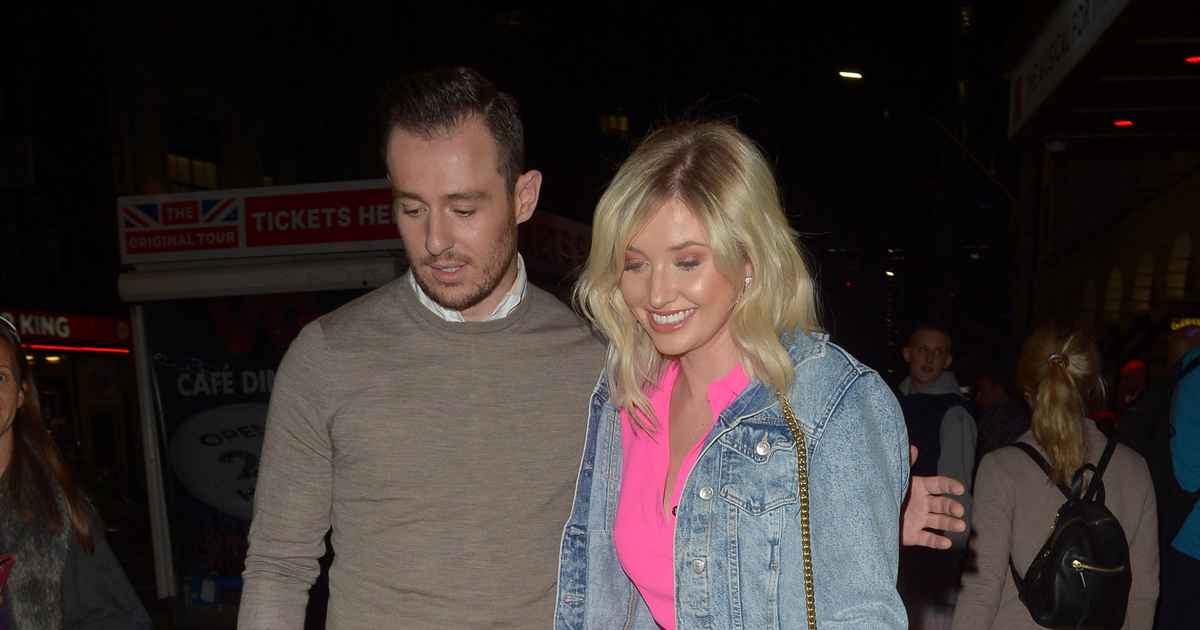 Amy, 27, stunned in a bright pink midi dress and nude heels, as she wore her blonde bob down in soft waves.

The former air hostess was accompanied to the musical by actor Dale, who planted a kiss on her cheek in a video she shared to her Instagram stories.

Telling her followers that she was "back with my lovely Dale", he leaned in and kiss her on her cheek as she beamed.

After the show as they left the theatre, Amy told her fans that she had her suitcase with her as she was "travelling everywhere" and was going to stay the night with Dale, who is a theatre actor whose credits include Kinky Boots and Miss Saigon.

He was a dapper companion for Amy, as he looked stylish in a brown sweater over a white shirt with jeans and brown suede Chelsea boots.

While many of Amy’s followers questioned if romance was blossoming between Amy and Dale, she soon confirmed that the pair are just friends.

Sharing a picture of them on her Twitter account, she wrote: “Great night at @BigTheMusical with my ‘hunky companion’ who as it happens is looking for a hunky companion of his own.”

The theatre-loving reality star also praised Big The Musical, writing: “So @BigTheMusical is fab, great songs and so much energy from the company! Great performances from @JayMcGuiness and @KimberleyJWalsh and @lorihaleyfox stole the show for me!”

It comes after Amy – who is reportedly torturing herself with clips of herself and Curtis in the villa – spoke out on rumours of a rift with her fellow islander, Molly-Mae Hague.

Rumours of a fallout started after Amber Gill, Belle Hassan, Yewande Biala, Francesca Allen, Anna Vakili and Amy all gathered for a girly sleepover following their stint in the villa.

However fans were quick to point out that Molly-Mae Hague was absent from the girly night and rumours were sparked even further when a number of Love Island stars, including Lucie Donlan and Yewande, claimed they weren’t invited to Molly-Mae’s star-studded launch for her Pretty Little Thing launch.

Amy has now spoken out on a rumoured feud between this year’s stars, claiming it was “out of order” that she was attacked for Molly-Mae’s absence.

Speaking to The Mirror, she said: “I got so many comments, where's Molly? Where's Maura? Where's Lucie? You lot [trolls] were out of order. It wasn't my sleepover. [It was Anna's.] I posted the picture.

"If you had a friendship group of 36 people or 18 girls, how often would you all get together? Say we're shift workers, we don't have 9-5 schedules."

Amy went on to insist she “loves” the social media influencer as she gushed over her relationship with Tommy Fury.

She said: “I love Molly! She is so busy! They [Molly and Tommy Fury] are in Vegas at the moment. I messaged her this morning, Vegas is my place.

"We all know it is crazy at the moment but we are all working in London."

Amy has been vocal about the trolling she has received since she left the villa.

However, she announced that she is no longer going to respond to cruel comments as it “feeds” them.

She said: "And so…I hereby announce my retirement from the sassy troll replying. It was fun whilst it lasted but after reading Dr Imrans report it made me think about feeding those pesky trolls.

"They want a reaction and I need to stop giving them one no matter how funny I think it is….x." [sic]