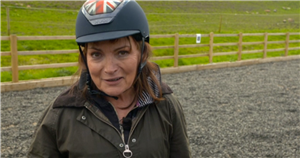 Television legend Lorraine Kelly has finally faced her fear to get back on a horse, 10 years since she first suffered a terrifying accident while riding one.

The 62 year old presenter took on the challenge on Tuesday’s episode of Lorraine, with the popular Scotswoman admitting she hadn’t been able to go near a horse since suffering a horrific accident in 2012, which saw her rushed to St.George’s hospital in London for life saving treatment.

“I still haven’t been able to go near a horse… ever since I’ve not really had any experience with horses,” said Lorraine.

Yet despite her fear and traumatic experience, late last month the telly star visited 14-times Paralympic Gold medalist Sir Lee Pearson near his home in Stoke on Trent, where the two began to work together to overcome her fear.

“That unfortunate, terrible accident is enough to put anyone off horses. It was very traumatic, it was totally understandable…” said Sir Lee.

He then continued: “I do understand that fear. I probably have a degree of fear every day I ride, because they are three-quarters of a ton of horse and I still think everyday that it’s amazing that they allow me to sit on their backs.”

In response, Lorraine said: “I obviously trust you implicitly, but I have to get over that [fear]. You can’t have that fear, you have to confront it sometimes and get over it…”

The short segment then saw Lorraine meet the horse she was due to ride, Zion, who won Sir Lee a gold medal at the Olympic Games back in 2016.

“I’m feeling a wee bit anxious, but not as bad as I thought it would be. I think that’s because I’ve got Sir Lee beside me and he’s given me a lot of confidence…” confessed the star, before emotionally continuing: “This is a massive step forward, just actually standing here so close [to a horse]. I haven’t done that for ten years.

“I’m just not sure if I can get on though, I’ll try… I still feel a little bit uncomfortable, so we’ll just see what happens.”

With a little more encouragement and support from Sir Lee, Lorraine then donned his championship hat from the Tokyo Olympic Games as she successfully mounted the horse.

Once astride the horse, tearfully Lorraine said: “Oh my goodness me! Not in a million years, I never thought I would do this.”

To which Sir Lee promptly responded: “You’re going to have me crying in a minute!”

The ITV presenter proceeded to trot around the field, prompting Sir Lee to admit: “It was very emotional… She stayed on Zion’s back a lot longer than I expected, what more could you ask for?…

“I’m unbelievably proud of Lorraine. Very flattered that she chose my home and one of my horses to get over this remarkable incident that happened to her. Just a great day!”

Following her amazing achievement, Lorraine could hardly believe it as she emotionally signed off the clip.

She said: “I have to say, that was much more emotional than I thought it would be. I couldn’t have done it with anybody else, apart from Sir Lee. He’s just brilliant, has given me so much confidence. And that beautiful, beautiful horse!… That was incredible, thank you so much.”

Fighting back the tears, Lorraine concluded: : “I’m not going to feel frightened anymore. I’m not, I’m not and that’s a huge, huge, big deal for me, it really is. Yep.”

Lorraine airs weekdays from 9am on ITV & ITV Hub

For all the latest showbiz stories, sign up for OK! 's daily newsletter here .