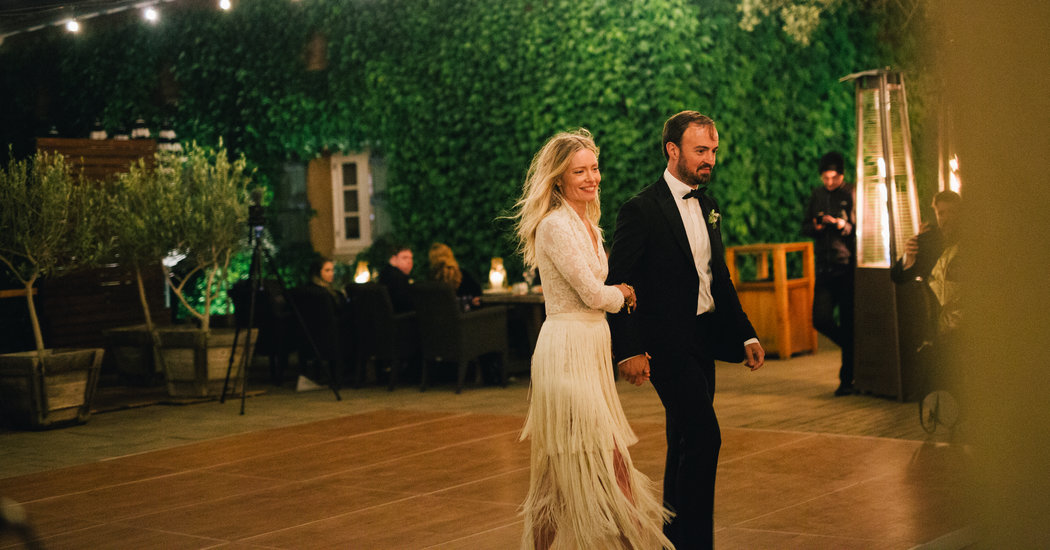 Long before he joined Brooke Geahan at the altar, Brian Nicholson fully understood the meaning of the “in sickness and in health” part of the wedding vows. For most of their courtship, Ms. Geahan was so ill the “in health” portion was in question.

The two met in December 2014 at the home of a mutual friend in the Catskills. Ms. Geahan, now 40, was then battling Lyme disease, so along with warm clothes she also packed liquid antibiotics and an avalanche of vitamins.

A summer tick bite had dropped Ms. Geahan to a low beyond her imagining. Ms. Geahan, formerly wildly social, an avid tennis player and a mainstay of New York City’s downtown literary scene, couldn’t leave her apartment for days at a time because of the illness. At the Catskills house, she ensconced herself in a “sick fort,” wrapping herself in blankets and nesting into a couch with Paddington, her beloved rescue dog.

On first impression, Mr. Nicholson thought Ms. Geahan was the most beautiful woman he’d ever met. His second impression? That she was really sick. 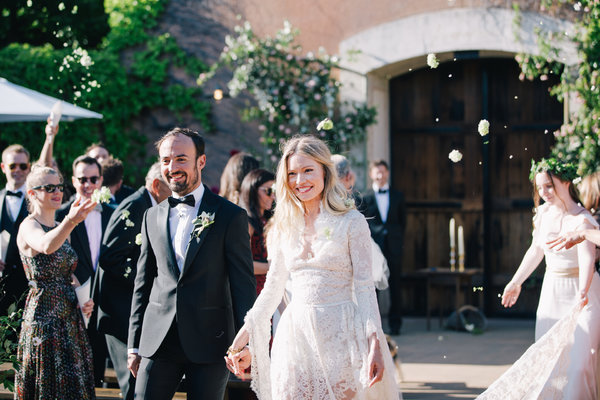 Though friendly and warm, she moved slowly and rarely, sometimes needing help just to walk. Still tender from recently losing his father to cancer, Mr. Nicholson soon joined Ms. Geahan in the fort where they bonded over life’s challenges.

Theirs was an easy connection. Throughout the weekend, while others played outside in fresh snow, they talked about literature and films and the complexities of their careers. “When you meet people this beautiful they usually talk about themselves, but Brooke was down to earth, intellectually curious, and interested in me,” said Mr. Nicholson, now 37.

They also shared their paths to the present. Ms. Geahan’s Arizona childhood was spent playing classical violin. In 1998, at the age of 19, she graduated from Bard College at Simon’s Rock in Great Barrington, Mass., and then worked abroad as a journalist before returning stateside in 2000 and writing for magazines. In 2004, she founded the Accompanied Literary Society, a nonprofit literary club for which she curated book launches and salon-like parties attended by boldfaced names.

As the charismatic host of what grew into a glamorous literary scene, Ms. Geahan was always at the ready with champagne and a witty story, but in reality her job was far less fancy. “I was likely the only person without family money running a nonprofit in New York,” she said. “I played hard, worked hard, and though it was a lovely sacrifice, I mostly lived as a pauper.”

Her romantic life matched the beat of her lifestyle; her beaus included art gallery owners and film directors. “Brooke dated guys with big egos, big personalities, or those that wanted to date her because of who she knew — to be honest, I worried about her,” said Batsheva Hay, a fashion designer and one of Ms. Geahan’s close friends.

Ms. Geahan acknowledged she had “some deeply meaningful relationships with creative, interesting men, and also made some poor choices and kissed some frogs.”

But in 2012, while she was undergoing treatment for melanoma, a relationship headed to the altar ended abruptly. As yet unaware of her looming fight with Lyme, Ms. Geahan reined herself in from romantic attachments to focus on her health. She summarized the two years before meeting Mr. Nicholson as “sick and single.”

Mr. Nicholson then was also single, as well as an outsider to New York. Raised in Pasadena, Calif., he graduated from Brown University in 2004 with a degree in political science, after which he moved to San Francisco and worked in investment banking. In 2009, he moved to New York City, where he started an online men’s apparel line. He, too, had been engaged, but under the stress of his father’s illness, that relationship fell apart in 2013.

Against this weighty backdrop, during that first winter weekend the two developed an arguable bond but with no frisson of romance. Mr. Nicholson felt a tinge smitten, but he was also a realist. “It’s crazy to think of someone that ill out of your league, but that’s what I felt,” he said. Instead he pinned his hopes on a possible friendship.

Ms. Geahan had zero energy for any starry-eyed attachment. “I was older than Brian, miserably sick, and broke from treating Lyme,” she said. “I was not a great catch.”

Over the next few months Mr. Nicholson kept their connection warm with friendly emails. Ms. Geahan was busy pursuing various treatments for both Lyme disease and what became reoccurring melanoma. In 2015, she began stinging herself with up to eight live bees several times a week, a treatment called bee-venom therapy. (The efficacy of the treatment is unproven in peer reviewed studies.)

By the summer, Ms. Geahan, who credited the bees with her recovery, had gained strength and optimistically set about organizing a house share on Shelter Island, N.Y. Mr. Nicholson jumped at the opportunity to join in, and soon the two were spending quiet Friday nights at the island’s Vine Street Café.

Their friendship intensified. One night, Mr. Nicholson exposed deeper feelings, but for Ms. Geahan, a relationship was still untenable. “I was a total freak who didn’t eat regular food, couldn’t drink, couldn’t exercise, couldn’t dance, and was stinging herself with bees every other day,” she said. “I didn’t want to be a burden to anyone.”

Midsummer, after another experimental drug therapy, Ms. Geahan landed in the intensive care unit at Mount Sinai with a serious bacterial infection. Mr. Nicholson immediately made his way to the hospital. From a feverish sleep, she woke to find her friend by her side. “In that very moment, I knew I was in love with Brian,” she said.

Yet she kept this realization to herself.

By late August, Ms. Geahan recovered enough to return to the summer house for the season’s last (quiet) hurrah. Mr. Nicholson was out jogging when Ms. Geahan learned, from a mutual friend, that he’d recently had a pretty successful date. Seized by an urgency that kicked in her courage, she phoned Mr. Nicholson and summoned him to the beach.

Ms. Geahan paced ankle deep in the surf, and when her friend appeared, she hastily professed her love. Falling into each other’s arms, the two shared a first kiss.

A month later they moved in together, and over the next several years they settled into a new normal of full health and partnership. Mr. Nicholson steered his business interests into healthy foods; he is now a private equity investor and managing director of Sonoma Brands. Ms. Geahan started the Heal Hive, a wellness platform focused on bee-venom therapy for which she conducts workshops and coaching for those with Lyme disease.

The question regarding marriage was never if — but when. In 2017, while attending a wedding in Italy, the couple took an unexpected phone call: Ms. Geahan’s mother, who was also fighting melanoma, now faced a terminal diagnosis. Devastated by the news, and fueled by the hope their wedding could be attended by her mother, Ms. Geahan found the perfect symbol for their official engagement. It was a ring featuring a carving of a resting warrior dating to the first century. “It symbolizes that the warrior within us can now rest, we are each other’s solace and security,” Ms. Geahan said.

Tragically, Ms. Geahan’s mother died within weeks, though with the knowledge that her daughter had successfully fought her own health battles and paired with a stalwart trouper with whom she would face any future strife.

On May 11, the couple joined 120 friends and family at the Viansa Sonoma winery in Northern California wine country, where the couple recently bought a home and have now settled. Under a clear blue sky, guests gathered in the warm afternoon on a Tuscan-style patio flanked with rose bushes and grapevines and a picture-perfect view of Sonoma Valley’s vineyards and fields. Ms. Geahan, who arrived by way of a shady pathway with several attendants assisting with her trailing lace train, greeted her groom with a lengthy and passionate kiss.

William Rivett, the groom’s best friend who was ordained by the Universal Life Church, officiated at the short ceremony, which was highlighted by commentary from the novelist Salman Rushdie, a longtime friend to the bride. She had met him years ago at a poetry reading.

Offering his thoughts on love and marriage, Mr. Rushdie began with a wry allusion to his own oft-married life (four, but who’s counting). “I guess that shows that I’m an optimist about the institution, and its possibilities,” he said, to the guests’ delight.

Mr. Rushdie then aligned the creation of literature to that of a lasting marriage. “It takes patience, understanding, determination, passion, tenderness, tough-mindedness, originality, desire, imagination, and love, above all, love,” he said. He said he hoped the couple’s marriage would take “its place amongst the classics.”

During the ceremony, Mr. Rivett pointed out that while a single bee only makes a teensy bit of honey in its brief lifetime, a hive’s worth of bees collectively sustains the hive and its offspring. “Like a bee, neither of you can do this alone,” he said, before the bride and groom exchanged brief vows and were presented as married to the cheering crowd.

As the couple exited, they were showered with white hydrangea petals. “So many ill people think love will never happen,” Ms. Geahan said, “but with love both people get stronger.”

Healthy Dining The menu featured dishes that were dairy- and gluten-free and organic, like “carrots in edible earth,” made with cracked cocoa nibs, fava beans and edible pansies. All the food, from the olive oil and almonds to pasture-raised beef, were sourced within 50 miles of Sonoma County. A custom syrah displayed the couple’s crest of bees and their motto: “Amor vincit omnia,” or Love conquers all.

The Buzz The signature drink was the “Pollinator Martini,” which included crushed pollen and a spray of bee propolis. Scattered on the tables were small squares of chocolate made with bee pollen, rose petals, rose hips, and “magical mushrooms” — but not, presumably, of the hallucinogenic sort.

Bespoke and Bedazzled The bride’s dress of cream-colored lace was crafted in collaboration with the fashion designer Marc Bouwer. A short romper with a plunging neckline was topped with a lace overskirt and train. A full-length tulle veil echoed the beekeeper vibe. For dinner, the bride swapped the overskirt for one with three tiers of jazzy fringe. Paddington, the bride’s dog, sported a tuxedo.

Be Chill When the sun dropped behind the mountains, the fog rolled in. Guests huddled around heat lamps, wrapped in hoodies, blankets, and even spare tablecloths. The bride slipped on a black biker jacket, giving her gown a downtown edge.

Reader Callout: What is your favorite wedding gift? 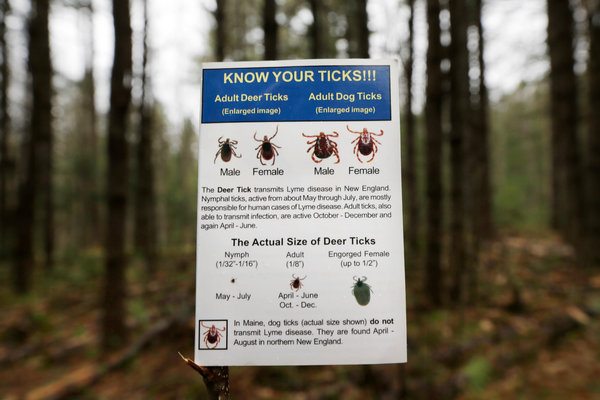 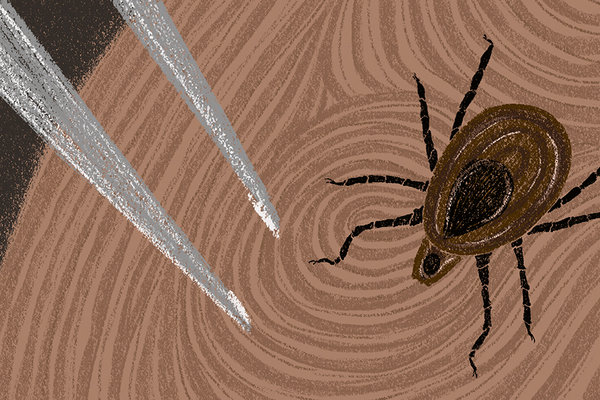