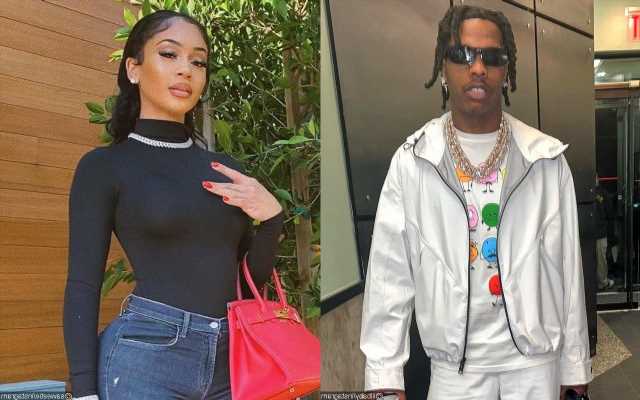 The ‘Drip Too Hard’ rapper previously appeared to throw shade at the ‘Icy Girl’ hitmaker for posting his photo without his permission on his new song ‘Not Finished’.

AceShowbiz –Lil Baby has once again distanced himself from Saweetie despite their past dating rumors. Asked about a photo that fueled their alleged fling last year, the Atlanta native denied that he was the man in the picture with the “My Type” femcee.

The photo in question, which first surfaced in November 2021, featured Saweetie sitting on a lap of a man, whose face was hidden behind her body. After some digging, Internet sleuths were convinced that the man was Lil Baby due to their similar outfits.

In a new interview with “Big Facts” podcast, Lil Baby was asked if he was the mystery man in Saweetie’s post. “Nah,” he said, before cracking a smile that caused everyone to laugh. He admitted though that he does “have to like, move a certain way…and I be trying my best.”

Lil Baby was romantically linked to Saweetie after her split from Quavo. At the time, it was reported that the “My Turn” spitter took the “Icy Girl” hitmaker on a $100,000 shopping spree. He, however, shut down the claims as he appeared to take a shot at the Migos star on “Stand on It”. On the song, he raps, “I don’t want your b***h, we can’t swap out (Swap out)/ They ain’t on s**t, tell ’em to pop out (Pop out).”

The 27-year-old also seemingly slammed Saweetie for posting a picture that fueled their dating rumors with the song “Not Finished”. “She post a picture without my permission, got me in some s**t, man, these women is wild/ She f**kin’ n***as, but think I don’t know, that s**t really a joke man, lil’ mama’s a clown,” he spits his bars.

Lil Baby, however, denied he’s feuding with his Quality Control labelmates. Appearing on 97.9 Jamz’s “Posted on the Corner” earlier this month, he noted there was no “underlying issue” between him and the hip-hop trio. “I be wanting to comment on that type of stuff, but when I comment on something, it just make it bigger,” he claimed.

“People send me s**t and I be wanting to comment, but then I be feeling like that’s just gon’ make it even more [big],” the Grammy Awards-winning artist continued. “They know I ain’t got nothing going on with them.”