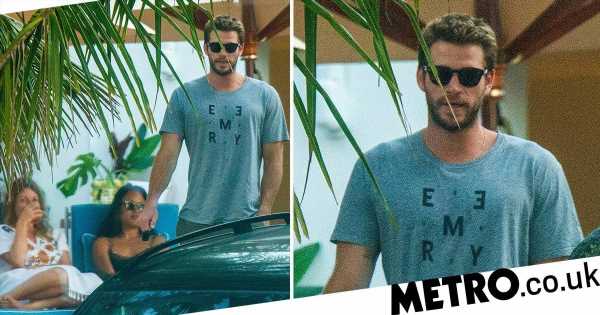 Liam Hemsworth has been spotted out and about in Byron Bay, just days after announcing his separation to Miley Cyrus.

The 29-year-old appeared to visit a bar in the Australian beach town with friends as he sported a casual t-shirt with a pair of sunglasses.

There has been plenty of speculation as to why the couple split after seven months of marriage.

It was previously reported that Liam had been left ‘heartbroken’ after pictures emerged of his popstar ex kissing Kaitlynn Carter, who recently split from Brody Jenner, as the two were on holiday together in Lake Como in Italy.

A source told Page Six: ‘He was heartbroken and blindsided by those photos.

‘They are still married and they really did love each other.’

Miley is clearly enjoying the company of Kaitlynn, as the two also spent time with Miley’s mother, Tish, in West Hollywood.

There has also been claims that Liam’s ‘partying’ and substance use was to blame for the split between the two.

While sources from Liam’s side claim that Miley going back to her old ways led to their break up, as the actor wanted to ‘settle down’.

This comes just after Miley dropped her latest single, Slide Away, which is lyrically about feeling ‘lost’ and ‘letting go’ of a relationship.

In particular, the lyrics ‘move on, we’re not 17, I’m not who I used to be,’ could be interpreted to link to the couple’s breakup.

Miley and Liam have had an on and off relationship, with the pair first meeting on the set of the film The Last Song in 2009.

The two got engaged in 2012, before calling it off a year later.

They reconciled in 2016, and married at their Tennessee home in December 2018, before calling it quits this August.