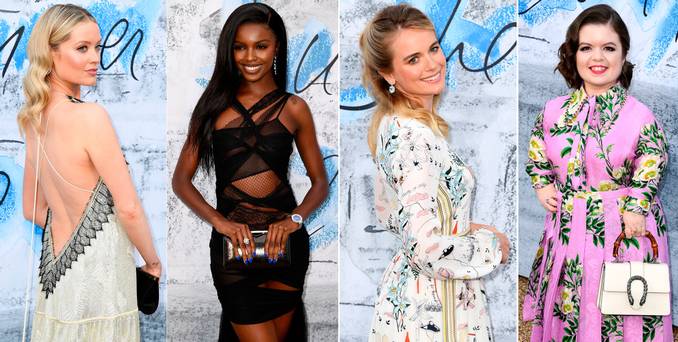 The exclusive bash invites influential people from all around the UK to celebrate the 2019 Serpentine Pavilion, with a VIP guestlist often featuring royals and A-listers. This year’s party, co-hosted by Chanel, was a gathering of well-known faces, including plenty of Irish. Laura Whitmore made her party debut in a backless shimmering dress by Amanda Wakeley, the quintessential boho chic British designer.

The actress, still best known for her relationship with ex-boyfriend Prince Harry, is a regular at the event and brought her signature understated style in a printed maxi dress by Tory Burch and platform wedges.

The supermodel was one of the few guests to brave a shorter hemline in the form of a blue and white striped design by Chanel, including a pair of the brand’s new season diamond drop earrings.

Victoria’s Secret’s newest Angel brought the contemporary edge that made her an overnight star, happily posing in a cut-out bandage dress with tulle train.

Since moving to Wales (temporarily), Lena has been making the most of her time this side of the Atlantic and commanded attention in a satin fringe mini-skirt with a t-shirt emblazoned with, ‘Would you go to bed with me?’

Suki was the quintessential Chanel muse in a monochrome number, wearing the same top that Margot Robbie debuted at the Cannes Festival and pairing it with platform heels.

Few people could pull off a semi-sheer lace jumpsuit, but few people are Jenna Coleman. The 33-year-old actress led the best dressed at last night’s event.

Rounding out Chanel’s influence on the most high profile guests in attendance, Felicity’s breathtaking tweed jumpsuit with wide leg and plunging neckline is a lesson in summer attire where unpredictable weather is your backdrop.