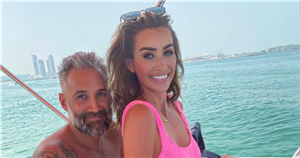 Laura Anderson and Dane Bowers have reportedly had a "big row" and are now "taking a break" from their romance.

The lovebirds confirmed they had rekindled their relationship in May, and later that month, they moved into their new home in Dubai.

However, the pair have appeared to hit a bump in the road, with reports emerging that the 32 year old Love Island star and the 41 year old singer are deciding to "spend some time apart".

"Dane and Laura had a big row last month. Things had been going well, but now it seems like they have hit a bump in the road," a source told The Sun.

It was added by the publication: "Officially, they are still together, but they have decided to spend some time apart."

OK! has contacted representatives for Laura and Dane for further comment.

The pair previously dated three years ago, but Laura called things off when she discovered the Another Level singer had been unfaithful.

The Scottish star, who finished runner-up on the 2018 series with Paul Knops, has admitted she applied for Love Island following their break-up.

And things appeared to be going well, with Laura recently revealing that she and Dane were "trying" for a baby.

Talking to her followers during an Instagram Q&A on her Stories in June, Laura responded to a fan who asked: "Do you want kids at some point in the future, if so when?"

She added with a laugh: "God, it's hard work! Get off me!" she laughed at her partner.