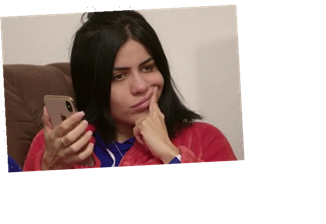 On this week’s episode of 90 Day Fiance: Happily Ever After?, Larissa Lima faced a horrifying betrayal.

She learned that Eric had badmouthed her left and right, degrading her character and even sharing intimate details about her to total strangers.

Last week’s 90 Day Fiance: Happily Ever After? ended with Larissa getting kicked out by her friend, Carmen Nys.

Whether it was arranged beforehand for TV drama or just Carmen trying to give her good friend a wakeup call, Larissa had to move out and move on.

When that happened, she knew just whom to call … her “Little Kitten,” Eric Nichols.

Larissa had only recently made peace with her ex after a messy, messy breakup.

She called him up to see if she could move in with him — but, to be smart, she wanted her own room.

Fortunately, Eric lives in a three bedroom house, so there was room for Larissa — and for his roommate, David.

Living with roommates is a day-to-day reality for, well, most people given our dystopian economy.

Larissa even concocts a plan to bond with him over shared interests like video games.

While we are absolutely begging TLC to show more of Larissa’s “closet nerd” side, we won’t hold our breath.

Video games don’t make for good reality TV, because watching people make pleasant choices on how to spend their time is antithetical to what reality is all about — drama.

But never fear — Larissa’s life has no shortaga of intense conflict, as the video clip that we have included conveys.

We would like to believe that this scene was arranged in advance (not scripted of course, just planned), because it starts with Larissa going through Eric’s phone.

If someone did that in real life, we would feel very differently than we do about it when it comes up on screen.

Larissa find a woman in his phone, a contact, and possibly against her better judgment, decides to give “Natalie” a call.

It turns out that Natalie (who presumably gave 90 Day Fiance permission to share her end of the phone call) met Eric in Colorado Springs.

This would have been shortly after his breakup with Larissa, when he was still intensely bitter. So, September or early October 2019.

According to Natalie, Eric was badmouthing Larissa to everyone from his own parents to Natalie, who was a complete stranger.

Larissa acknowledges that this seems to fit with Eric’s personality, likening him to a friend who betrays and then badmouths you behind your back.

Or, more specifically, she calls him a “bitch.” That’s a far cry from her “little kitten.”

But what sorts of things was Eric allegedly saying about Larissa to anyone and everyone who would listen?

For one thing, he was telling people that she is “crazy.” Larissa has said that herself, but only jokingly.

A lot of men say that about their ex-girlfriends, but it doesn’t make it nice or true or acceptable.

(As comedian Donald Glover has noted, women rarely say the same, as women with “crazy” ex-boyfriends tend to be murdered by them)

This is where things get more disturbing, as it is revealed that Eric not only met with Colt Johnson for an ill-advised photo op, but compared notes.

That’s right — Larissa’s ex-boyfriend discussed her intimate details and sexual behavior with her ex-husband to get revenge on her after their split.

That included discussion of Larissa giving both men oral sex. This was disturbing to the point of nausea.

Larissa would like time to process what she has heard, but she will not get it.

Eric comes home, so she and the production crew go to her room where what she has heard sinks in.

Larissa resolves to confront Eric about this, with some prompting from producers. The episode ends on a cliffhanger … and we’ll se the conclusion next week.

Now, fans have correctly noted that Larissa admitted to badmouthing Eric to her friends, and that footage played in the very same episode.

However, Larissa presumably did not talk about details of her sex life with Eric — not the kind of intimate details that Eric did.

Additionally, he spoke about her to his parents, leading her to believe that their relationship has no real future since he has already poisoned them against her.