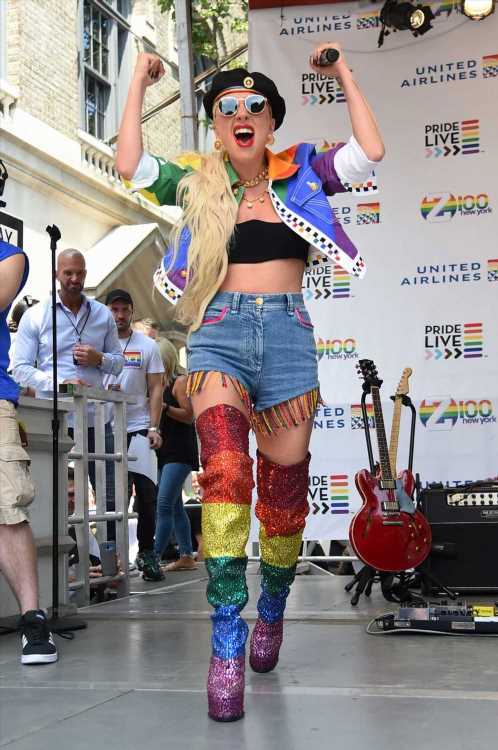 GLAAD officials had kept the Oscar-, Golden Globe- and Grammy-winning icon’s Friday appearance under wraps from thousands of revelers, as well as journalists, who had gathered in front of a temporary stage for Pride Live’s Stonewall Day Concert. True to form, Gaga didn’t disappoint, delivering an impassioned speech in which she reaffirmed her long-standing commitment to the LGBTQ community.

“It is said that those who threw the first brick on that historic night were members of the trans community,” she told the crowd, as seen in the video below. “And while we have made tremendous progress, we find ourselves also at a time where attacks on the trans community are on an increasing rise each day. I will not tolerate this.”

The event also featured a live performance by Alicia Keys, as well as appearances by Whoopi Goldberg, Andy Cohen, Chelsea Clinton and others.

Gaga joins a growing number of superstars to visit Stonewall Inn in recent months to celebrate the 50th anniversary of the historic uprising. Madonna appeared at the legendary venue on New Year’s Eve, performing acoustic renditions of her 1989 smash “Like a Prayer” and Elvis Presley’s 1961 classic “Can’t Help Falling in Love.”

Earlier this month, Taylor Swift also popped in, crooning “Shake It Off” with a little help from “Modern Family” star Jesse Tyler Ferguson and his husband, Justin Mikita. That evening also featured performances by Sara Bareilles and Broadway’s Gavin Creel, among others.

Watch Lady Gaga’s full speech at the Stonewall Inn below.