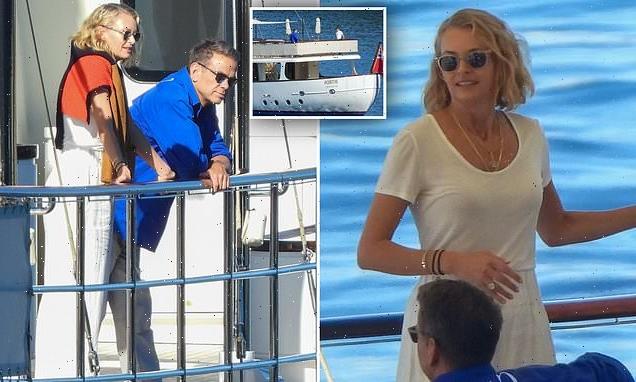 Lifestyles of the rich and famous! Lachlan Murdoch and wife Sarah look as happier as ever as they cruise around Sydney in their new $30million yacht after he jets home in his $90m private jet

He returned to Sydney in his $90million private jet on Thursday evening as he continues to fly back and forth between Australia and the US to manage his family’s media empire.

And Lachlan Murdoch was back in the arms of his beloved wife Sarah on Friday.

The couple enjoyed a cruise around Sydney Harbour on their new $30million 68-year-old superyacht ‘Istros’ with some fashionable friends, including Vogue Australia Editor-in-Chief, Edwina McCann.

Lifestyles of the rich and famous! Lachlan Murdoch and wife Sarah looked as happier as ever as they cruised around Sydney Harbour in their new $30million yacht on Friday 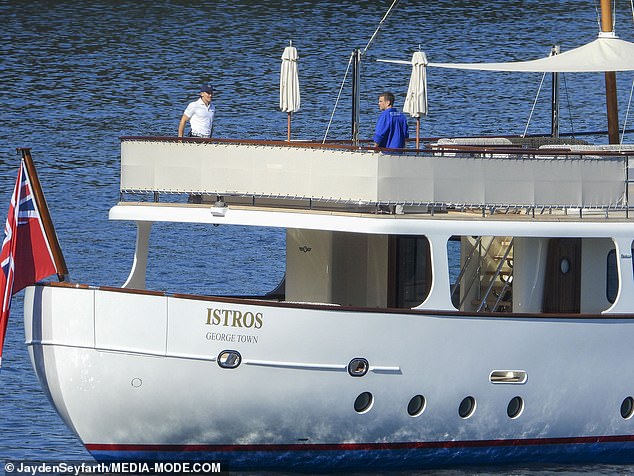 The pair, who have been married for 23 years, looked as happy as ever as they lapped up the sun onboard the vessel and enjoyed the stunning harbour views.

A barefoot Sarah was incredibly chic in a pair of cream linen trousers and a white T-shirt.

She accessorised with designer sunglasses and expensive jewellery, including her rarely seen diamond engagement ring. 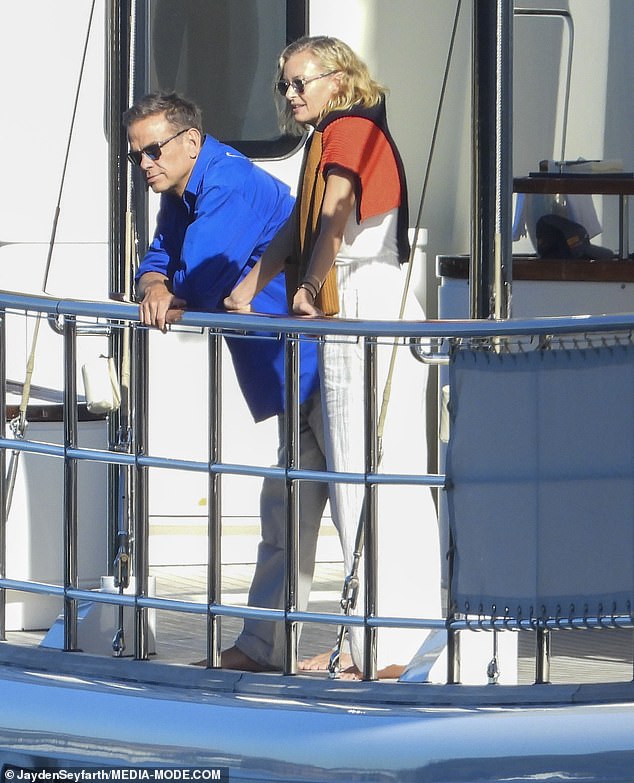 Effortless: A barefoot Sarah looked incredibly chic in a pair of cream linen trousers and a white T-shirt 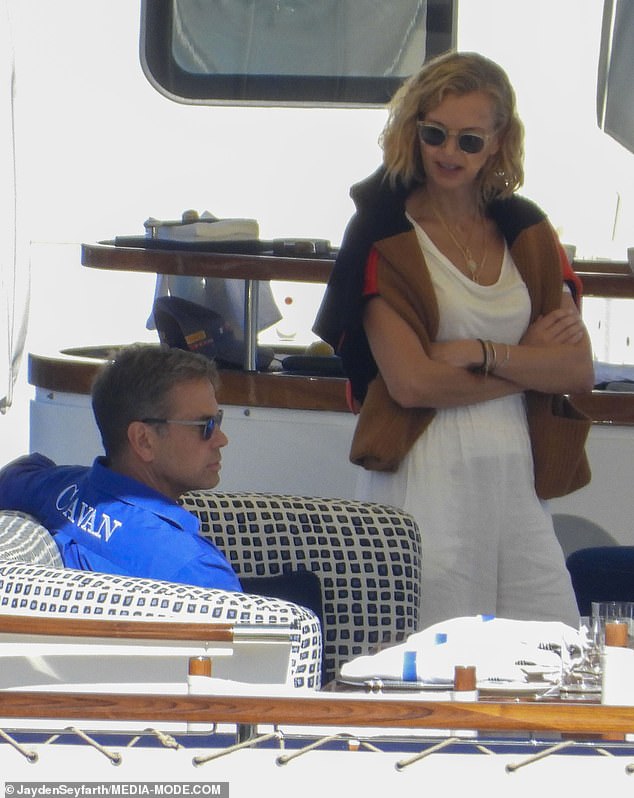 Keeping warm: As the day got chilly, she wrapped a colourful sweater around her shoulders 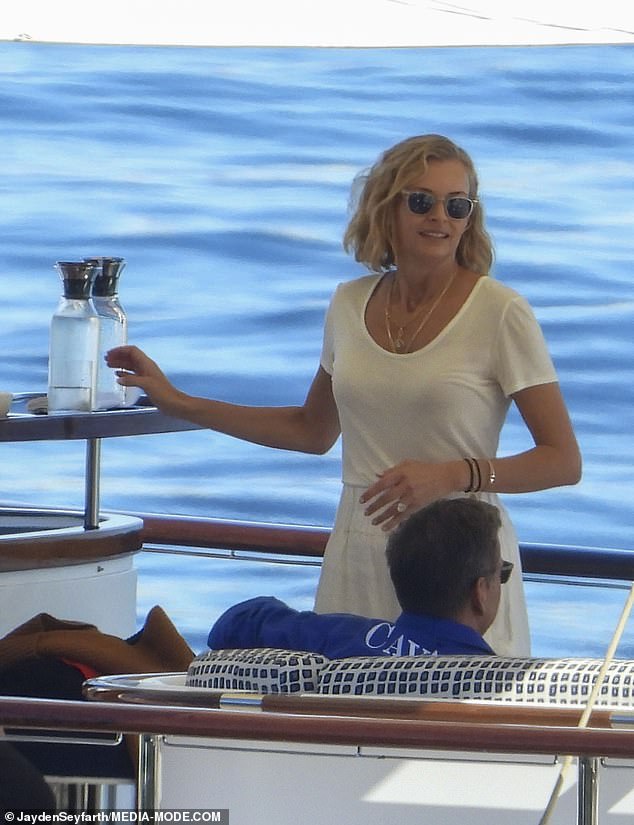 Hydrating: The couple sipped on chilled water from the yacht’s bar

As the day got chilly, she wrapped a colourful sweater around her shoulders.

Meanwhile, Lachlan stood out in a bold blue shirt and grey trousers as he walked around the yacht with a beverage in hand.

The News Corp co-chairman last visited Sydney in April when he stopped by after a trip to French Polynesia with his family. 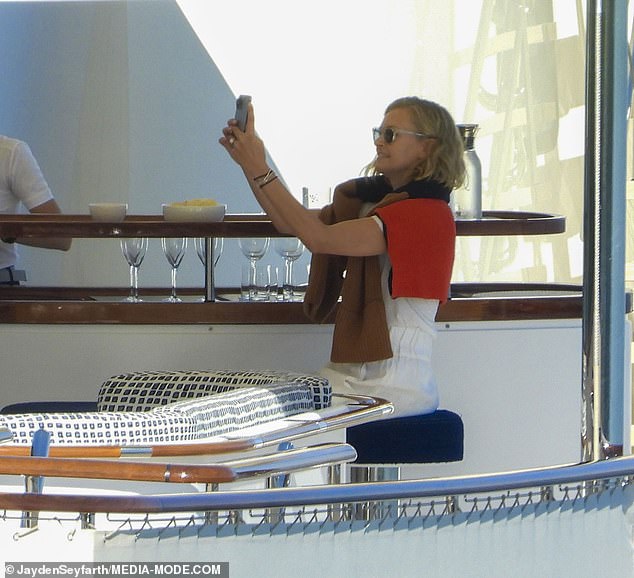 But first… let me take a selfie! The blonde beauty was seen taking selfies aboard her new toy 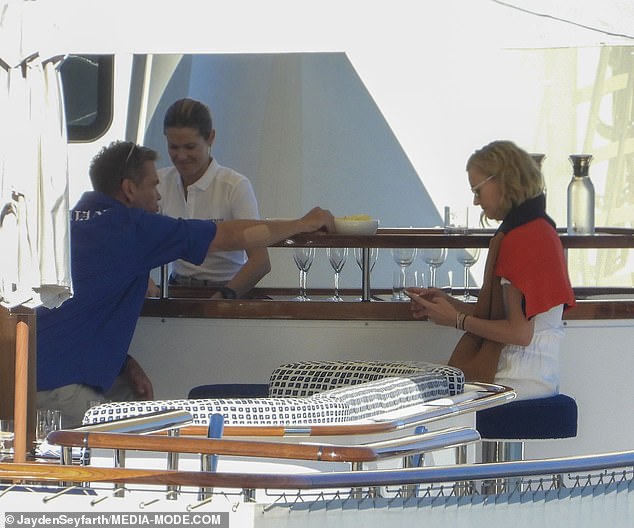 At your service! The couple enjoyed some potato chips as they were served by a stewardess 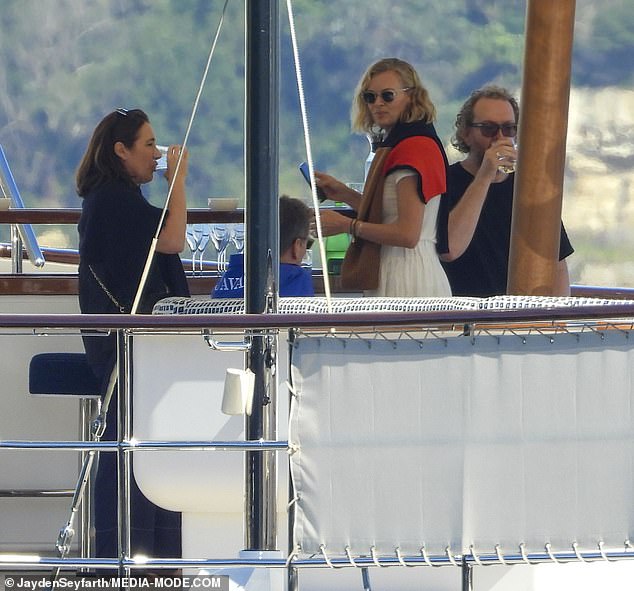 Before then, he had visited Australia in February with commentator Piers Morgan.

During the Covid pandemic, it looked as though the Murdochs planned to settle Down Under permanently.

Lachlan and Sarah are parents to sons Kalan Alexander, 17, and Aidan Patrick, 16, and daughter Aerin Elisabeth, 12.

In April last year, the Sydney Morning Herald reported the Murdochs could be staying in Australia ‘for years, not months, as initially believed’.

The couple, who own a home in Bellevue Hill, known as Le Manoir, married in 1999.

The couple purchased their superyacht Istros earlier this year.

It is likely to be moored where the family have moved and recently purchased a $38million ‘boat shed’ at Wunulla Road, Point Piper.

The rebuilt 42-metre 1954 classic Istros was once once by the Pappadakis shipping dynasty.

The motor yacht is considered an iconic vessel.

It won the grand prize for the best restored vessel at the Monaco Yacht Club Prada Classic Yacht Show in 2001.

But it fell into disrepair and was little more than a rusting hulk when it was rescued from a Maltese port in 2015, salvaged and rebuilt.

The interiors were redesigned in ‘chic Scandinavian style by Van Geest Design’, the Robb Report said.