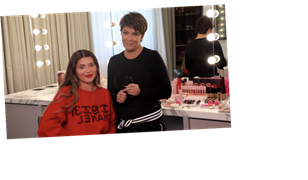 Kris and Kylie Jenner are a mom-daughter duo like no other. Of course, the momager loves all of her kids equally, but it’s Kris’ bond with Kylie, her youngest, that shined in a new video, proving just how close the two are. Kylie Jenner’s reaction to Kris Jenner doing her makeup is absolutely priceless.

Kylie enlisted the help of Kris for a YouTube video published on Monday, Oct. 12, titled, "My Mom Does My Makeup," and the results are epic. The 11-minute video starts with a nervous Kylie pointing out that her mom isn’t bad at doing makeup, it’s just that Kris’ style isn’t quite the same as Kylie’s. “It’s not that you aren’t good at makeup," Kylie told Kris. "You’re just not my vibe."

Kris went on to explain that she planned to give Kylie an ’80s look, which Kylie said terrified her. "We’re bringing back the ’80s!" Kris exclaimed. "You just sit back and relax."

After a few initial makeup steps, Kylie calls her real makeup artist Ariel Tejada to let him in on the fun. "You’re not going to believe what’s happening right now,” Kylie says before Kris takes over the FaceTime call. "I’m doing Kylie’s makeup for her YouTube channel,” Kris says. "I’m channeling you."

It’s then when the fun really begins. All seems to be going well until Kris decided to use a bronzer stick on Kylie’s chin. After Kylie told her no, the makeup mogul pulled back and apologized, telling her mom it was up to her what she wanted to do. Watch it all starting at the three minute mark below.

At the 5:15 mark, Kylie and Kris can’t contain their laughter as Kris hilariously messes up Kylie’s eyeshadow. "I’m going to fix it," Kris says as Kylie fights to hold back more laughter. "It’s the ’80s."

While Kylie was a good sport through it all, she did start giving pretty funny commentary around the 8:10 mark when she starts referring to all of Kris’ brush choices as "interesting." In the end, Kylie says she was "pleasantly surprised" with how the look turned out.

Regardless of Kylie’s real feelings on her mom’s makeup job, the video was so much fun to watch and Kris is truly not so bad at the whole makeup artist gig.