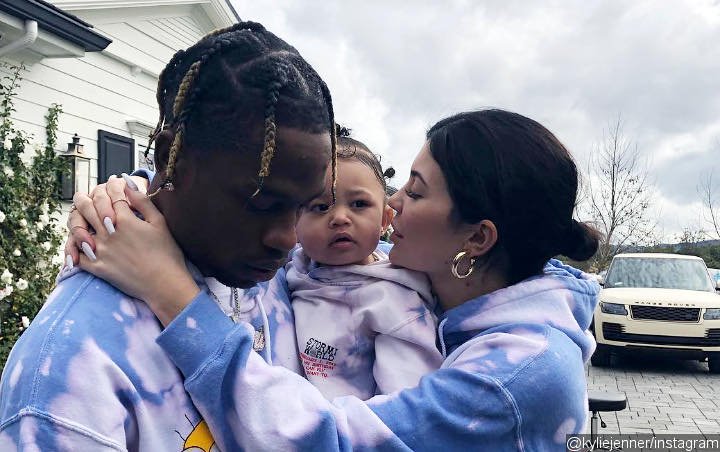 Fans were speculating whether or not the lovebirds, who share Stormi Wesbter together, had broken up after they noticed that a framed photo of them in her walk-in closet had gone missing.

AceShowbiz -Phew! Kylie Jenner and Travis Scott (II) are still together, after all. Less than a day after the makeup mogul got fans wondering about the status of their relationship, she has assured them all is fine in their relationship when she posted on Instagram Stories on Wednesday, September 18 a new photo of the couple with their daughter Stormi Webster.

Featured in the said photo were a series of what appeared to be the 1-year-old girl’s colorful finger paintings. Just above the paintings, Kylie put an adorable photo of the three of them. Both Travis and Stormi were twinning in black, with the rapper looking up and opening his mouth wide. Meanwhile, his daughter also looked in the same direction, though she appeared confused. As for Kylie, she placed a kiss on Stormi’s cheek.

“Happy Wednesday,” she said in the caption.

Breakup rumors between Kylie and Travis first emerged after fans noticed a missing framed photo of the lovebirds in her recent Instagram photo that was taken inside her walk-in closet. The framed had always been visible whether she took a picture there, but in her recent one, it had gone missing. In addition to that, her caption that read, “Ain’t a game, boy,” got people speculating whether it was about her rapper boyfriend.

One fan said at the time, “She removed the picture she had of her and Travis and the caption seems sus,” as another admitted to feeling shocked over this revelation, Meanwhile, someone else made another suggestion and said that there was a possibility that the “Keeping Up with the Kardashians” star merely moved it somewhere else.

Kylie and Travis started dating in 2017 after meeting for the first time at Coachella. The couple welcomed Stormi in February 2018. Prior to dating the “Sicko Mode” rapper, the Kylie Cosmetics owner was romantically linked to Tyga.