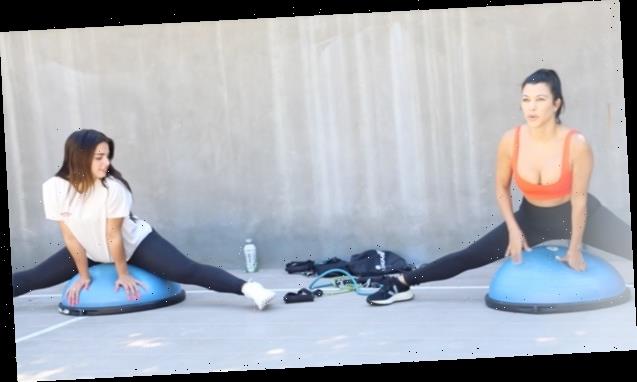 Addison Rae and Kourtney Kardashian have taken their friendship to YouTube. The duo filmed what they’ve been doing ‘every single day’ at Kourt’s Calabasas mansion!

Kourtney Kardashian, 41, and Addison Rae, 19, aren’t just hanging out — they’re hanging out every day! The unlikely duo revealed their mourning routine together in a vlog-style video, which Addison posted to her YouTube channel on Aug. 3. The TikTok star’s video also gave her 3.13 million subscribers a closer look at Kourtney’s massive estate in Calabasas, which the Keeping Up with the Kardashians star bought with her then-boyfriend, Scott Disick, for reportedly about $8.5 million in 2014.

At the beginning of the video, Addison hops into her Tesla and zooms away to Kourt’s pad. She’s greeted in the home’s luxurious yard by Kardashian family friend and singer Harry Hudson, 27, and they’re eventually joined by the famous homeowner. “This is my morning routine. It’s Camp Kourtney. This is what we do every single day,” Kourtney tells the camera, and the trio soon launch into a jump rope-intensive exercise led by the Kardashians’ favorite trainer, Don “DB DONAMATRIX” Brooks.

“We do this a lot. Actually we do it like six-seven days a week,” Addison admits after the cardio-heavy workout, proving just how close the dancing sensation has grown with Kourtney! Explaining how they started hanging out every day, Addison says, “It [the workout] was really hard. I just didn’t know if I would ever be able to do it again. But then I came back and then I kept coming back and here I am, just on day like 30,000 of working out with them.”

After sweating their calories out, the workout buddies treat themselves to the avocado pudding that Kourtney has been eating every day for the past five years (you can copy down the recipe from her website, Poosh). Kourtney revealed that they’re missing another “camp” member, Travis, although Kourtney didn’t reveal his last name (she’s close friends with Blink 182’s Travis Barker, and of course there is Travis Scott, the father of Kourtney’s niece Stormi Webster).

The hangout ends with a dip in Kourtney’s pool, and then the two change into coordinating teal and white co-ords to film a glam session for Poosh! When they’re not working out together, Addison and Kourtney are filming TikTok videos with Kourt’s 10-year-old son and fellow social media star Mason Disick. Mason was actually a fan of Addison’s first, and they met thanks to a surprise set up by vlog star David Dobrik, which Addison revealed on The Tom Ward Show in July.

Addison and Kourtney are growing so close, they recently confused fans with an Instagram post on July 31! Kourtney took Addison to hangout at the Kardashians’ 2020 summer hangout spot, a beachfront mansion in Malibu owned by socialite Diana Jenkins, where they snapped a cute photo. However, Kourtney left fans confused with the caption she settled on: “My husband’s girlfriend and I exchanging stories.”

Of course, this led fans to assume that Kourtney was referring to her ex, Scott, as her “husband” and Addison as his girlfriend. But, let’s be real — this is probably an inside joke only BFFs Kourtney and Addison will know!