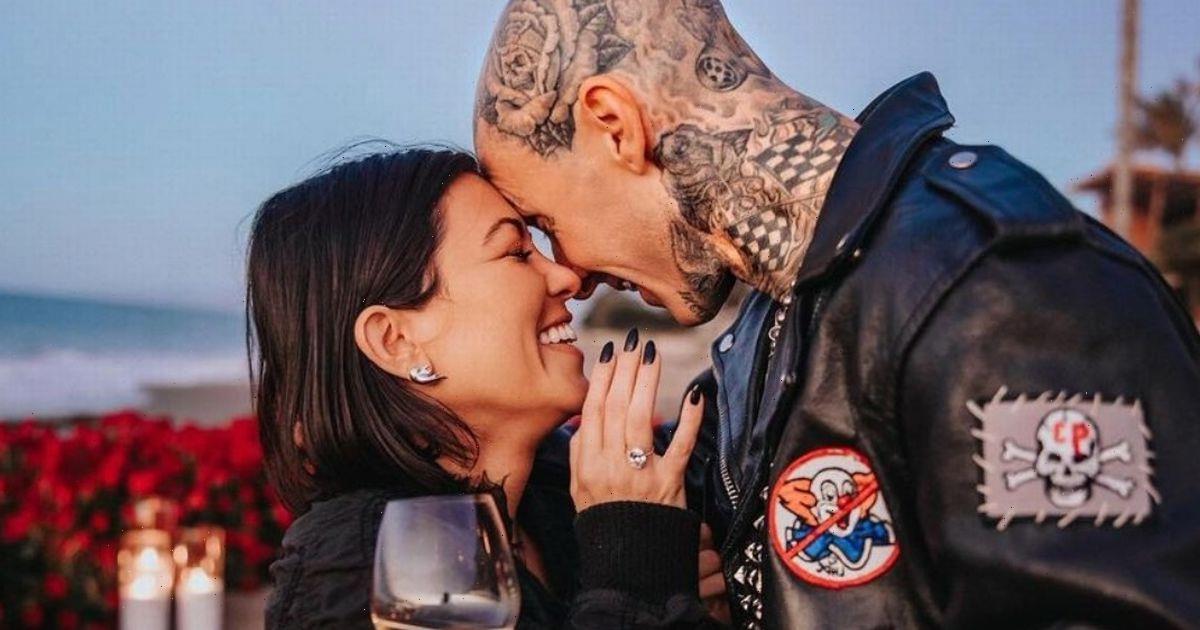 Kourtney Kardashian and her husband Travis Barker enjoyed a loved up weekend as the couple returned to the site of the engagement, California's Montecito Beach.

The pair have been married for two months and it appears as though their love is still strong, as they were seen packing in all the PDA they could as they laid on the sand together.

In one snap of the couple, Kourtney, 42, can be seen lying on top of her husband, 46, while wearing a black jacket over her yellow silk dress, which she teamed with a pair of black leather boots.

She accessorised with dark chunky sunglasses and styled her hair in a half up half down bun.

Meanwhile, Travis could be seen wearing a shirt with black jeans and a black studded belt which he teamed with a pair of black and white Converse.

In the first picture, the newlyweds could be seen holding hands as they strolled down the street with the sun setting in front of them.

In another snap, it appeared as though Travis had pulled out all the stops to make their stay as romantic as possible as Kourtney showed off a festooned table filled with champagne, roses and some delicious-looking treats.

And in a third picture the TV personality could be seen wearing lace over her head, which seemed to confuse some fans who needed others to explain what she was doing.

Kourtney captioned the post, writing: "Once upon a weekend."

Travis commented below, saying: "I never want to stop making memories with you."

The couple, who are affectionately nicknamed Kravis, dated for less than a year before getting engaged, and only went public with their relationship in January 2021.

The Blink-182 drummer went to every length possible to make his proposal as romantic as possible though.

In photos Kourtney shared on her Instagram, the duo could be seen standing in the middle of a giant heart made of red roses.

The 42 year old took to her Instagram feed to confirm the news at the time, simply captioning the post: “Forever.”

The proposal later featured in the Kardashians' Disney+ reality show, which revealed Travis asked Kourtney's mum, Kris Jenner, for permission to marry her, and also visited the grave of his bride-to-be's father, Robert Kardashian.

Kourtney and Travis's lavish Italian nuptials will feature in the second series of the show, which is due to debut later this year.