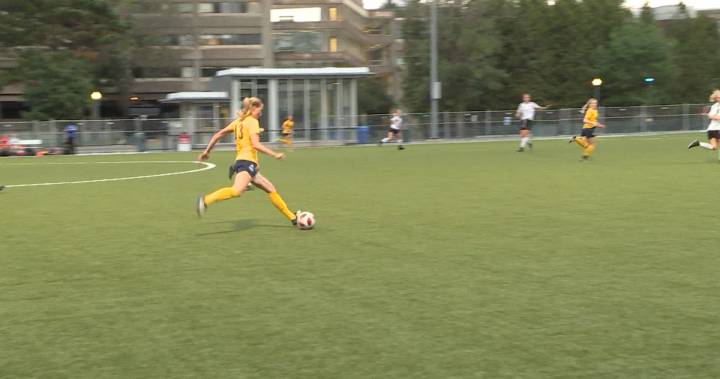 The Kingston Clippers are on the verge of winning a second straight championship in the Ottawa-Carleton Premier Women’s Soccer League.

The Clippers, coached by Marco Giacamello, Dimitri Senis and Bob Machin, moved into a tie for first place in the league standings with the Gloucester Hornets.

Both teams have 31 points but Kingston has a game in hand and a huge lead when it comes to the goal differential tie-breaker.

“Tonight’s win puts us one step towards winning another title,” said Burton, a former Queen’s Gaels star who leads the league with 14 goals. “We’ve had a great season so far.

“We have a talented starting 11 with lots of depth coming off the bench. This is a very talented team with the ability to score.”

One of the talented newcomers on this year’s team is Christie Gray from Vancouver. She’s preparing for her third season with Queen’s in Ontario University Athletics competition.

“Playing this summer with the Clippers has really improved my game,” said Gray.

“This team is so much fun to play with. We have a super deep squad, like Breanna said. We get contributions from every player on the field.

“Our focus is not on the championship. Our focus is on the next game, but if we keep holding our own and playing the way we’re capable of playing, it looks real promising for us.”

Kingston’s next game is on the road. The Clippers will play the Ottawa International Fury on Monday, Aug 5. at Franco Cite Field at 8.30 p.m.