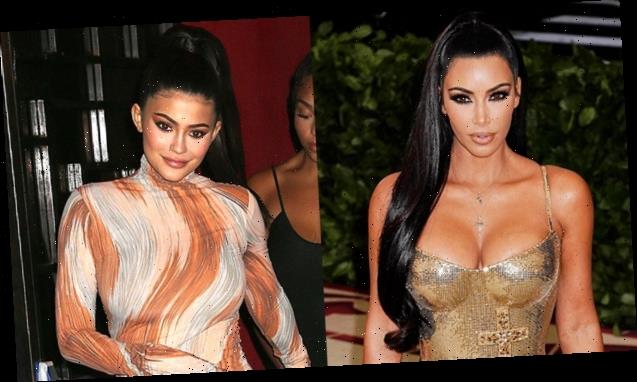 Kim Kardashian took to Instagram to share a new stunning photo of herself posing in a sheer top, jeans, and a high ponytail that looked exactly like the one her little sister Kylie Jenner has worn.

Kim Kardashian, 40, reminded us just how much the KarJenners look alike when she posted her latest Instagram pic. The Keeping Up with the Kardashians star looks a lot like her younger sister Kylie Jenner, 23, in the snapshot, which she posted on Jan. 12. She’s wearing a tan and brown sheer long-sleeved top and jeans and is showing off a half ponytail, which Kylie often wears.

“11:11 💫🤷🏻‍♀️,” she captioned the pic before her followers shared many compliments. “Love it,” one wrote while another called her “so cute.” A third told her she is “looking gorgeous” and others left heart-eyed emojis.

Kim’s stunning photo reminded us of a photo that Kylie posted to her own Instagram back in Oct., which you can see below. In it, she’s showing off a figure-flattering pink sparkly mini dress and has her hair up in a half ponytail just like the one Kim recently had. She also has her nails long and pink and is giving a fierce look to the camera.

Kim and Kylie aren’t the only KarJenner sisters to show off similar looks. The beauties are known for often being mistaken for one another in certain posts. Khloe Kardashian, 36, recently shared a pic to Instagram and many fans took to the comments section to reveal they thought it was her younger sister Kendall Jenner, 25.

The photo had her posing in a mirror while holding her phone up to capture the selfie. Only part of her face was shown but it looked so much like Kendall’s features and after many fans compared her to the model, she responded with excitement.

“this is so funny to me. What a complement! I guess when a phone covers more than half my face I look like her LOL,” she wrote in one response. “no seriously I so appreciate the compliment. I’m going to hold a cell phone in front of half my face more often.”

Kendall and Kylie have also been compared at previous times, including when they promoted their Kendall x Kylie collection from Kylie Cosmetics last year. They showed up in a video together and looked like twins.