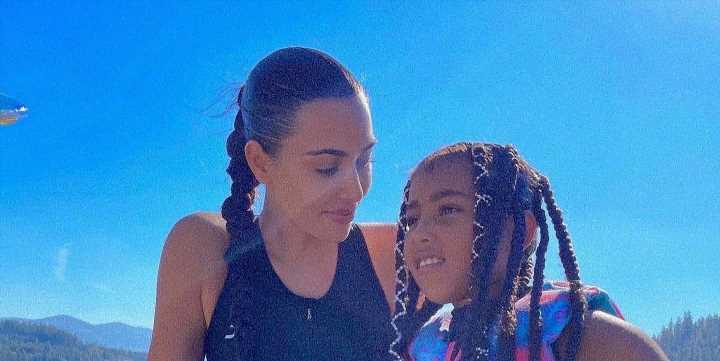 Kim Kardashian and North West have the sweetest of mother-daughter relationships, and we’ve seen them sharing tonnes of cute moments together over the years – as well as literally twinning on numerous occasions.

Joining a long line of celebs and their lookalike children, Kim is often compared to daughters North and Chicago in pictures, with the trio looking adorably similar. Now, more photos have resurfaced showing a young Kim looking pretty much identical to North, and fans are very much obsessed with the whole thing.

Newly resurfaced pics feature a teenage Kim wearing braces with a very ’90s choker and middle parting – and she looks just like North! Entertainment Tonight posted a side-by-side edit of young Kim next to eight-year-old North, who has matching straight hair and a middle parting in the pic. And yep, basically twins.

This isn’t the first time we’ve been offered a glimpse into teenage Kim’s style, with the SKIMS founder previously sharing a very similar set of pics on her own Instagram account, rocking the same 90s choker/middle parting vibe. As expected, the North resemblance is uncanny!

Commenting on Entertainment Tonight‘s post, fans are all very obsessed with how similar these two look, with one follower writing, “Twins 👯‍♂️.” Another added, “North is the spitting image of her mommy 😮,” while a third wrote, “They look the same.”

Prior to the new pics resurfacing, we’ve seen Kim and North looking basically identical on numerous occasions in the past. A recent throwback childhood pic of sisters Kim, Kourtney and Khloé had fans commenting on young Kim’s uncanny resemblance to North, while we’ve also seen the pair sweetly twinning in matching pyjamas.