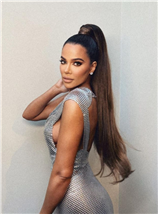 If you've been anywhere near social media over the course of the past several weeks, then you've probably heard about the controversy surrounding a leaked photo of Khloe Kardashian.

The pic – which was taken by Khloe's maternal grandmother, MJ – shows the 36-year-old hanging out poolside, wearing a bikini.

She appears to be happy, and in good shape, and there's really nothing remarkable about the image.

Or at least there wouldn't be, were it not for the fact that it looks so different from the version of Khloe that fans have been seeing over the past few months.

The situation escalated when Khloe and her legal team launched a campaign to have the offending image scrubbed from the internet – a near-impossible feat in 2021, to say nothing of her surprising outrage over this.

Now, Khloe is attempting to explain her over-the-top response, and it seems she's unintentionally sparked an intense debate over the question of honesty on social media.

Take a look and see if you're buying what she's selling.

8.Defending Her Right to Photoshop