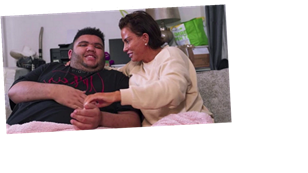 Harvey Price couldn't contain his delight after being told he will be doing his dream job.

The 18 year old was told by mum Katie Price that he has been specially selected to be Network Rail station announcer.

His love of trains was a constant feature on BBC documentary Harvey and Me.

The heartbreaking programme laid bare the teenager and his mum's day-to-day battles and let fans in on their unique relationship.

Harvey, who was born with Septic Optic Dysplasia, a rare disorder that affects brain function, was shown imitating the platform announcers.

Network Rail picked up on his obsession with the railway and offered him the chance to do it for himself with his pal Zach.

Katie, who also shares Junior, 15, and Princess, 13, with ex-husband Peter Andre and Jett and Bunny with Kieran Hayler, told him the good news.

She filmed his reaction for her YouTube channel and said: "You know you went to the station with Zach?

"Lots of people saw you talk about trains. The company, a station phoned mummy up and said would Harvey like to go to a station and do an announcement?

"Harvey would go: 'Can I have your attention please?' Would you like to do that and take Zach with you?"

Katie was warned that her eldest child, who also have Prader-Willi syndrome and is autistic, could be sectioned if his behaviour gets worse.

On the programme, the star speaks to her friend Anna Kennedy, who has two autistic sons.

Anna warns: "If the placement doesn't work for Harvey you don't want it to start effecting his mental health, his wellbeing.

Anna then suggested Harvey could be sectioned under the Mental Health Act if his behaviour gets worse.

"Not that I want to scare you, but if the placement doesn't work the local authority can come in and forcibly take Harvey away if they feel he is a risk to himself and others," she added.

"He could end up in a mental health unit or an assessment and treatment unit.