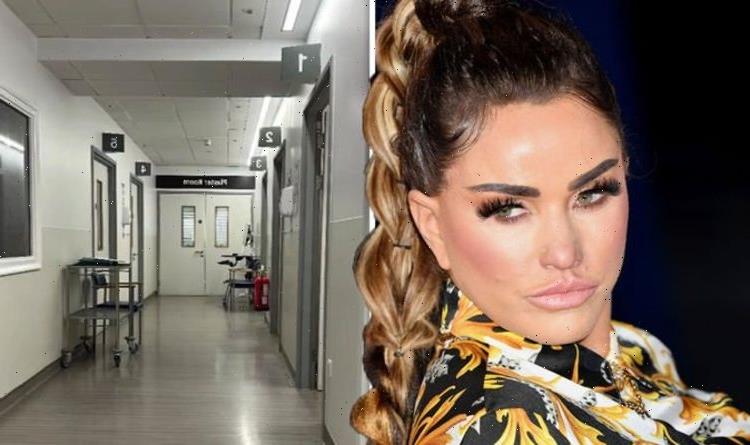 Katie Price on needing a blood transfusion after surgery

Katie Price took to Instagram and shared a photo while in the hospital today. The former I’m A Celebrity… Get Me Out Of Here! contestant posted a message to her fans via her stories.

In the snap, the 43-year-old could be seen at the end of the hospital hall at the Plaster Room, alongside various consulting rooms.

The mum-of-five didn’t confirm the reason behind her visit but instead shared some rap lyrics.

The reality star previously suffered issues with her feet after a horror fall while on holiday last year.

In view of her 2.7 million followers, Katie accompanied her post with Eminem’s 2002 hit single, Without Me.

Part of the lyrics from the rapper’s iconic track read: “Guess who’s back, back again? Shady’s back, tell a friend.”

Katie recently suffered problems with her feet after falling from a 25ft concrete wall during a holiday to Turkey in August 2020.

Following the horrific incident, the reality star struggled to walk and required eight-hour surgery to fuse her broken bones back together.

She previously addressed the impact of her life-changing injury during a candid interview.

She told The Sun: “I’ve got a limp when I walk now as one leg is longer than the other because of all the metal in the foot – I waddle like a duck.

“I will never be the same, I’ve had to accept that, but I’m staying positive. The accident has changed my life and it’s only just sunk in if I’m honest.”

In the same interview, Katie confirmed she was now registered as disabled following the accident in 2020.

The star’s health update comes just hours after Katie reviewed this year’s contestants on ITV’s I’m A Celebrity… Get Me Out Of Here!

The reality star, who famously found love with former husband Peter Andre on the show, reacted to the programme’s opening episode.

The mum-of-five called out some of the contestants for having “even less followers” than her current fiancé Carl.

He then added on the video posted to Katie’s Instagram: “Even me, a nobody, has more followers than some of these people.

“To me, if you’re a celebrity you don’t need to go in and say ‘hi I’m so and so’ because you’re meant to be famous.”

Katie quipped: “It should be called Who Are They? Are You A Celebrity or Aren’t You?”

The TV star later joked she was surprised there is no Instagram “influencer” included in the line-up.

I’m A Celebrity… Get Me Out Of Here! airs tonight on ITV at 9pm.