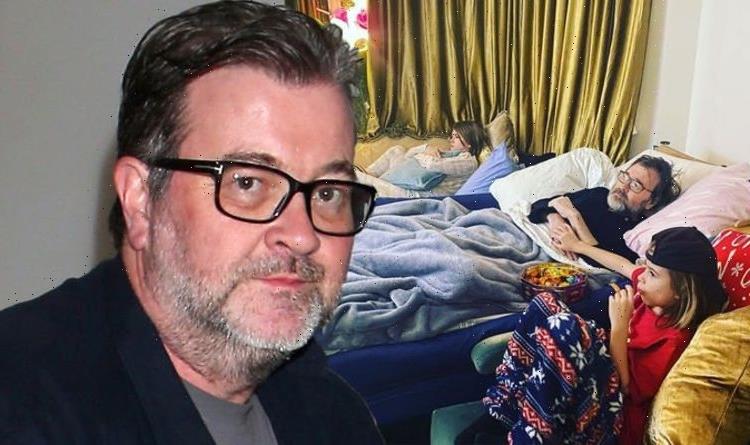 Kate Garraway says she is 'lucky' to have Derek Draper

Derek Draper, 54, was hospitalised with Covid in March last year and was admitted to the intensive care unit, not returning home until April of this year. He has now been seen with wife, Kate Garraway, 54, outside for the first time since before he was rushed to hospital, as he attended a pantomime with his family.

So the last 24 hours has been bumpy.

Derek has had a very difficult 21 months, but was able to smile for the paparazzi pictures as he entered the pantomime.

Although he still looked very weak and frail from the impacts of the virus, the former political adviser seemed to be in high spirits.

Derek was home for Christmas this year, which Kate called “the greatest gift” she could have ever received.

She said: “Last Christmas Eve, we did have a lot of promise and a lot of hope but Derek was in hospital.

“We had no idea whether he was going to live or die, praying that it was going in the right direction.”

Derek, Kate, and their two children were going to watch Cinderella at the Richmond Theatre.

Derek is still being cared for at home after Covid severely damaged his internal organs in March 2020, leading him to be hospitalised for over a year.

Although Kate has recently been overjoyed by the progress Derek has been making in his health battle, she admitted last night that his condition had taken a turn for the worse in the “last 24 hours”.

The mum-of-two took to Instagram to detail the worrying situation in view of her one million followers.

She shared a picture of Derek resting in front of the TV with their two children, Darcey and Billy.

Kate penned: “So the last 24 hours has been bumpy – a scare that meant Derek might have had to go back into hospital ( thankfully sorted by a visit from nurse/carer) , he has also had one of his ultra fatigue days so has been too weak to do much other than sleep.

“I burnt the parsnips ( Darceys favourite ) & got the “wrong” Lego for Billy.”

Kate added that she was feeling very “grateful” that everything had turned out well this Christmas, despite the difficult start.

She continued: “But now snuggled up around Dad’s bed watching #nativity everything feels suddenly perfect. Feel so grateful to have the chance to be together.

“Sending love & hoping you have found some joy today whatever your circumstances – #merrychristmas all!”

The star previously told her GMB co-host Richard Bacon about the incredible moment she and her family realised the former lobbyist “could understand” her in recent weeks.

Last week, Kate said that many of her family members were not celebrating the Christmas holidays with them this year due to Derek’s condition.

With the rapid rise in Omicron cases across the nation, the GMB star said she wasn’t going to take the risk of putting her husband’s health in jeopardy when he’s still recuperating.

In November, it was announced that ITV had commissioned a follow-up to Kate’s NTA award-winning doc, Finding Derek, with the sequel, Caring For Derek, expected to air in early 2022.

The forthcoming documentary will highlight Derek’s journey after leaving the hospital as Kate navigates through the difficult circumstances while juggling her ITV job and raising their two children.