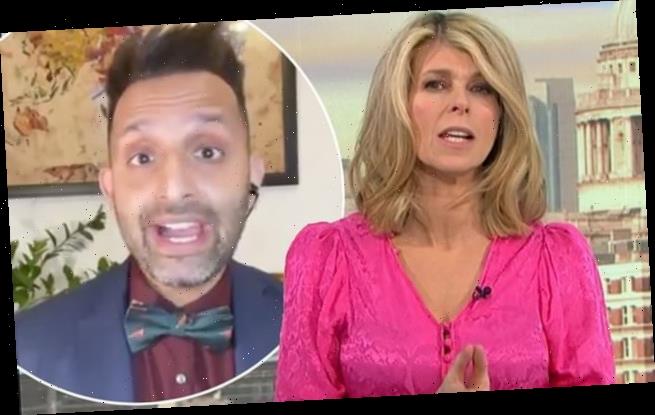 Kate Garraway revealed on Good Morning Britain on Friday that she has been targeted by cruel scammers, who are sending her messages pretending to be from the NHS.

The presenter, 53, questioned Dr Amir Khan if it was really the NHS sending messages warning people about Covid variants discovered in their area.

Kate’s husband Derek Draper, 53, remains in intensive care nearly a year after he was first admitted to hospital with coronavirus. 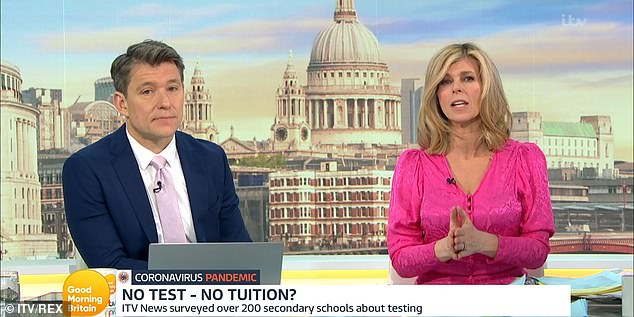 Targeted: Kate Garraway revealed on Good Morning Britain on Friday that she has been targeted by cruel scammers, who are sending her messages pretending to be from the NHS

Kate asked Dr Amir: ‘They’ve identified another new variant, haven’t they? I don’t think it’s alarming at the moment but they’re looking at it more.

‘I have and I just wanted to check with you if this is likely to be real or not, I’ve noticed increasingly more on local WhatsApp groups and indeed on the Internet generally.’

Kate continued: ‘I am getting messages that look like they’re from the NHS, saying things like: “The South African variant has been discovered in your area, take extra care”. 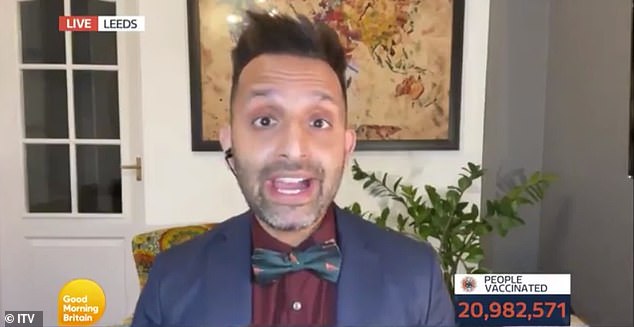 Advice: The presenter, 53, questioned Dr Amir Khan if it was really the NHS sending messages warning people about Covid variants discovered in their area 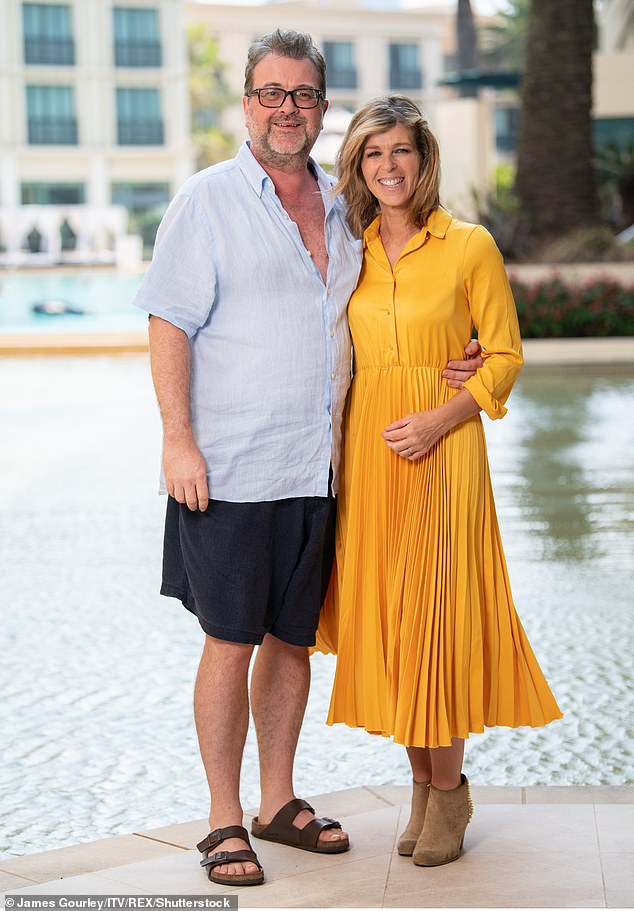 Critically-ill: Kate’s husband Derek Draper, 53, remains in intensive care nearly a year after he was first admitted to hospital with coronavirus (pictured 2019) 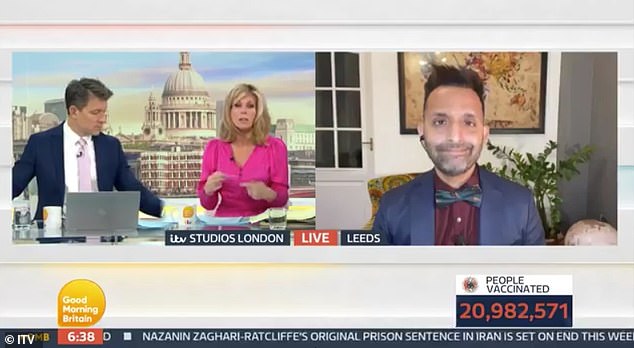 Are they real? Kate said: ‘I am getting messages that look like they’re from the NHS, saying things like: “The South African variant has been discovered in your area, take extra care”‘

‘Is it likely that the NHS is doing that? It looks like it is, but there’s also something about it that doesn’t look official as well.

‘Have you noticed this happening? Can you confirm if this is real or not? Or is it part of the spamming that’s going on?’.

Dr Amir replied: ‘I’ll be honest with you, Kate. I haven’t heard about this and I work closely with the NHS and in public health campaigns. 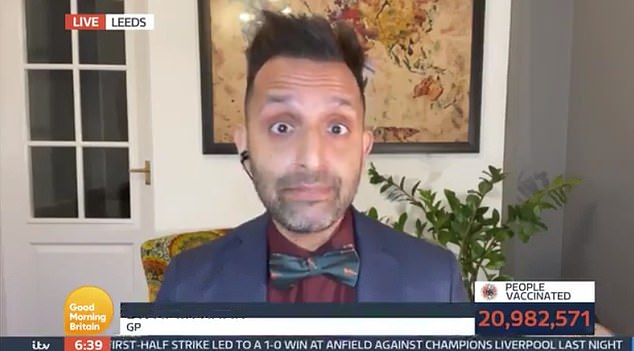 Unsure: Dr Amir replied: ‘I’ll be honest with you, Kate. I haven’t heard about this and I work closely with the NHS and in public health campaigns’ 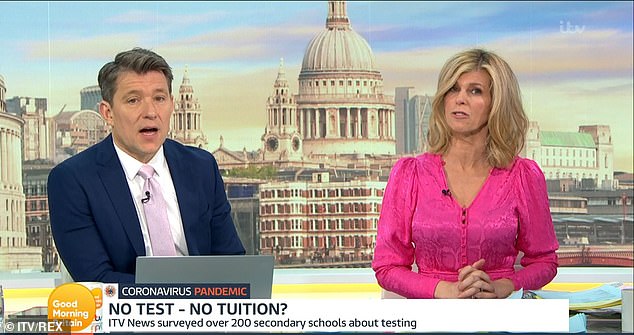 She added: ‘Is it likely that the NHS is doing that? It looks like it is, but there’s also something about it that doesn’t look official as well’

‘I’ve not been made aware of such a messaging services so I would stay be mindful of unsolicited messages like that.

‘But I think that while everybody is adhering to the rules and maintaining that social distancing, that will help… But I am not aware of such messages.’

Annoyed, Kate ranted: ‘You wonder whether it’s spreading an unnecessary fear, which doesn’t help in the long run,’ while her co-host Ben Shephard, 46, added: ‘There certainly seems to have been a surge in those messages.’

Last week, the Smooth presenter shared her heartache about not being able to visit her husband due to coronavirus restrictions.

She said to her co-host Ben: ‘Well, I haven’t been able to see him, Ben. I haven’t seen him since Christmas, which of course means he’s back into a situation where he’s looking at strangers in masks… 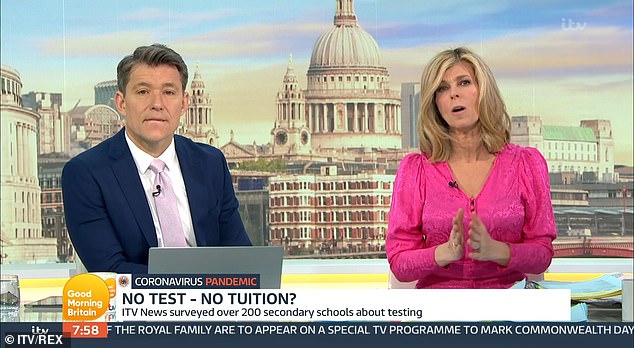 ‘It doesn’t help in the long run’: When Dr Amir said he had not been aware of such a messaging service, Kate said: ‘You wonder whether it’s spreading an unnecessary fear’

‘And I think that’s the situation for everybody, they’ve got somebody in the hospital at the moment, it’s not unique. It’s tough…

‘It’s also the same for people in care homes. And when you’re someone like him who is dealing with a consciousness problem and trying to emerge, I can’t help but fear it’s not helpful.’

While Derek no longer has coronavirus, the disease has left him suffering from multiple health conditions including diabetes and holes in his heart and lungs.

During one of her darkest moments Kate was told her husband may ‘never come out of a coma’ amid his ongoing battle.

Derek has regained minimal consciousness from his medically induced coma and while he has not been speaking, he heartbreakingly mouthed the word ‘pain’ in October last year. 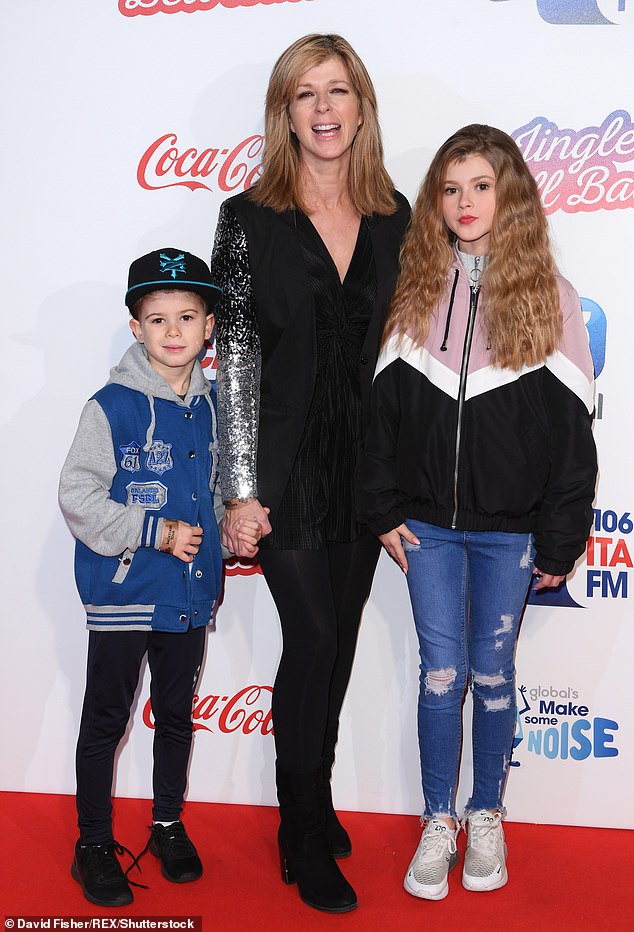 Family: Reflecting on her last hospital visit with their two children Darcey, 14 and William, 11 in December, Kate said the reunion was ‘heightened with emotion but still fantastic’

In September, Derek, passed the grim milestone of becoming the longest patient battling coronavirus in hospital in the UK, with doctors telling Kate that Derek’s infection was the ‘highest they had seen in a patient who had lived’.

Reflecting on her last hospital visit with their two children Darcey, 14 and William, 11 in December, Kate admitted the family reunion was ‘heightened with emotion’ because they saw how Derek had been ravaged by the virus.

‘It was very heightened with emotion, because he’s very changed,’ she told viewers.

‘So all the routines that we’d normally do, it was one of those moments that it was so wonderful but also it amplified how sad everything was.

‘And how different it is. But it was still fantastic, and we’re very grateful to have had that opportunity.’

A timeline of Derek’s coronavirus battle

Kate revealed she and Prince Charles had got ‘relatively close’ at the Prince’s Trust Awards on March 11 – Charles was diagnosed with coronavirus in mid-March.

‘He said he had a headache, numbness in his right hand, and was struggling to breathe,

‘I rang Dr Hilary (Jones) and tried to get through, he talked to Derek. He said put me back on, I think you need to call an ambulance’

Derek, 52, was taken into hospital on March 30 and remained in an unresponsive condition.

Kate and her children isolated at home after she displayed ‘mild symptoms’.

‘I’m afraid he is still in a deeply critical condition, but he is still here, which means there is hope.’

Kate said: ‘The journey for me and my family seems to be far from over as every day my heart sinks as I learn new and devastating ways this virus has more battles for Derek to fight.

That month, Kate and her family took part in the final clap for carers

She said: ‘I’ll never give up on that because Derek’s the love of my life but at the same time I have absolute uncertainty’

On June 5, Kate revealed Derek is now free from coronavirus but continues to fight against the damage inflicted on his body

On July 5, Kate revealed Derek has woken from his coma but he remains in a serious yet critical condition.

On July 8, she announced she would be returning to GMB, after being urged by doctors to ‘get on with life’ during Derek’s recovery.

She added that Derek had ‘opened his eyes’ after waking from his coma, but has been told his recovery could take years.

On July 13, Kate returned to GMB for the first time since Derek was hospitalised.

On August 14, Kate reassured GMB viewers that Derek was ‘still with us,’ but it was ‘a waiting game.’

On August 19, Kate revealed she celebrated Derek’s birthday with their two children, and described the day as ‘challenging’ for her family.

At the end of September, Derek reportedly becomes the longest surviving patient with coronavirus after spending 184 days in and out of intensive care.

Kate reveals Derek has lost eight stone during his battle.

The presenter announces she is returning to her Smooth Radio show so Derek can hear her voice.

On October 30 Kate reveals that Derek has spoken for the first time in seven months, saying the word ‘pain’ to his wife, who watched on ‘in tears’ over FaceTime.

Kate says a day later that her husband no longer needs a ventilator to breathe.

Kate reveals her family car has been stolen in latest ‘body blow’ to her family life, as kind-hearted fans offer their cars to help.

She says she feels ‘physically sick’ at the prospect of facing her first Christmas without Derek.

The GMB star tells viewers it is her dream to visit Derek on Christmas Day.

She also reveals she missed two weeks on GMB after her children were exposed to the virus, but thankfully she and the kids tested negative.

On December 17, Kate has an emotional conversation live on GMB with two nurses who treated Derek when he was first admitted to Whittington Hospital in North London.

On New Year’s Eve she reflects on a ‘calamitous’ Christmas without Derek, as her house was flooded and she struggled to get a food delivery slot until her pal Emma Willis stepped in to help.

Kate reveals she and her children got to visit Derek in hospital over the Christmas period, and it was the first time her family had seen him since he was hospitalised.

She also says she’s banned from seeing him due to new restrictions introduced during the government’s third lockdown.