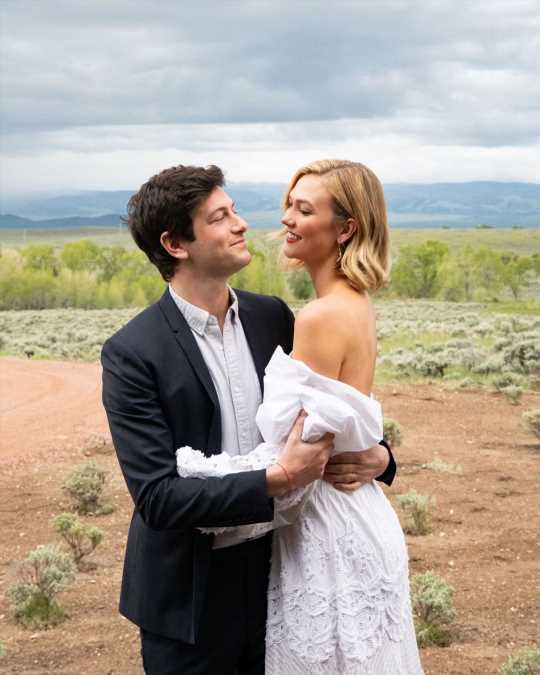 So nice, they did it twice (or more)!

Eight months after tying the knot, the model and her husband, whom she wed in October 2018 in upstate New York, had a party in Wyoming as seen in photos shared on Instagram on June 23.

“May your marriage be as intense and long lasting as my hangover from this weekend,” Kloss’ close friend Derek Blasberg wrote along with three photos of the couple, including one that showed them being lifted on chairs during a traditional horah dance.

Also in attendance were Katy Perry and Orlando Bloom.

A rep for Kloss previously told PEOPLE that they would host a larger celebration for friends and loved ones in the spring.

The pair have been dating since 2012; they announced their engagement in July 2018.

Just when you thought they were done celebrating, they did it again! Jonas and Chopra kicked things off with an epic weekend-long celebration in India, saying “I do” in a Western ceremony officiated by the singer’s father following days of pre-wedding parties. They again made things official in a Hindu ceremony, honoring Chopra’s roots, and celebrated again two days later with a reception in Delhi.

But as Chopra wrote on Instagram, “the party don’t stop,” and just before Christmas, the newlyweds were back in India for yet another pair of receptions.

Following their impromptu New Year’s Eve wedding, live on TV on Dec. 31, 2017 and officiated by Steve Harvey, the couple exchanged vows again in October 2018 in her family’s homeland of Greece.

“I’ve been planning this for maybe a month but really been planning this for a long time in my heart because I always wanted to return to Greece and do our wedding here,” she shared on Instagram prior to the second nuptials. “Greece means so much to us and our village and our roots and i’m so beyond thankful to all of our friends who put this together.”

“Honestly I feel like the luckiest girl in the world,” she continued. “I have the best husband, I have the best family, nothing is without its problems and nothing’s perfect but I am so blessed and so so happy today that we get to do this amazing wedding in this beautiful village that I want to move to although I think Keven may divorce me and that would kind of suck.”

The couple — who are parents to toddler son Caiden Zane — exchanged vows in front of 100 of their closest friends and family.

But they’d actually been married for months: they had a civil ceremony at their home that January, with their son Caiden present.

Part of the reason for waiting for the big celebration? So ring bearer Caiden could walk down the aisle!

Turns out the Dancing with the Stars pros had two wedding ceremonies! While celebrating their first anniversary as a married couple in July 2018, Chmerkovskiy revealed that before the couple had their big fairytale wedding, they actually tied the knot at a small city hall ceremony.

“This was one of the most exciting days of my life!” Chmerkovskiy wrote alongside two videos documenting the intimate ceremony. “Everything felt very festive, I couldn’t take my eyes off my future wife the whole ride to the City Hall and it was is if New York City herself was marrying us.”

The tattoo artist and makeup mogul may have already tied the knot to Prayers vocalist Leafar Seyer back in February 2018, when she announced the news by sharing a photo of their matching wedding bands and matching black manicures. But as it turns out, the couple celebrated their nuptials again a few months later, in June.

Seyer shared the first look at Von D on their (second) wedding day, posting a photo of the bride. Ditching the traditional wedding white, the Kat Von D Beauty founder wears a red get-up with a high collar, complete with matching veil and headpiece.

“In a couple hours I’ll be walking down the aisle with the love of my life @thekatvond ❤ EN VIDA Y EN MUERTE,” he captioned the shot.

Almost two months after their February 2009 ceremony — which took 10 days to plan — Brady and Bündchen planned a more elaborate wedding, which included their extended family, in Costa Rica. “The thing about it is, the day’s for you,” the athlete told GQ. “It’s nothing personal against anybody, but it’s not about them. It’s about what you and your wife need for that day.”

Mancuso, an American World Cup alpine ski racer and Olympic gold medalist, wed her husband on the beach at the Tavarua Island Resort in Fiji in June 2017 — a few months after first tying the knot in her hometown of Squaw Valley, California, back in December.

The duo — who originally got married in February 2017 in an intimate courthouse ceremony — held a second wedding celebration in June. “You only get married twice, once,” Kirke — the sister of Girls star Jemima Kirke — captioned a shot of a dapper Badgley. The newlyweds’ second fête proved to be more star-studded than their first, with guests Mariska Hargitay, Zac Posen and Debra Messing in attendance.

Nearly one month after their 2014 wedding in Venice, the newlyweds celebrated again, this time with a party on Amal’s home turf. The October bash was hosted by the bride’s parents, Baria and Ramzi Alamuddin, at the historic Danesfield House Hotel and Spa 40 miles outside London in Buckinghamshire. “It was a very sympathique soiree,” a guest told PEOPLE. “Very polished and a little low-key than you thought it might be.” Added another source: “There were no other famous people. It was 90 percent her family. It was a lovely family celebration.”

While some celebs go all out for birthdays, the Phelps family pull out the stops for weddings. After secretly tying the knot in a low-key June 2016 ceremony, the Olympian and former Miss California took on a more glam approach a few months later in October — with son Boomer serving as ring bearer. But that wasn’t the end of celebrations for the pair! The newlyweds welcomed 2017 with a New Year’s Eve wedding ceremony.

Before tying the knot on a season 5 episode of The Hills (which also saw ex BFFs Montag and Lauren Conrad briefly reunite), the reality TV stars eloped in Mexico in 2008. “We had a beautiful ceremony here at One & Only Palmilla officiated by a minister and photographed by the hotel photographer,” he told the Associated Press in a statement at the time. “We’ve never been happier.”

The private couple kept things, well, private when it came to getting married. The pair headed to the south of France to make things official at a town hall in 2013 before hosting a second wedding for their friends.

The British singer quietly married his legal consultant fiancée — and the granddaughter of the Duke of Wellington — Wellesley in September 2014 at a London registry office. They then celebrated with family and friends on the Spanish island of Majorca later that month, a source confirmed to PEOPLE.