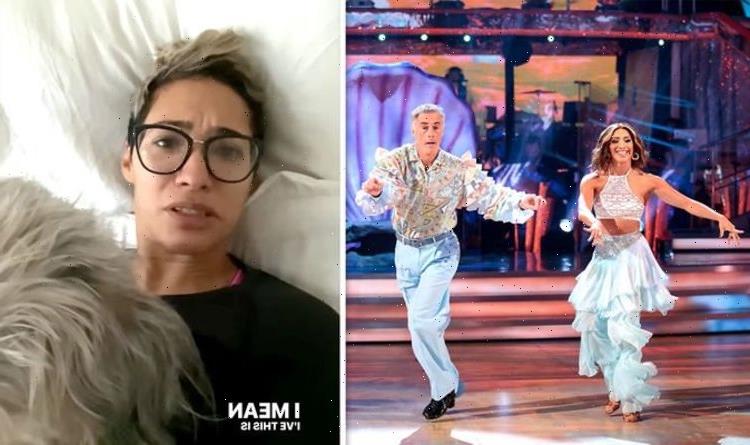 Karen Hauer, who competed in Strictly Come Dancing this year, recently injured herself during rehearsals. The Venezuelan-American dancer explained that she would have to take “a break” from dancing and from the show in order to recover properly.

The star recently took part in Strictly Come Dancing this year alongside Sense and Sensibility actor Greg Wise, who is married to his former co-star Emma Thompson.

Taking to social media, she shared a health update with her 282,000 followers.

Lying in bed with her dogs, she began: “So a little update about my knee.

“I saw the knee specialist yesterday and he was extremely thorough.

“It was amazing to see the explanation behind all the MRIs and all the images and everything that’s going on with my knee.

“So currently I have two things wrong with my knee,” the star explained, “There’s a little bit of a tear in my meniscus and there’s also the little cartilage flap behind my knee.”

She seemed hopeful, however, adding: “Their very minor, so instead of an op, I got a knee injection so that’s good news.

“I mean I am terrified of injections. I hate needles, so I’m glad that it happened already.

“I pretty much bit off Jordan’s jacket, bless him, but at least I am not going into surgery which is good for now,” she joked in reference to her boyfriend Jordan Jones Williams, who is a fitness professional from Australia.

“I feel like I’m in Footloose the movie and I need to rest for a couple of days.”

‘Disgusted’ Brian May rages at the Government with savage video [INSIGHT]

The dancer, who joined Strictly Come Dancing 2012, will therefore not be able to perform in the show again this year.

She continued: “I start rehab on Monday so… Strengthening, conditioning, which is something I am really looking forward to.

“But it’ll be for my own good right?” she asked, turning the attention to her dog, who proceeded to ignore her question.

“He doesn’t care,” she joked, as her dog barked at the camera.

Karen went on to admit that she had been having “trouble sleeping” as well as “stress and anxiety” since her injury.

However, she is now on the mend and credited her new weighted blanket for giving her a good night’s sleep, comparing it to “a massive hug”.

This year, Karen only made it to week four of Strictly Come Dancing with her celebrity partner Greg, whose spirited Samba to the Macarena was not enough to save them from the dreaded dance-off.

Strictly Come Dancing continues on Saturday at 7:05pm on BBC One.