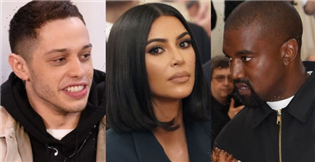 Over Halloween weekend (Halloweekend, if you will), Kim Kardashian and Pete Davidson were seen holding hands.

Despite a lack of official confirmation that they’re in a serious relationship, the world is excitedly celebrating a “new couple alert.”

Kim has been humiliated for years by her poorly behaved ex, but right now, Kanye is the one unhappy.

He is reportedly fuming over the PDA and feels all but cuckolded by it going down before the divorce is finalized.

An inside source spoke to HollywoodLife about how Kanye West feel’s about his ex’s handholding escapades.

“Kanye was really put off by Kim holding hands with Pete,” the insider reported.

“And,” the source emphasized, “he did not like it at all.”

“He asked Kim to ‘please refrain’ from showing public display of affection,” the insider shared.

Apparently this isn’t just with Pete, but “with anyone.”

Kanye apparently wants Kim to appear totally chaste in public “until their divorced is finalized.”

“He told her that it doesn’t look good for their family,” the source explained.

“And,” the insider shared, Kanye allegedly told Kim that “it doesn’t look good for her.”

According to the source, he told her that it doesn’t look good to the public “or in the ‘eyes of God.’”

It is neither surprising nor new to hear that Kanye is attempting to control Kim.

After all, he did it during their marriage, so why stop now?

We have all previously heard him try to impose his personal religious views upon her as part of this. Again, no change detected.

According to the report, Kanye is said to have reached out to his former momager-in-law.

He apparently spoke to Kris Jenner in an effort to learn more about Kim’s possible romance, as if that were conceivably his business.

However, the insider shared that Kris “wasn’t giving up anything” despite his attempt to pry.

Kris wasn’t just thinking about this not being Ye’s business, but also more practical worries for her daughter.

“Kris’s biggest concern is that Kanye will try to use this against her in the divorce proceedings,” the source shared.

“But the truth is that Kanye is no longer considered part of the Kardashian family,” the insider added.

“And,” the source revealed, “it drives him crazy how quick they were to dismiss him.”

He probably saw how Scott Disick has maintained his quasi-Kardashian status despite years of separation from Kourtney.

But there are two major differences between Scott and Kanye.

The first is that Scott has been part of the family for longer, and not just in the reality TV sense.

Let’s face it — Mason is several years older than North.

Scott gave Kris her first grandchild, and she will never forget that.

The second key distinction is that Scott treats the Kardashians like his own family.

He has a sibling bond with many of them, especially with Khloe (even if it’s a kind of weird bond at times).

In contrast, Kanye has spent years alienating the Kardashian clan, while they put up with him only for Kim’s sake.

At least, that is the public perception based upon ample displays of behavior on his part and numerous reports.

There is a huge difference between becoming one of the family and being tolerated for the sake of your wife and children.

Besides, even if they loved Kanye to pieces, Kris isn’t going to choose him over her actual daughter and her possibly comedian hottie rebound.

We do have to consider another angle to this: that Pete has publicly roasted Kanye in the past.

Pete sort of became SNL‘s unofficial mental illness correspondent several years ago, due to his own battles with mental health issues.

He was a perfect fit to roast Ye, who in turn seems like he might resent it to this day — especially if Pete is also, potentially, boning his ex.