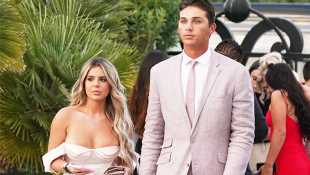 Is Brielle Biermann off the market? The ‘Don’t Be Tardy’ attended Jake Paul’s wedding over the weekend with some hot arm candy. Her date has since been identified as Justin Hooper, and, he’s an athlete!

Justin Hooper is the extremely tall, lucky man who escorted Brielle Biermann, 22, to Jake Paul and Tana Mongeau‘s Las Vegas nuptials on July 28. The two were photographed (as seen below) heading to the Sunday ceremony, and fans immediately pounced with questions as to who the Bravo star’s date was. Now that he’s been identified, here’s five fast facts about the handsome brunette.

2. He attended UCLA, where he was a student athlete on the baseball team. — Justin was the team’s pitcher, and according to his player profile, he logged a 2-2 record, 5.73 ERA, and 61 strikeouts in 55.0 innings pitched during his UCLA career. In 2018, he did not play due to injury. Justin’s also pitched at the iconic Wrigley Field in Chicago.

3. Justin plays pro baseball. — He was drafted by the Kansas City Royals in the 14th round of the 2019 draft.

4. He recently graduated from UCLA. — Justin studied political science, strategy and negotiation, according to his LinkedIn profile.

5. Justin may not be on social media. — There appear to be no Facebook, Twitter or Instagram profiles linked to him. Brielle shared a photo with Justin from the wedding on Instagram, but did not tag him. The reality star has not yet addressed her wedding date publicly. However, her mother, Kim Zolciak did leave a few heart-eyes emojis in the comments.