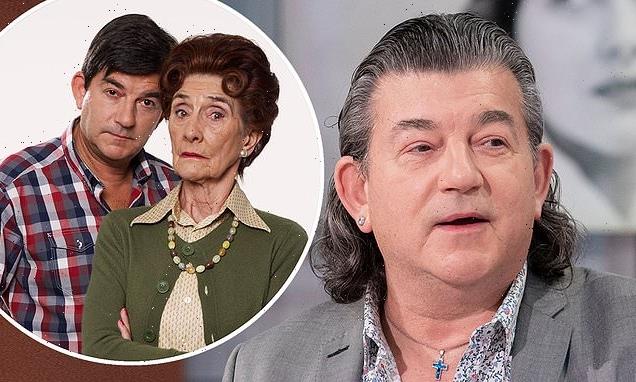 ‘She believed in a higher power’: June Brown’s onscreen son John Altman discusses her spiritual beliefs – after the late EastEnders actress insisted she had no fear of dying

The veteran soap star passed away aged 95 on Sunday and tributes have been flying in for the national treasure, who portrayed Dot Cotton on-and-off between 1985 and 2020.

John, 70, played Dot’s villainous son on a semi-regular basis from 1985 until his onscreen death in February 2015 – and honoured his ‘second mother’ on Tuesday’s Good Morning Britain. 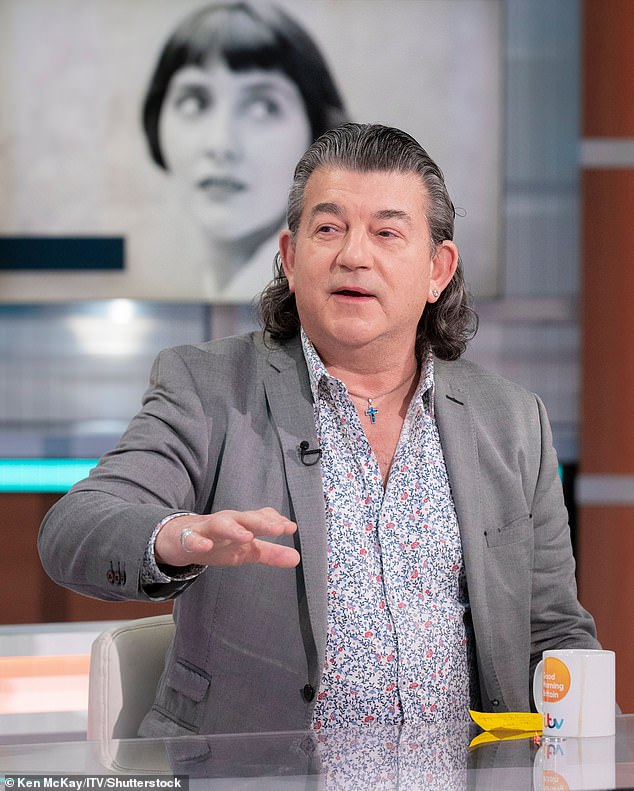 ‘She definitely believed in a higher power’: June Brown’s onscreen son John Altman discussed her spiritual beliefs on Good Morning Britain on Tuesday – after the EastEnders actress insisted she had no fear of dying

He told hosts Richard Madeley and Kate Garraway: ‘She’s so kind. She used to say healing prayers; she was quite spiritual. She definitely believed in a higher power.’

June insisted to The Mirror three years ago she did not worrying about dying because of her belief in an afterlife and immersion in the Christian faith.

‘What’s the point of worrying? I could go to sleep tonight and not be here tomorrow. “Oh dear, June’s gone,” they’d say,’ she said. 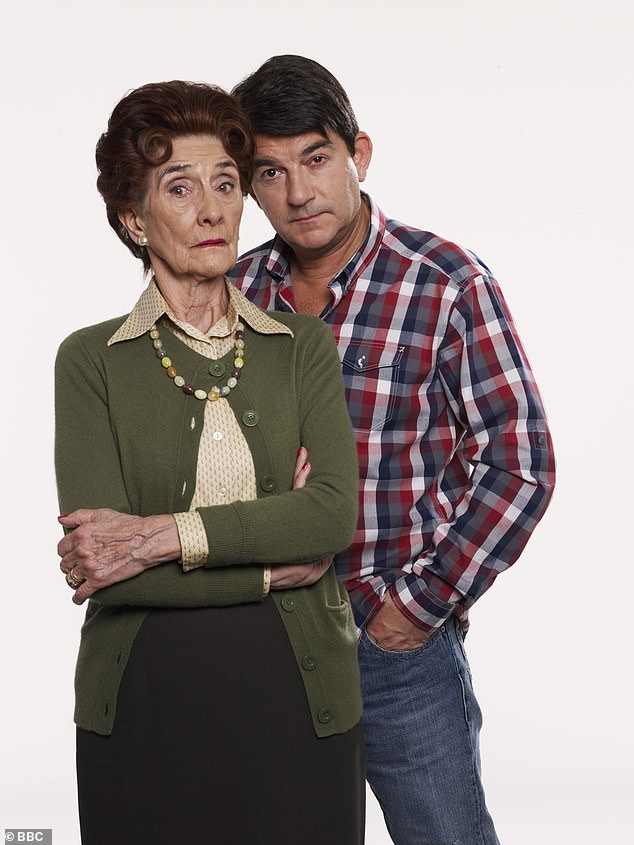 Close: John, 70, played Dot Cotton’s villainous son on a semi-regular basis from 1985 until his onscreen death in February 2015 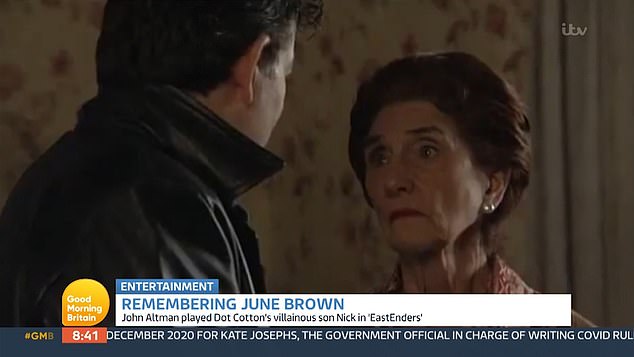 RIP: The veteran soap star passed away aged 95 on Sunday and tributes have been flying in for the national treasure

Meanwhile, John revealed the pair would run lines in her dressing room while ‘having coffee and a few ciggies’, with June a ‘real stickler’ for the script being accurate.

‘[They were] treasured moments for me in my career, it was such a joy to work with her. She was older than me so she was more experienced – she’d guide me sometimes, say, “Slow down a bit on that, dear.”’

John went on to tell how he’d last seen June a month before her death: ‘She was tired. She’d slowed right down. I’d like to say, so much thanks and god bless her family who’ve been fantastic, rallying round her – they’ve taken great care of her. 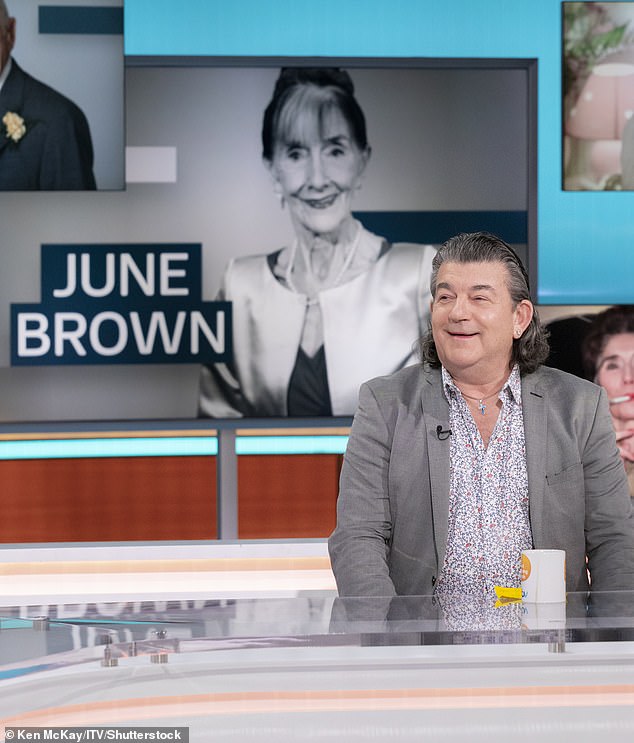 Tribute: John told hosts Richard Madeley and Kate Garraway: ‘She’s so kind. She used to say healing prayers; she was quite spiritual. She definitely believed in a higher power’

‘She didn’t have to go into a home or anything. She spent her last days in her lovely home in the Surrey Hills.’

The actor also heaped praise onto the actress’ generosity, recalling how she could ‘never say no’ to supporting charities.

‘I used to tell her off – “June, you can’t do any more charities”. She said, “Oh dear, I have to”. She supported the donkeys, among many others, Children with Cancer, The Taverners – she just couldn’t say no,’ he said. 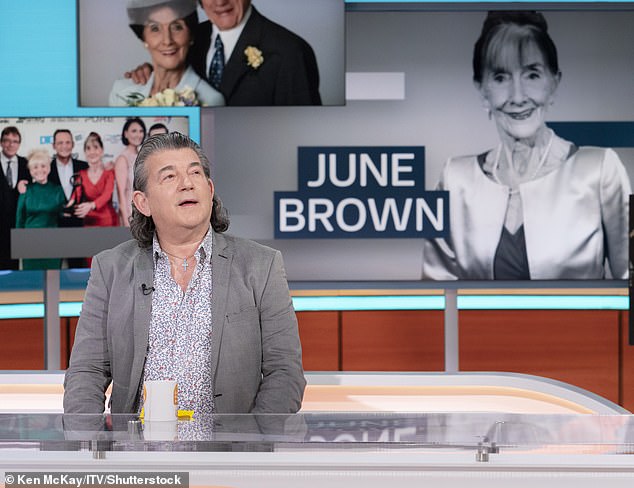 Fond memories: Meanwhile, John revealed the pair would run lines in her dressing room while ‘having coffee and a few ciggies’, with June a ‘real stickler’ for the script being accurate

Richard and Kate asked John what he would miss the most about June, to which he provided a heartwarming answer: ‘She was a dear friend. Someone I could confide in, and probably my second mother, really. My real mother said she looked more like my mother than she did!’

For decades Brown was one of the most famous faces on British TV, playing the devout Christian famed on Albert Square for her chain smoking, gossiping and mothering of those in need.

She forgave and forgave son Nick for his crimes until she gave up on him and he died after consuming a bad batch of heroin bought for him by his very own mother.

Her loving relationship with Jim Branning, played by John Bardon, would captivate millions, leaving fans in tears as she said goodbye to him following a stroke. 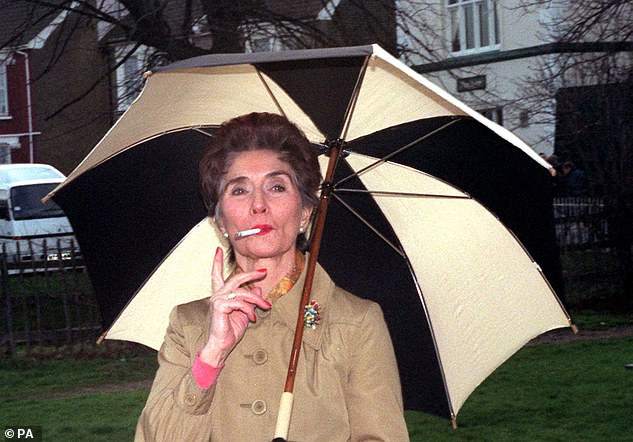 Sad: John added: ‘She was a dear friend. Someone I could confide in, and probably my second mother, really’ (pictured in 1997)

Brown’s family revealed she died peacefully on Sunday while the BBC urged fans to raise a glass of sweet sherry in her memory. The star still loved a tipple and a cigarette well into her 90s.

An EastEnders spokesman said: ‘We are deeply saddened to announce that our beloved June Brown, OBE, MBE, sadly passed away last night.

‘There are not enough words to describe how much June was loved and adored by everyone at EastEnders, her loving warmth, wit and great humour will never be forgotten. 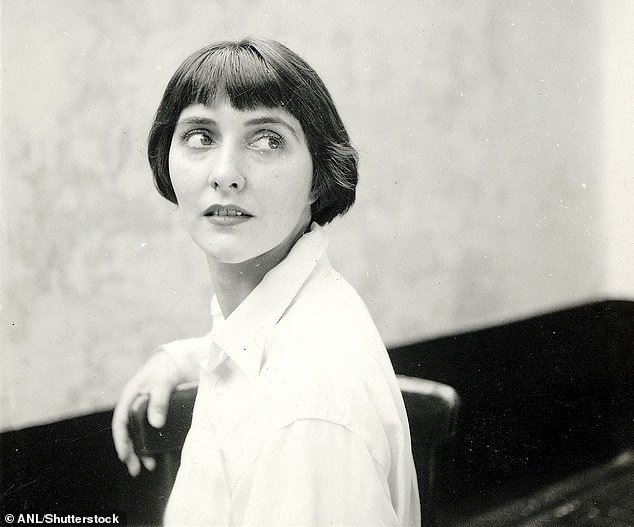 Stunning: An EastEnders spokesman said: ‘We are deeply saddened to announce that our beloved June Brown, OBE, MBE, sadly passed away last night’ (pictured in her youth)

‘June created one of the most iconic characters in Dot Cotton, not just in soap but in British television, and having appeared in 2,884 episodes, June’s remarkable performances created some of EastEnders’ finest moments.

‘We send all our love and deepest sympathies to June’s family and friends. A very bright light has gone out at EastEnders today but we shall all be raising a sweet sherry in June’s memory. Rest in peace, our dearest June. You will never be forgotten.’

A statement from her family said: ‘We are deeply saddened to announce our beloved mother, June, passed away very peacefully at her home in Surrey on Sunday evening, with her family by her side.

‘We would kindly ask that our privacy is respected at this very difficult time.’ 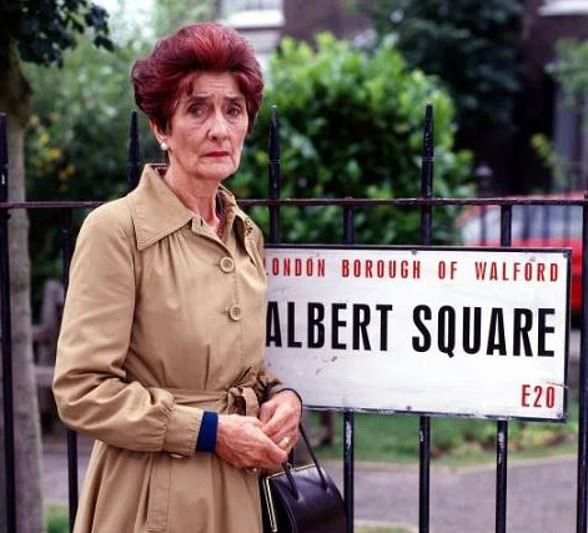 History: Dot has been involved in a number of dramatic storylines throughout her years in Walford

Dot’s debut – 1985: Dot Cotton made her debut in EastEnders in July of that year as the mother of notorious criminal Nick Cotton and the best friend of Ethel Skinner. Despite Nick stealing from his mother and attempting to poison her, Dot believes he can be redeemed.

Dot temporarily leaves Albert Square – 1993: Nick’s girlfriend Zoe Newton arrives in Walford and introduces Dot to their nine-year-old son, Ashley Cotton.  Dot becomes close with her grandson and Zoe asks her to move to Gravesend with them.

Nick is thrown behind bars when Dot returns – 1997: Dot moves back to the square after Nigel Bates tracks her down. Nick has been arrested for drug possession and she is shocked when he returns unexpectedly. He begins stealing from her again and falsely claims to have AIDS. Dot discovers the lie and reports him to the police.

Dot helps her friend Ethel to die – 2000: Ethel begs Dot to help end her life after she comes terminally ill. Torn between her deeply held Christian beliefs against euthanasia and her friend’s wishes, Dot ultimately helps Ethel to die with pills, but later thinks she should be jailed for murder. Feeling she should be punished, Dot ends up in court for shoplifting. She is jailed for 14 days for contempt of court following an outburst in the courtroom.

Dot ties the knot for a second time – 2002: Dot starts a relationship with neighbour Jim Branning. When he proposes, she is overwhelmed and leaves Walford. Jim perseveres and proposes to Dot a second time when they visit the London Eye on Christmas Eve. They decide to have a platonic marital relationship.

Dot appears in EastEnders’ first ever single-handed episode – 2008: In an emotional episode, Dot recorded a message for her husband Jim after he suffered a stroke. The episode featured only her character and June was praised by viewers for her emotional performance.

Dot watches on as Nick dies – 2015: After years of forgiving him for his crimes, Dot accepts Nick’s inability to change. After he asks her to buy him heroin, she agrees and gives it to him. Nick confesses he murdered Reg Cox as he lays dying and Dot decides not to call an ambulance to save him.

Sonia steals from Dot – 2019: Sonia resorts to stealing from her step-grandmother after a blackmail threat from Martin’s hit-and-run victim. She covers her tracks by claiming hackers are to blame after trying to steal thousands from Dot’s bank account.