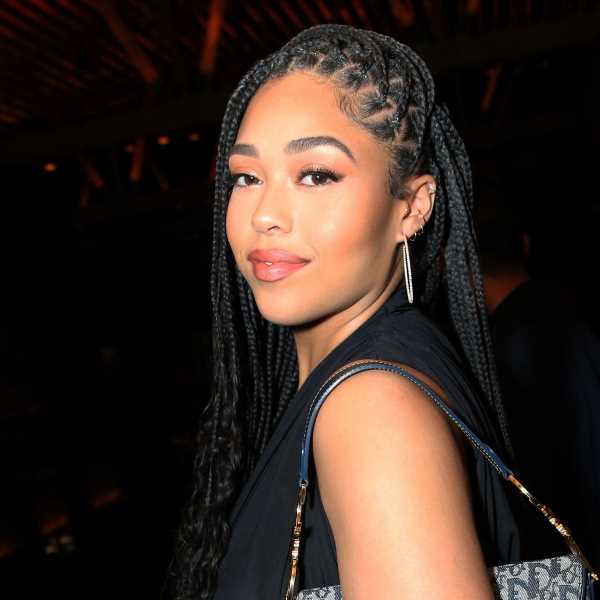 It’s been a rocky year for Jordyn Woods, to say the least. The 21-year-old model has been under scrutiny ever since news broke that she reportedly hooked up with Tristan Thompson, Khloé Kardashian’s on-again/off-again boyfriend and the father of her child. (Woods later confirmed it was only a kiss, à la "Mr. Brightside.") It was a lot, but now, it seems as though Woods has moved on from the drama. Well… maybe. Jordyn Woods reportedly partied with James Harden on July 24, and there is just so much to unpack here. Harden, for reference, previously dated Kardashian from the summer of 2015 until February 2016, according to PEOPLE.

According to TMZ, Woods was spotted at Belle Station in Houston, Texas on July 24, dancing and smoking hookah with Harden and some friends. TMZ has a video of Woods dancing in front of Harden, but not engaging or touching. But given prior rumors that they two have been involved, it is an interesting sight to see.

In February 2019, Us Weekly reported that Woods and Harden had previously hooked up. "Jordyn did hook up with James Harden after Khloé dated him first," a source reportedly told the magazine. However, Kardashian was "not with him at the time," when he and Woods hooked up. It was only five months ago when news broke that Woods and Thompson had reportedly hooked up at a house party in Los Angeles. As soon as the drama was made public, things got messy between Woods and the entire Kardashian-Jenner family. The drama played out on the internet, when Woods appeared on Jada Pinkett Smith’s Red Table Talk to tell her side of the story, claiming she and Thompson had not hooked up, but he did kiss her on the lips and she refrained from telling Kardashian. Kardashian, for her part, went on a Twitter rampage, going so far as to call Woods the reason her family "broke up." Woods’ former best friend, Kylie Jenner, is reportedly still having a tough time processing the situation. It was all very intense.

While Woods and Harden had reportedly hooked up before the whole Thompson controversy, Kardashian was reportedly aware of the situation. "Khloé knew that that happened before this Tristan Thompson fiasco," a source reportedly revealed to Us Weekly. "That’s not news to her. It wasn’t an issue at the time, but it does show now that Jordyn has a history of omitting facts and crossing lines." Yikes. Although, to be fair, Kardashian and Harden have been broken up for over three years now, and she has a gorgeous daughter to care for, so it’s likely that Kardashian doesn’t really care if Woods and Harden were to see each other again. Whatever the case, it seems abundantly clear that Woods has moved on from the Kardashian-Jenner drama. Perhaps she and Harden have a genuine connection, or maybe they just have fun together and are friends. No matter what, Woods wasn’t doing anyone any harm by living her life and having a fun time out. Just because Harden happened to be there as well, doesn’t mean anything was going on between them. And even if it was, it’s Woods’ business, and Woods’ business alone.