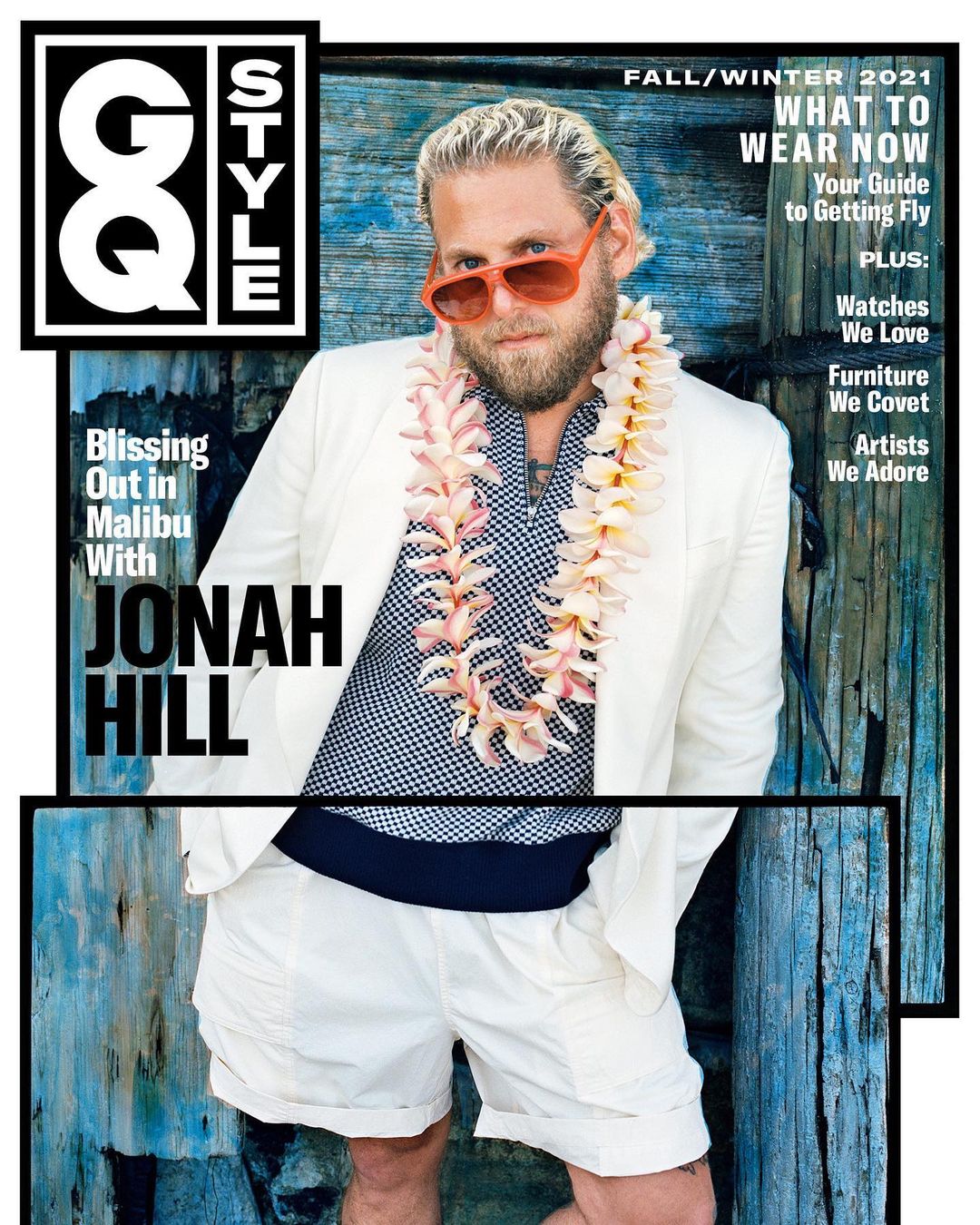 Jonah Hill covers the Fall/Winter issue of GQ Style to promote Don’t Look Up, the star-studded comedy about a global apocalypse. Jonah is in a really good place in his life right now, as you can see from the cover – he’s been in therapy for four years with a therapist he loves (he’s making a documentary about his therapist), he has tons of friends who love him, he has a dog, he lives in Malibu, by the beach, and surfs every day, sometimes twice a day. He’s an in-demand actor, writer and producer too. You can read Jonah’s full profile here – the interview was conducted by Jonah’s old friend Adam McKay. Some highlights:

Surfing: “I’m still a workaholic. I still write and direct and get all my projects in order and stuff. But then I also surf every day. I make myself surf every day. I don’t know if dropping out is kind of the accurate word, but I kind of dropped out a little bit. I still love my creativity and my work. But I definitely live a very quiet lifestyle, where I surf, hang with my dog, hang with my nephews. Just keep it mellow. I’ll surf at like 7 a.m., and if it’s good again at like 3 or 4 p.m., I’ll take a work break for an hour and surf.

He realized he doesn’t have to be full Method actor: “It’s not like you can live it like you did back in the day, and I don’t even think it’s fun to. When I was a younger actor and I would get Moneyball or something, I’d be like, I’m going to walk around as the character for two years. Now I’m like, F–k that, dude. I just come off as pretentious. It doesn’t help. I take my work seriously. But we should be having fun, and if we’re not, we’re just being miserable for some fake artistic pretentious reason, and I actually don’t think that’s rad.

His therapist told him he didn’t have to be a dark, miserable artist: “You know what the first thing Phil Stutz said to me was? First thing. He said, “You’re not a good artist because you’re f–ked up. You’re a good artist in spite of being f–ked up.” It’s all a dumb mythology that you’re supposed to be miserable to be talented, and it’s so absurdist. It’s genuinely: I got healthier, my art got better, and I was happier. Straight up. I haven’t seen misery bring better art out of anybody. I just haven’t.

Generational differences in how we see dark comedic geniuses: “I think the biggest generational difference I can throw out there is between how John Belushi’s death was perceived and how Chris Farley’s death was perceived. When I was a kid and I heard about John Belushi dying, it was romanticized, like, “Yeah, dude, he was punk rock and he died from heroin,” and all this sh-t. And then when I was 13 or 14, I lost Chris Farley, and the sh-t wasn’t sexy or romanticized. It was just sad. I cried for a f–king week when Chris Farley died, and it wasn’t like I was like, “How punk is that, dude?” It was like, “What the f–k? This sucks.” He should have had joy. That breaks my heart. So when you ask me what I do, I’m like, Work sh-t comes easy to me. I love work. I love being creative. I want to be happy. I literally want to be happy. That is the mission of my life, that I work hard at.

Dropping out of college: “I was a kid. I had probably too much power for a young person, and too much autonomy, and not enough life skills. I dropped out of college, and I used to not get why people would go to college. Because if you’re ambitious, why would you spend four years just idling? And then I didn’t realize until I turned 30 that what those four years gave all my friends was this wobbling period of how to be a person. I was really advanced professionally but really behind personally. All my 20s, I wasn’t really looking inward. I was just running toward success. Or trying to find success. And when I was 30, I was like, I’ve always wanted to be a director, but if I don’t get off this train now and write Mid90s, I’m not going to do it. And I hit Pause. I took three or four years to reshape things. I was like, I could just do this for 10 more years and I’m not going to evolve as a person.

Re: the college thing… I think it’s different for everyone. For Jonah, he’s right, he had the skills to succeed professionally at a young age and he was able to hit pause in his late 20s and early 30s and do that reassess and necessary growth as a person. Who knows if he would have needed to do that if he just stayed in college, or how different his life would have been. There are plenty of people who don’t have anything figured out after college, I’m just saying. Anyway, Jonah talked a lot about his therapist and the guy is really helping him and I love that. I love that Jonah is doing so well and he’s so happy.