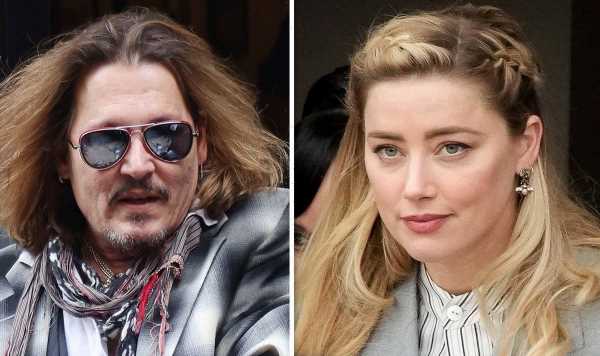 A new survey has revealed that Johnny Depp was viewed less favourably during his seven-week libel trial against Amber Heard. The Pirates of the Caribbean actor won the trial after the jury decided that Ms Heard did defame her ex-husband in her 2018 op-ed.

Mr Depp won all three of his claims, whereas Ms Heard won just one part of her countersuit over comments made by Mr Depp’s lawyer, Adam Waldman.

However, data obtained by intelligence company Morning Consult, reveals that the actor’s popularity has decreased.

The data looked at the opinions of 2,200 Americans throughout the duration of the trial from April until June.

Surveys found that the number of American adults with a “very” or “somewhat” positive view of Mr Depp declined by 12 points from 63 percent in April to 56 percent in June.

The most notable decline was among baby boomers aged between 58 and 76.

In April, 59 percent of baby boomers had a favourable view of Mr Depp. But by June that figure had decreased to 37 percent.

For younger respondents, the decline was much less.

His favourability rating remained almost the same among Gen Z adults with just a two-point decrease to 70 percent in June and a six-point drop among millennials to 72 percent after the trial had wrapped.

The results also state that Mr Depp was more popular with women as his favourability among men dropped from 67 percent to 52 percent.

Whereas figures for women saw just a nine-point drop during the same time frame.

Mr Depp’s popularity took the largest dip among Democrats with 70 percent viewing him favourably in April compared to 55 percent in June.

There was a smaller decrease with Republicans, with an eight-point drop from 65 percent to 57 percent.

Nevertheless, the 59-year-old has vowed to “get his life back” after winning his libel suit.

He has been performing on tour with Jeff Beck and the pair will release a joint album next month titled 18.

They have also released a song which details the difficulties of fame and pays tribute to actress Hedy Lamarr.

In the track called, This I A Song For Miss Hedy Lamarr, Mr Depp sings: “Erased by the same world that made her a star.

“Spun out of beauty, trapped by its web. She’s a perfect cocoon, entwined in gold thread.”

The father-of-two promoted the song to his 25 million Instagram followers on Thursday.