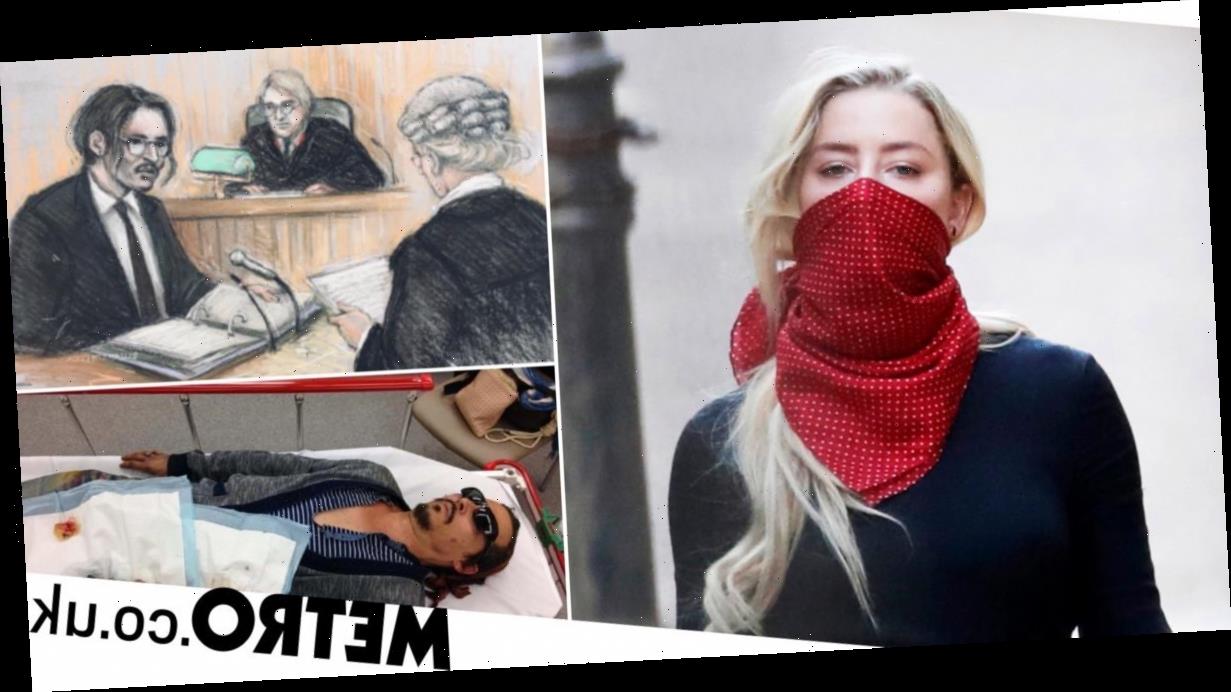 Johnny Depp alleged that Amber Heard punched him and severed his finger in a series of rows.

The 57-year-old today began his libel trial against The Sun’s publisher News Group Newspapers (NGN), in relation to an April 2018 column from the newspaper’s executive editor Dan Wootton, which referred to Depp as a ‘wife beater’.

Depp strenuously denies the allegations that he was abusive towards his ex-wife Heard, while lawyers for NGN argue that their description of the actor was ‘accurate and truthful’.

In one of his witness statements filed as part of his libel case, Depp said that ‘rage-filled violent incidents on planes were common with Amber’.

Mr Depp claimed that they were on a private chartered flight in late 2014 or early 2015 when Ms Heard became ‘verbally aggressive’, calling him a ‘p***y’ and ‘spineless’ for ‘running away’ from fights with her.

He said: ‘Then she became physically violent and repeatedly punched me in the face. As I moved towards the back of the plane to get away from her, she followed me into the plane’s bedroom and punched me again in the face and the head.

‘I pushed her away from me, onto the bed. I then grabbed a pillow and locked myself in the bathroom, where I slept for the duration of the flight.’

Mr Depp also described a period of time in Australia in March 2015 when he says Ms Heard severed his finger – an injury which she says came about after he smashed a telephone into a wall.

‘Amber severed my finger with the second of two thrown vodka bottles at me in the early afternoon of Sunday March 8. Amber claims this was on the second day of a “three-day hostage situation”,’ he said.

‘Amber claims that during these three days, I subjected her to a variety of what sounds like torture and other abuse. These sick claims are completely untrue.

‘Even the small details of these demonstrably false allegations are internally inconsistent and wildly diverge from the reality that is shown by hospital intake records and multiple eyewitness statements.’

Mr Depp said Ms Heard did not sustain any injuries at all that weekend, while he meanwhile sustained ‘grievous’ injuries including the severed finger ‘and a cigarette stubbed out on my cheek’.

He wrote: ‘As to the other “details” which Amber has now added, I did not urinate throughout the house, I did not paint Amber’s clothes, nor did I hide raw meat around the house.’

Responding to allegations of overbearing behaviour, he said in his statement: ‘I do not believe that I have an overbearing, manipulative or controlling personality, or that anyone who knows me well would describe me that way.

‘In contrast, I believe that Amber had an obsessive need to control me and all situations in our relationship.

‘I truly believe that most of the descriptions Amber provides are in fact reflections of her own behaviour.’

Pictures filed show Depp lying on a hospital trolley with the tip of his finger severed.

At a preliminary hearing for the trial in March, NGN’s barrister Adam Wolanski said that Amber alleged her ex-husband ‘shoved her into a ping-pong table’, grabbed her and then ‘tore her nightgown’ before he ‘slammed her against the countertop and strangled her’.

She claimed he ‘severely injured his finger, cutting off the top’, while he smashed a phone against a wall during the scenes, according to Mr Wolanski.

Mr Wolanski said there were ‘diametrically opposed accounts of what happened’, and submitted that two ‘highly damaging’ text messages sent by Depp to his personal doctor, Dr David Kipper, in March 2015 undermined his account.

One message read: ‘I cut the top of my middle finger off… What should I do!?? Except, of course, go to a hospital… I’m so embarrassed for jumping into anything with her… F**k THE WORLD!!! JD.’

A second message, sent around two weeks later, read: ‘Thank you for everything. I have chopped off my left middle finger as a reminder that I should never cut my finger off again. I love you brother. Johnny.’

Heard has denied the allegations of abuse against her.

– 8 March: Mr Depp allegedly tries to set fire to a painting by Ms Heard’s ex-partner Tasya van Ree before he is said to have attacked her for the first time, which the actor denies.
2015

– 3 February: The couple marry in a private ceremony at their home in Los Angeles.

– 3-5 March: The key incident in The Sun’s defence, the three-day trip to Australia has been described by Ms Heard as a ‘three-day hostage situation’ in which Mr Depp was allegedly physically and verbally abusive while drinking heavily and taking drugs.

Mr Depp denies the allegations and says Ms Heard lost her temper after a conversation about a post-nuptial agreement.

– 21 April: The couple arrive in Australia with their pet Yorkshire Terriers Boo and Pistol, which they did not declare to customs officials in Queensland. Ms Heard was charged later with bringing the dogs into the country illegally – the charges were later dropped and the pair later recorded a bizarre video apologising for bringing their dogs to Australia.

– Around 22 May: The pair separated, Ms Heard claims after an incident at their LA penthouse in which Mr Depp allegedly became very angry and destroyed property with a bottle of champagne.

– 23 May: Ms Heard files petition for the dissolution of their marriage.

– 27 May: Ms Heard applies for a temporary domestic violence restraining order, which prevents Mr Depp from contacting her.

– 16 August: The estranged couple reach an agreement concerning the dissolution of their marriage. Ms Heard later donates her seven million US dollar (£5.5 million) settlement to charity.

– 13 January: The couple are formally divorced.

– 27 April: The column by The Sun’s executive editor Dan Wootton is published online at around 10pm. Under the headline “Gone Potty – How can JK Rowling be ‘genuinely happy’ casting wife beater Johnny Depp in the new Fantastic Beasts film?”, Mr Wootton asked if the Harry Potter author had been ‘blinded by a personal friendship’ with Mr Depp.

– 28 April: The following day, the online article is amended to remove the words ‘wife beater’ from the headline, which was not included in the print edition.

– 18 December: The Washington Post publishes an op-ed by Ms Heard which did not mention Mr Depp by name, but said that the actress ‘became a public figure representing domestic abuse, and I felt the full force of our culture’s wrath for women who speak out’.

– 27 February: Mr Depp fights off a bid to halt his English legal action after The Sun applies for his claim to be ‘stayed unless and until’ the star confirmed in writing that he would not sue Ms Heard if she participated in a forthcoming trial.

– 1 March: Mr Depp files a libel case against Ms Heard in Virginia, blaming the Washington Post piece for Mr Depp being dropped from the Pirates Of The Caribbean franchise and claiming that Ms Heard was the one who had been abusive towards him.

– 26 February: Johnny Depp attends the High Court in London for a preliminary hearing ahead of a trial which was due to begin the following month. The star heard NGN’s barrister Adam Wolanski read out texts sent by Mr Depp, including one from November 2013 to actor Paul Bettany, in which Mr Depp wrote: ‘Let’s burn Amber.’

He also wrote: ‘Let’s drown her before we burn her!!! I will f*** her burnt corpse afterwards to make sure she is dead.’

– 20 March: The trial, which was due to begin on 23 March, is postponed due to the global coronavirus crisis. NGN’s lawyers had claimed Mr Depp wanted to delay the trial ‘because he’s a coward and because he knows he’s going to lose’, which was denied by Mr Depp’s legal team.

– 8 April: Mr Justice Nicol rules that parts of Ms Heard’s evidence, relating to allegations of sexual violence, will be heard in private.

– 13 May: The court gives permission for Mr Depp’s former partners Vanessa Paradis and Winona Ryder – who both say Mr Depp was ‘never violent’ to them – to give evidence. Ms Heard’s former personal assistant Kate James is also permitted to give evidence.

– 25 June: NGN asks the court to throw out Mr Depp’s claim just two weeks before trial over the star’s failure to disclose text messages of him apparently trying to buy drugs in Australia in 2015. The publisher’s lawyers say Mr Depp deliberately withheld text messages they say show him trying to obtain ‘MDMA and other narcotics’.

– 29 June: Mr Justice Nicol rules that Mr Depp did breach a court order by not disclosing documents from separate libel proceedings against Ms Heard in the US – which include the text messages. But Mr Depp’s lawyers argue that it would be ‘wholly disproportionate’ to strike out the actor’s libel claim.

– 2 July: The High Court rules Mr Depp’s claim can go ahead after granting his application for ‘relief from sanctions’ for the breach of a court order.