Joe Jonas took to Instagram to share several photos of him, his wife Sophie Turner, and his brothers Kevin and Nick Jonas, enjoying a memorable night at Fenway Park in Boston, MA.

Joe Jonas, 32, and his wife Sophie Turner, 25, took their love to Beantown and are proudly announcing it on Instagram. The singer shared a post full of various new photos, including one of him and the actress smooching, as they spent the night at Fenway Park in Boston, MA on Oct. 1. The lovebirds wore matching blue and red jerseys that read “Fenway” and “21” on the back in the epic snapshot as they put their arms around each other and walked on stage during the memorable moment.

The post also included pics of Joe’s brothers, Kevin Jonas, 33, and Nick Jonas, 29, who were also at the park to put on a Jonas Brothers show with Joe. The boys were smoking cigars and drinking what appeared to be wine as they toasted to an empty arena either before or after the show. “Magical night in Boston ❤️ #RememberThisTour,” Joe captioned the post, which was met with a lot of responses.

“You guys are the cutest,” one follower wrote while another shared that they “loved the concert.” A third exclaimed, “I had the best time! Thank you so much for an incredible show! I am so proud of you guys and how far you’ve come!” and a fourth wrote, “It was so amazing!” 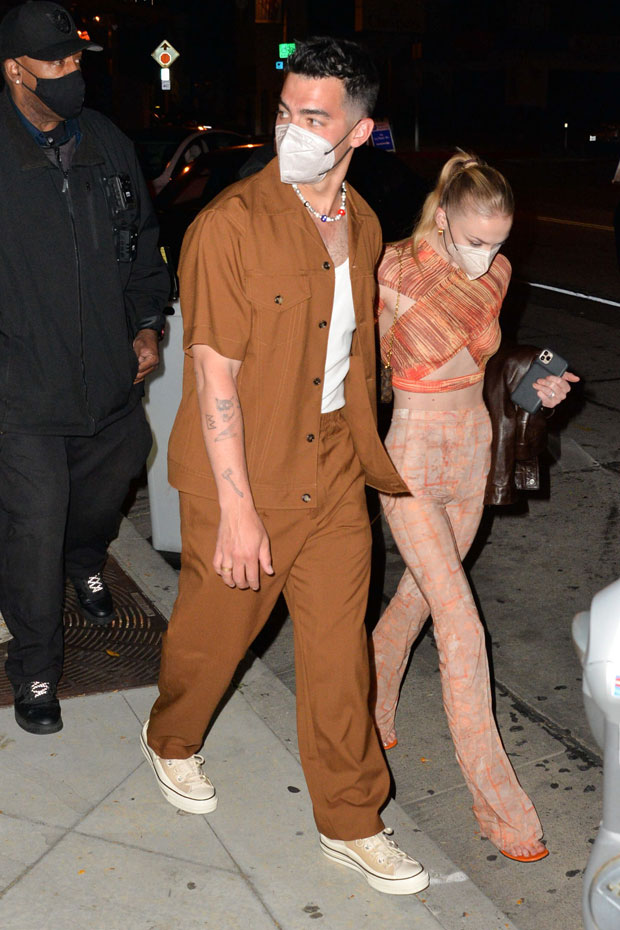 Before their Boston show, Joe and Sophie made headlines for being spotted in New York City. The Game of Thrones beauty showed off crimped red hair that was perfect for the beginning of fall as she walked with Joe and his brothers outside in the Big Apple. She wore a colorful comfortable-looking sweatshirt and jeans during the sighting and kept a white face mask over her nose and mouth to keep safe.

When Joe and Sophie aren’t visiting different cities for the Jonas Brothers tour, they’re staying home with their one-year-old daughter Willa. The proud parents just bought an $11 million mansion in Miami, FL and it includes a wine cellar, an atrium, a gym, a pool, and a koi pond, among other amenities, so it’s sure to be an incredible place to raise their little girl!