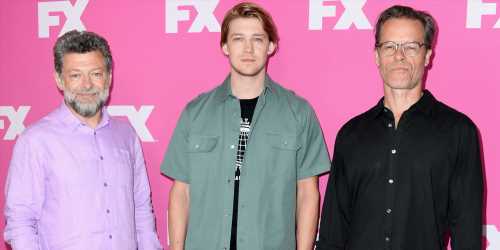 Joe Alwyn stands in between Andy Serkis and Guy Pearce while arriving at FX Networks Starwalk Red Carpet At TCA held at The Beverly Hilton Hotel on Tuesday (August 6) in Beverly Hills, Calif.

The three actors stepped out to promote their new special, A Christmas Carol, which will air later this year on the network.

Joe will star as Bob Cratchit in the retelling of the classic Charles Dickens tale, with Andy playing as the Ghost of Christmas Past and Guy as Ebenezer Scrooge.

The BBC says that the special “is a unique and original take on the novel, and a haunting, hallucinatory, spine-tingling immersion into Scrooge’s dark night of the soul.”

10+ pictures inside of Joe Alwyn, Guy Pearce and Andy Serkis at TCA…