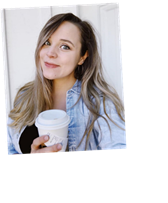 As you’re probably aware, Jinger Duggar is currently pregnant with her second child.

In most parts of this country, having two kids at the age of 26 is unusual, but in Duggarville, lots of folks have already sired a baseball team worth of young’uns by that age.

Jinger bucked the trend by waiting a full year to get pregnant following her marriage to Jeremy Vuolo.

Again, this is something that’s perfectly normal,evenb encouraged buy

The good news about Jinger holding off a bit (by Duggar standards) before expanding her famil\y is that she to got watch several of her sisters endure pregnancies in the public eye before she went through it herself.

Mom-shaming the Duggars is a favorite pastime in certain corners of the internet, and the critics are especially vocal during pregnancies.

Jinger is aware of this, which is why she heads off haters at the pass when posting something that could provide them with ammo.

Jinger’s love of coffee is well known, and her latest Instagram pic shows her enjoying a cup of joe.

It’s the sort of pic that Duggar critics dream about, and Jinger posted it herself.

Fortunately, she anticipated the trash-talk that she would receive if she failed to provide specifics.

Then, crucially, she added the all-important hashtag: “#yesitsdecaf”.

As many fans pointed out, Jinger shouldn’t have to explain herself to anyone, especially since pregnant women can safely consume caffeine.

“Even if it’s not decaf, you’re “allowed” caffeine while pregnant,” one commenter wrote.

“Drank caffeine all four pregnancies. No one’s judging,” a third chimed in.

Sadly, some people are judging — or at least they would be, if Jinger hadn’t been so specific in her post.’

We’re sure it’s exhausting, and we bet there are times when Jinger wishes she wasn’t famous.

As we always do with stories like this one, we’d like to take this opportunity to remind you that there are conutless legitimate reasos to make fun of the Duggars.

Josh is a sex pest; Jim Bob is a greedy megalomaniac … the list goes on and on.

So when you feel the need to roast the Duggars — as we all do, from time to time — please stick to the list of apprved topics.

There’s really no need to go off on someone for drinking a cup of coffee.