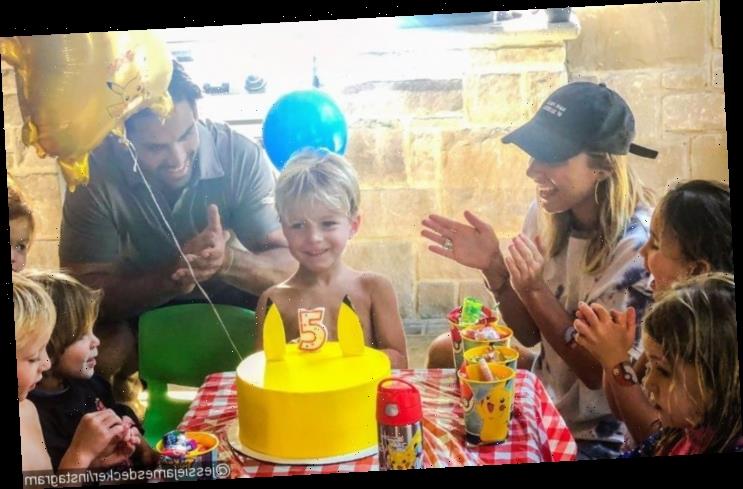 After the singer shares on Instagram photos of her son Eric celebrating his birthday with several of his friends, one follower sarcastically asks her, ‘No pandemic there anymore?’

AceShowbiz –Jessie James Decker is standing by her decision to throw a birthday party for her son amid the coronavirus pandemic. The “Flip My Hair” singer was met with a sarcastic comment from a fan after she shared photos of Eric Thomas II’s fifth birthday bash on social media, forcing her to offer some clarifications.

The Instagram photos at issue were initially posted by the 32-year-old on Saturday, September 5. One saw her birthday boy standing in front of a Pokemon themed cake while being surrounded by his father, his siblings and some of his friends. In all of the pictures, none of the children were wearing any protective face mask.

In accompaniment of the celebration photos, the Kittenish creator gushed about the bash, “We had the best day celebrating Bubby’s 5th birthday!” She added, “So grateful for such wonderful friends who celebrated with us!! Bubby had the time of his life!!!”

Many of Jessie’s followers were quick to send best wishes for her son and other positive comments. One person in particular, however, seemed to be displeased by the gathering of people in the midst of the pandemic. The social media user sarcastically asked in the comment section, “No pandemic there anymore?”

The shading apparently caught Jessie’s attention, who in return responded, “I understand your concern. We’ve been very careful.” She went on assuring the fan about the safety precaution she took. “This small group of children celebrating Bubby are already in the same class at school so we are around each other all the time already,” she explained.

Jessie James Decker responded to a fan shading her over son’s birthday party amid pandemic.

Jessie was not the only one who spoke up against the concerned fan. Some of her devotees have also come to her defense with one firing back, “who asked you ?? Mind your own business and worry about yourself.” Another fan echoed similar sentiment, “oh lord go get a life and mind your own business if you have nothing nice to say about this family!” A third pointed out, “children are very poor spreaders of this virus.”

Jessie James Decker’s fans defended her from the sarcastic comment.

Days before the party, Jessie commemorated her son’s milestone with a heartfelt Instagram tribute. Along with two photos of her and her happy boy, she wrote, “This special, sweet, quirky and kind hearted ray of sunshine brightens up my life daily.” She added, “He is so special and kind hearted and I don’t know what I would do without you my little boy. I’m so happy you were born.”