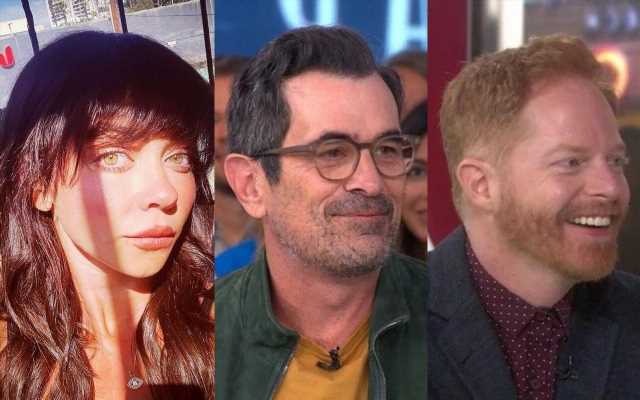 The Mitchell Pritchett depicter was tapped to replace the ‘Incredible Hulk’ actor who was supposed to officiate his on-screen daughter’s wedding but had to pull out days before the event.

AceShowbiz –Jesse Tyler Ferguson became “understudy” for Ty Burrell at Sarah Hyland‘s wedding. Serving as the officiant when his former “Modern Family” co-star married Wells Adams earlier this month, the 46-year-old actor admitted he wasn’t first choice for the job because the bride had initially asked her on-screen father to do the honours, but he had to pull out due to a “family emergency.”

“I don’t know if people know this, but Ty Burrell was meant to do it, and there was a family emergency,” Jesse revealed. “So, I got a phone call 12 days before the wedding, and that’s why Ty wasn’t there, he had stuff going on.”

Jesse joked he felt “no pressure” when he was offered the role. He added to “Entertainment Tonight”, “Everyone [from the cast] was invited and not everyone could make it, but I had 12 days, and I was like, ‘Well, no pressure, this is my first time, and then it’s going to be a wedding, and it’s going to be in Vogue magazine, and there’s also going to be paparazzi shots of me from a helicopter, officiating, no pressure.’ “

Fortunately, he was able to call on Ty for some guidance ahead of the big day. He said, “But I did call Ty, like, ‘What are some of your bullet points that you were going to talk about, because I need to fast track this.’ He hadn’t written anything up, but he had some ideas, and I was like, ‘Oh, this is all really good. This is a jumping-off place.’ I was honoured to do it. Very happy to understudy Ty Burrell.”

The “Take Me Out” star – who has son Beckett, two, with husband Justin Mikita – also looked to his own wedding for inspiration when working out what he wanted to say. He said, “I knew that Sarah and Wells wanted it to be a funny, lighthearted ceremony. They’re not serious people, but you also don’t want to lean too heavily into the jokes because it’s a big day.”

“Justin — my husband and I, had Tony Kushner officiate our wedding — Pulitzer prize award-winning playwright, and he wrote this really lovely, beautiful ceremony for us, and it meant so much to me. I actually looked at that ceremony again before writing one for Sarah and Wells, so you know, heart is important.”