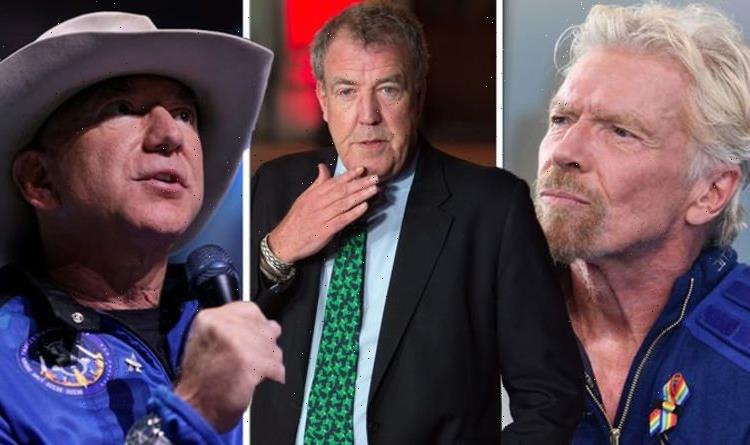 Jeremy Clarkson gives insight into 'busy night' on the farm

Jeremy Clarkson has slammed people for arguing over the “pointlessness” of their trip into space, after it was argued that the billionaires wasted their money. The Grand Tour presenter defended the two entrepreneurs’ recent exploration, as he addressed “do-gooders in leftie suits”.

On July 11, Sir Richard Branson flew on-board Virgin Galactic’s SpaceShipTwo to the edge of space as a test, before allowing customers aboard next year.

Nine days later Amazon founder Jeff Bezos was among the passengers on the New Shepard vessel.

The former Top Gear presenter has since addressed their decision to travel to space in his latest column.

Writing in his column, Jeremy said: “In the past couple of weeks Sir Branson and Jeff Bezos have been into space, and now everyone is queuing up to scoff at the pointlessness of it all.

“There are eco-morons on social media whistling through their nose piercings, mistaking the water vapour coming out of the ships for smoke.”

He continued in the Times: “And then there are do-gooders in leftie suits saying that the money ‘wasted’ on these rocket-propelled high-jinks high jumps should have been spent on solving world hunger.

“And then came BBC News, which announced sourly that Jeff ‘s flight had been ‘short.'”

Jeremy argued that the public should be happy with the billionaires’ achievements as he explained that both businessmen were not born into spectacular wealth.

He added: “And I think it’s fantastic that they now have the wherewithal to do what only superpowers could do just 60 years ago. I think it gives us all hope.”

The Clarkson’s Farm presenter admitted he despises when people utter the phrase “it’s alright for some” when someone is successful or gets lucky.

Jeremy added: “Now, though, we resent Kate Moss for being pretty and Sir Branson for being rich and Peter Crouch for being married to Abbey Clancy.

“It’s the worst thing about Britain, by miles.”

Bezos founded Blue Origin in 2000, just six years after he started Amazon, with the goal of making spaceflight more affordable and more accessible.

A few of his rivals in the industry — most notably Elon Musk and Richard — both started their space ventures around the same time.

There’s been plenty of blowback about billionaires in space, including a recent online petition that garnered more than 162,000 signatures asking for Bezos never to return to Earth.

Sir Richard first announced his intention to make a space plane in 2004, with the expectation he’d have a commercial service available by 2007.

But technical difficulties, including a fatal crash during a development flight in 2014, have made the space project one of the most challenging ventures of his career.

“I’ve wanted to go to space since I was a kid, and I want to enable hopefully hundreds of thousands of other people over the next 100 years to be able to go to space,” Sir Richard told the BBC.

“And why shouldn’t they go to space? Space is extraordinary; the Universe is magnificent. I want people to be able to look back at our beautiful Earth and come home and work very hard to try to do magic to it to look after it.”