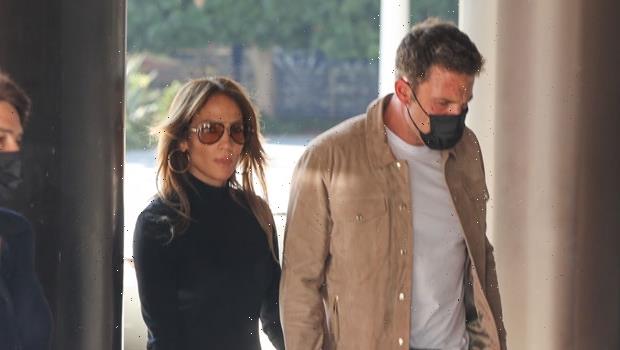 Ben Affleck and Jennifer Lopez emerged in West Hollywood on Oct. 3 as they headed to an event.

Ben Affleck, 49, and Jennifer Lopez, 52, aren’t shy about showing their love. The rekindled couple sweetly held hands in West Hollywood on Sunday, Oct. 3 as they made their way to an event in West Hollywood. J.Lo looked gorgeous in a fitted black turtleneck and high slit skirt which she paired with a pair of leather knee-high boots. The “Jenny From The Block” singer added a pair of plastic black sunglasses to her stylish ensemble. 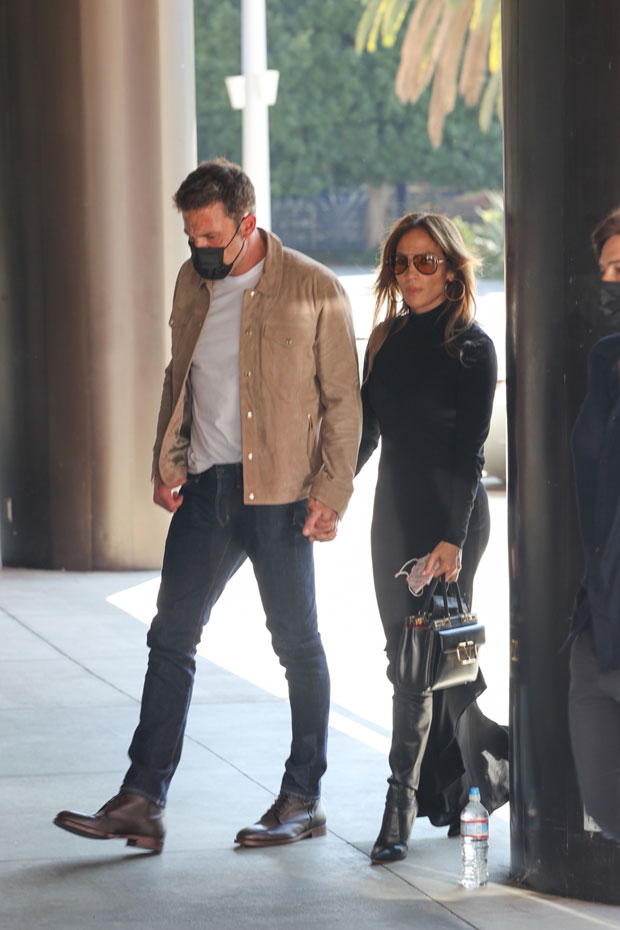 She held Ben’s hand the entire time as they strolled through what appeared to be a parkade area, hanging onto a black leather handbag in the other, along with a protective black face mask. She finished her look with a signature pair of silver hoop earrings. Ben stayed true to his Boston roots with a casual ensemble, consisting of a beige button down shirt which he wore over a white tee. The Oscar winner paired the neutral colored shirts with a black pants, along with a mask.

Jennifer has been out-and-about in Los Angeles all weekend, enjoying a breakfast with her twins Max and Emme, 13. The teenagers and their stunning mom stopped by Ben’s home in the Pacific Palisades neighborhood before grabbing a bite. Jennifer ditched her usual glam style for a navy blue Playboy crewneck, along with a ripped pair of skinny jeans and a white Birkin handbag.

Just last week, Ben and J.Lo were spotted in her hometown of New York City where they enjoyed some alone time together! The couple looked so in love as they held hands for a romantic Central Park stroll, laughing and smiling for the cameras. At one point, the “Dear Ben” singer and Pearl Harbour actor stopped to share a steamy sidewalk kiss, clearly not shy about showing some PDA.

The couple took a major step forward in their relationship by going red carpet official at the Venice Film Festival in September! Following the epic appearance, Ben opened up one of the things he still loves about Jennifer. “All I can tell you is that I have seen firsthand the difference representation makes because I have seen, over and over and over and over, women of color approach Jennifer and tell her what her example as a strong woman and a woman succeeding and demanding her fair share in the business world means to them,” Ben told AdWeek on Sept. 20. “I am in awe of what Jennifer’s effect on the world is.”