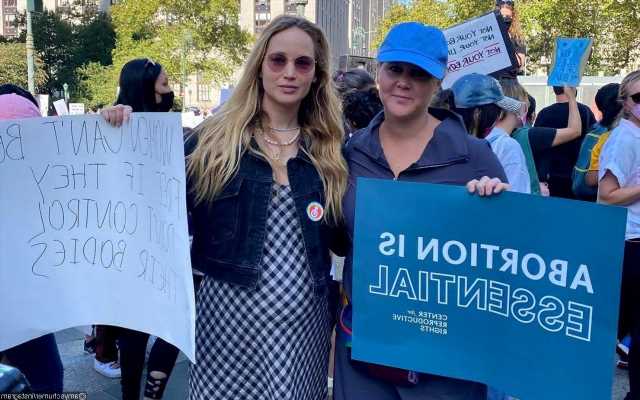 The ‘Hunger Games’ actress and the ‘Trainwreck’ star take to the streets of the Big Apple, joining Women’s March with a number of activists to rally for abortion justice.

The pregnant 31-year-old actress and the “Trainwreck” star took part in the rally for abortion justice outside the U.S. Supreme Court.

“The Hunger Games” star was photographed holding a handwritten sign which read, “Women can’t be free if they don’t control their bodies.”

Amy, who recently had her uterus and appendix removed because of endometriosis, took to social media to post a snap of the two pals posing for a picture at the protest, writing, “I don’t have a uterus and she is pregnant but we (are) out here @womensmarch @plannedparenthood #rallyforabortionjustice.”

The “I Feel Pretty” star announced she would be part of the protest on Friday, writing, “Everyone deserves to have a safe and supported abortion, at any time and for any reason. This Saturday, we are coming together across the country to defend our rights.”

The rally comes after Texas Governor Greg Abbott signed new legislation which bans almost all abortions in the state and punishes anyone who aids a woman attempting to terminate a pregnancy.

She raged, “I can’t answer medically because there is no research on this s**t, because they only happen TO WOMEN and there is no time to study them because all resources need to be funneled into researching ERECTILE DISFUNCTION. THERE IS BARELY ANY RESEARCH ON ENDOMETRIOSIS WHICH OVER 10 percent of women have.”