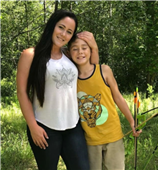 It feels like just yesterday that we were watching Jenelle on 16 and Pregnant, saying immature things about becoming a mother that made sense because she was, you know, 16.

And you’d think that in all that time, Jenelle would have grown up a little bit, learned some things about … well, anything.

Unfortunately, that does not seem to be the case.

Sure, she’s managed to maintain custody of the other two children she had after Jace, and they’re like alive and physically OK and everything.

And yeah, she doesn’t do heroin anymore, which is sincerely wonderful.

But she still makes terrible choices constantly when it comes to raising her children.

She provided another example of this phenomenon earlier this week when she showed off the birthday present she got for Jace.

She showed off the gift in a video on TikTok, and she explained that they had to wait for the crossbow to arrive in the mail because they’d ordered him a special left-handed one.

The video showed Jace practicing shooting it (more on that in a moment), Kaiser holding it, and David giving Jace some pointers on how to work it.

It also featured Jenelle and David drinking wine — she actually felt the need to announce that they’re now wine drinkers in addition to beer and liquor drinkers, which seemed like a strange thing to include in a kid’s crossbow video, but here we are.

She ended the video by saying that Jace had a lot of fun with his gift, which is great, of course.

It’s nice to see him having fun, and archery seems like a fine hobby for a kid Jace’s age.

But the problem, as always, is Jenelle and her inability to do things in a safe, knowledgeable way.

If you check out the comments on the video, there are plenty of people congratulating her on the great gift and talking about how big Jace has gotten.

But there are also a ton of comments talking about something called dry firing.

“Oh my lord NEVER dry fire a compound bow,” one person told her.

“WHY DID HE DRY FIRE THE BOW LIKE THAT?!” another person asked.

Dry firing is just shooting a bow without an arrow loaded, but apparently it’s bad for the bow and dangerous for the shooter and anyone in the general vicinity.

It vibrates the bow so much that parts can fly off, and some people have said that they’ve even seen bows explode after being dry fired.

She did respond to one person telling her to be careful with this, saying “Lol thanks, David just explained it to me. Me and Jace had no idea.”

If you’re giving your child something that could easily be used as a weapon, it may be a good idea to do some thorough research on it.

Jenelle Evans: Her Most Jaw-Dropping Moments From 16 & Pregnant to 29 & Bonkers!Start Gallery

And if you live in a home with David Eason, it may just be better to just not have weapons around at all.

What do you think about Jace’s birthday present?