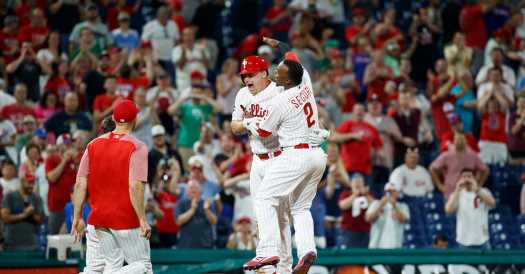 PHILADELPHIA — Jay Bruce ripped an R.B.I. double in the bottom of the 10th inning against his former team, giving the Philadelphia Phillies a 5-4 victory over the Mets on Wednesday night.

The Phillies overcame a 4-0 deficit against New York’s bullpen, spoiling a strong start from Jason Vargas, who tied a career high with 10 strikeouts before being pulled after only 77 pitches.

Facing Stephen Nogosek (0-1) in the 10th with runners on first and second, Bruce sent a drive over Juan Lagares’s head in center to give Philadelphia its third straight win over the Mets.

Vargas allowed two runs and three hits in 6⅓ innings, but he exited after J.T. Realmuto doubled to start the seventh and Bruce flied out to deep center. Cesar Hernandez greeted Seth Lugo with a ground-rule double, cutting the deficit to 4-2. Pinch-hitter Brad Miller walked with two outs and Scott Kingery reached on a wild pitch after striking out swinging.

Jean Segura then hit a tying, two-run single to right-center.

Dominic Smith and Jeff McNeil hit solo homers for the Mets, who have lost four in a row.