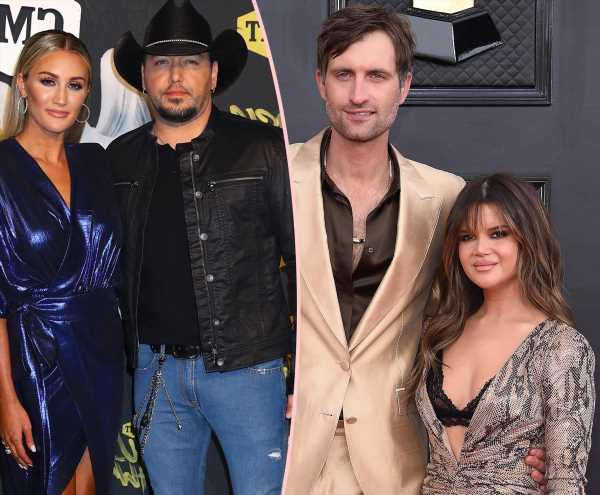 The husbands have entered the chat…

Shortly after Maren Morris and Brittany Aldean’s battle on social media over the latter’s transphobic post, their respective partners, Ryan Hurd and Jason Aldean, took to social media to weigh in on the entire situation. As we previously reported, the two women made headlines this week when the country singer and Cassadee Pope called out the 33-year-old influencer for the transphobic caption she wrote in a makeup tutorial posted on Instagram. She wrote on Friday:

“I’d really like to thank my parents for not changing my gender when I went through my tomboy phase. I love this girly life”

Her problematic post quickly sparked backlash, with many people slamming the remark, including Maren and Cassadee. The former The Voice winner tweeted:

“You’d think celebs with beauty brands would see the positives in including LGBTQ+ people in their messaging. But instead, here we are, hearing someone compare their ‘tomboy phase’ to someone wanting to transition. Real nice.”

The Middle artist then responded to Cassadee’s tweet with support, adding:

“It’s so easy to, like, not be a scumbag human? Sell your clip-ins and zip it, Insurrection Barbie.”

From there, a whole bunch of back-and-forth ensued between the three stars. The boutique owner continued her problematic streak, clapping back at the two performers on Instagram Stories:

“Advocating for the genital mutilation of children under the disguise of love and calling it ‘gender-affirming care’ is one of the worst evils. I will always support my children and do what I can to protect their innocence. The other day, Memphis wanted to be a dinosaur and tomorrow Navy will want to be a cat, they’re children. Some parents want to be accepted by society so badly that they’re willing to make life-altering decisions for their children who aren’t old enough to fully comprehend the consequences of those actions. Love is protecting your child until they are mature enough as an adult to make their own life decisions. … Until then, leave children alone!”

Later on, Maren also responded to a message on Twitter from someone who said they were confused why she, Cassadee, and Brittany were fighting over politics before telling them to “put down the phone & focus on the guitar” instead. The Bones songstress quickly fired back on Saturday, pointedly responding:

“If it’s confusing to you, it’s because you think we’re ‘fighting’ over politics. We’re not. This isn’t political. We’re calling someone out for being transphobic and thinking it’s hilarious. It isn’t.”

And just when you thought the war of words was over, it looks like Maren and Brittany’s husbands are now offering up their stances on the matter. Ryan – who is also a fellow country singer-songwriter – took to Twitter on Saturday night to praise his wife for speaking out:

“Scoring quick points by picking on trans kids isn’t something that is brave at all. And I’m proud of Maren for sticking up for them. Badge of honor to have CO engage in completely normal discourse, too. Shut up and sing only applies to those who you disagree with…”

“Getting a lot of people telling me our career is over, as if the last time she spoke up about something it disappeared. Honestly, we’re pretty ok over here. Tours are good, got a 2-year-old we love, we’re fucking fine, and I promise she isn’t going to shut up now.”

Meanwhile, Jason decided to react to Maren’s comment about “Insurrection Barbie” and commented on a picture his wife posted:

We’ll have to see if any more words will be exchanged between everyone again. Thoughts on the latest, Perezcious readers?