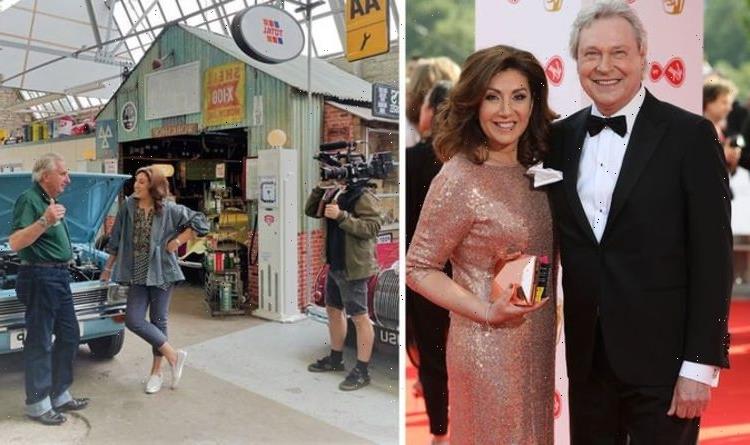 Jane McDonald, 58, took to social media this morning to give her fans an update. The Wakefield-born singer revealed she is back in Yorkshire filming scenes for an unknown upcoming project.

Jane posted a set of pictures on Twitter today, as she interviewed a car mechanic in what appeared to be a vintage garage.

The 58-year-old said she was having a “fantastic week” at work, while sharing a sneak peek at what she was working on.

Another snap showed the TV star talking to someone at a cafe as the cameras rolled.

It comes six months after the death of her partner Eddie Rothe, who died following a battle with lung cancer in March.

“I’m having a fantastic week doing some filming… love that I’m in Yorkshire #Yorkshire,” Jane wrote alongside the images, which she shared with her 172,400 followers.

“Can’t wait to see what you’re up to,” one person remarked in the comments section of her post.

“Looks like u having fun Jane, can’t wait to watch this on tv hun lots of love. Stay safe,”(sic) another added.

A third person said: “It’s great that you are filming locally, Jane! Look forward to seeing this when it is aired!

“Can’t wait to see the finished production we’ve missed having fresh Jane McDonald TV, however there’s nothing wrong with Jane McDonald repeats,” a fourth chimed in.

“I’ve been watching the original Cruise series on iPlayer and it’s brilliant. You were a star from the start,” another fan gushed.

During the summer, Jane has been on the road with her Let The Light In tour, which coincided with the release of her latest album of the same name.

“My 2021 tour has absolutely flown by!” she informed her followers in an update on September 6.

“I’ve had the most amazing time touring with my fabulous band and getting to see you all again has been fantastic!

“Thank you to everyone who came along to see me perform.

Her tour of the UK continues in the summer of 2022, when she will visit Blackpool, Manchester and Edinburgh, to name but a few locations.

In addition to the coronavirus pandemic, Jane has had a very difficult year.

Back in April, a statement on social media announced the death of her fiancé Eddie.

“It is with immense sadness that we share the news that Jane’s beloved long term partner, Ed, passed away on Friday 26th March. He had been battling lung cancer for the last few months.

“We would like to thank everyone for all their help and support during this very difficult time, especially the NHS staff and the wonderful team at The Wakefield Hospice.

“The funeral took place earlier today and we would please ask for your kindness in observing Jane’s privacy for her and Ed’s family at this sad time,” it read.