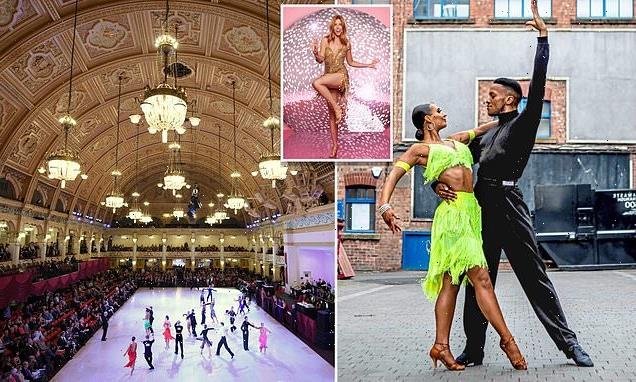 Tears, tans, tangos and the amateur dancers who make Strictly stars look like slackers in sequins: JANE FRYER gives the lowdown on a Stacey Dooley TV show that reveals the unseen drama of the British ballroom championships

Pretty much every spring since 1920, the world of competitive ballroom has cranked into manic overdrive.

Around the globe there is fevered preparation — a frenzy of anticipation, a fiesta of fake tan and a surfeit of teeny, sequinned dresses.

It culminates in a samba across the immaculately-sprung floor of Blackpool’s Empress Ballroom — and the final of the British Open.

This is the pinnacle of true ballroom and Latin American dancing. For 96 years, dancers from up to 64 countries have tangoed into Blackpool to compete in the 13-day annual Blackpool Dance Festival. Careers are made here. Dreams come true. Many, many tears are shed.

‘Blackpool is our Wimbledon — our major, major championship,’ explains Oskar Odiakosa, an amateur dancer-cum-chartered accountant from Beckenham, Kent, who appears in the Rising Stars category. ‘If you want to build a legacy, you’ve got to win Blackpool.’ 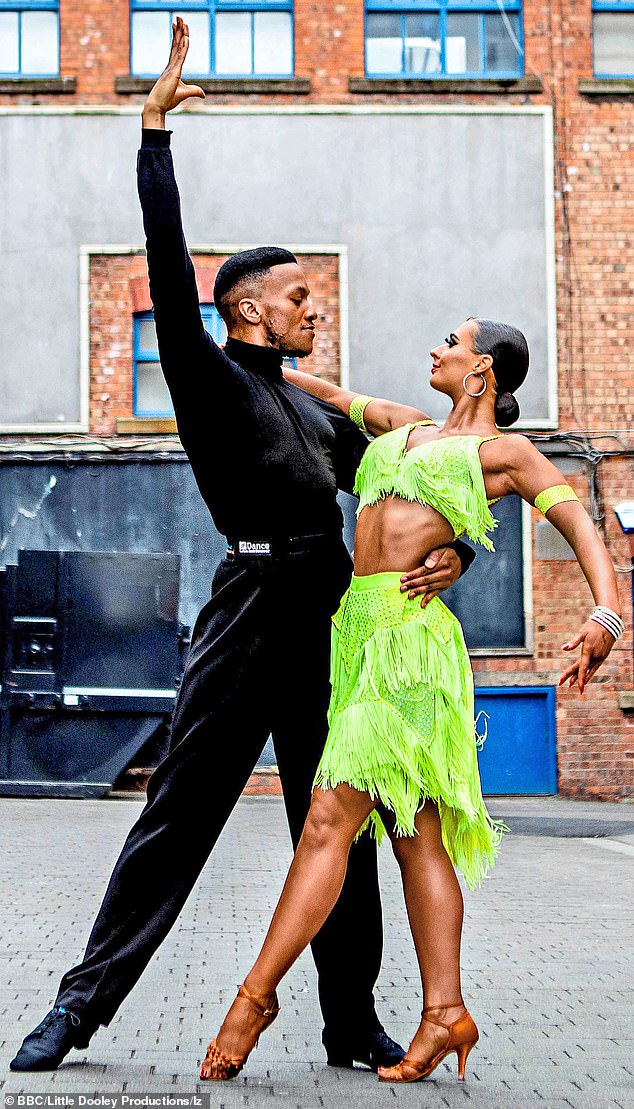 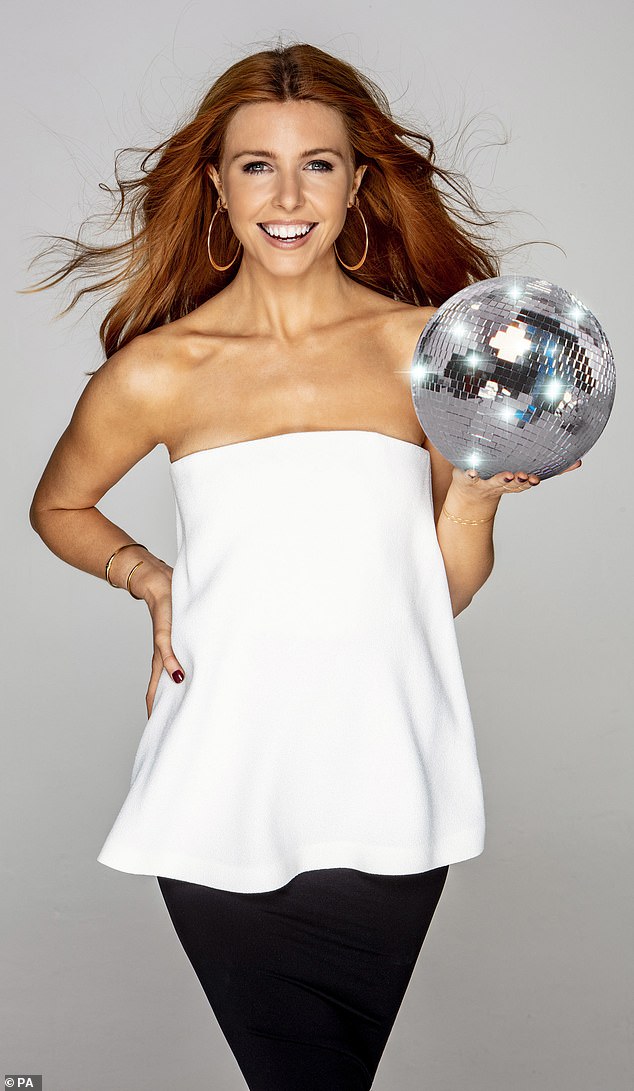 Thanks to former Strictly Come Dancing winner and film producer Stacey Dooley, we are taken inside Blackpool

Thanks to former Strictly Come Dancing winner and film producer Stacey Dooley, we are taken inside the fabulous art deco building where it isn’t just celebrities ‘having a go’ for a month or two, but real dancers who have dedicated their lives to be the best of the best.

In Blackpool’s Dance Fever, we see it all. Everything from the highly-polished chandeliers hanging from the ornate ceiling, to the crisp white dinner jackets of the Empress Orchestra. The dozen judges flown in from around the world, who strut about with clipboards — and the former champions glowing with success on the side-lines.

Then there are the competitors, jiving round after round, as numbers are whittled down from the hundreds to the 12 hallowed finalists.

‘I’m in internal audit, in real life’, he says. ‘But here we’re driven by art and passion for our craft.’ She’s a lettings agent also from Kent.

For the 40-plus hours a week they’re not doing their day jobs, they are training either together, or apart, or travelling to competitions at home and abroad — about 15 a year, on average. 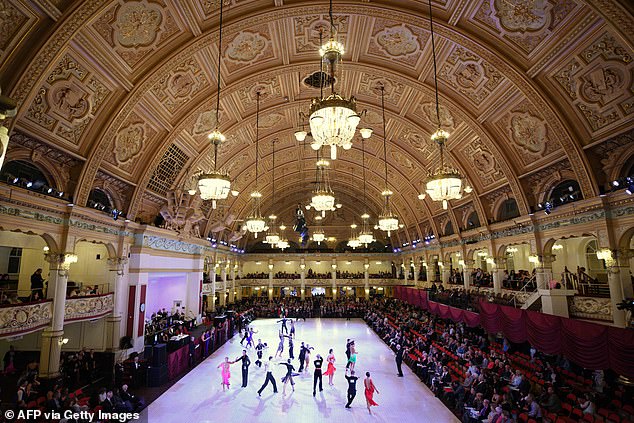 Oskar explains: ‘Walking out in Blackpool is like walking into a completely new kingdom. Just like a fairy tale — it inspires you to dance your heart out, to be your best.’ 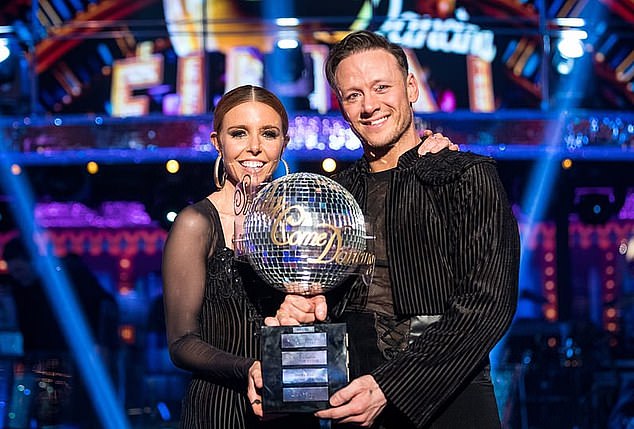 The professionals take it even more seriously. Darren and his Ukrainian partner Marina have been dance partners for a while, but this is their ‘first Blackpool’. They are hoping for first place in the Professional Latin event — the most prestigious category.

Neither thought they’d make it here. Earlier this year, Darren, a great strapping South African decorated with tattoos, was still recovering from double hip surgery that had left him in a wheelchair.

‘Both hips! I thought it was over,’ he says. ‘I thought I was done with competing.’

Then, just as he was finally recovering with the help of a Ukrainian doctor friend of Marina, the war broke out.

‘Dancing saved us. If she can get through that, then the competition is the easy part,’ he says. 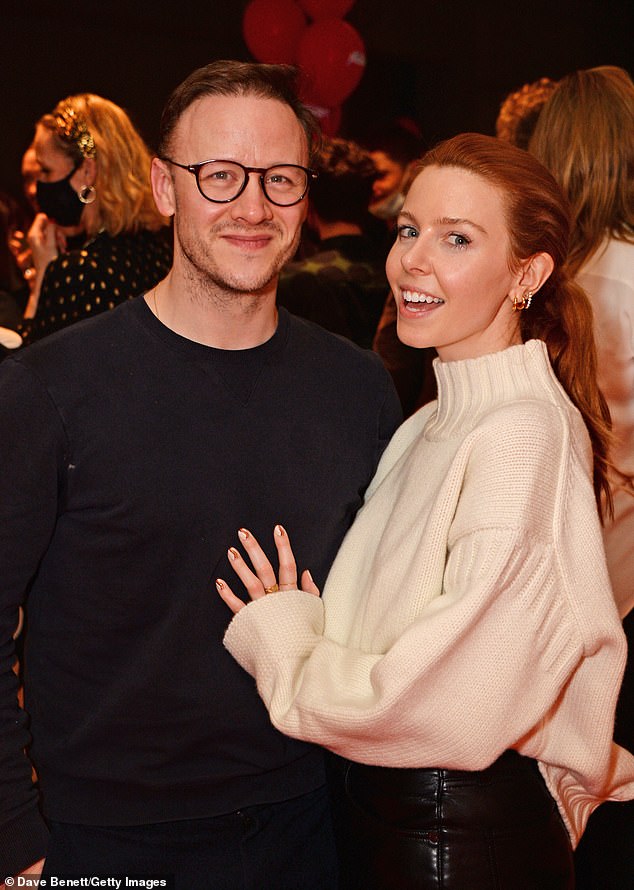 Kevin Clifton and Stacey Dooley. The couple got together following their season on Strictly Come Dancing in 2019, and are now expecting a baby together

With every dancer, the passion is palpable. They all appear to have had some kind of calling.

A need to dance. To lose themselves in movement. ‘When I hear the orchestra, it’s just butterflies inside. It’s something unbelievable. The vibrations pick you up and carry you across the floor,’ says Darren.

‘When I’m dancing it’s exactly where I’m supposed to be,’ adds Rebecca Scott, 24, who has been samba-ing since she was four.

For her partner, 23-year-old Lloyd Perry, from Wales, dancing was inevitable.

His grandparents were professional ballroom dancers. His parents run a dance school. His younger sister also competes. He had ‘no natural talent’ at football and didn’t want to get his face messed up in rugby. He tried dancing when he was eight and that was that. He won his first major tournament when he was 10.

‘I’m not a shy person and a little bit of attention goes a long way with me. I wanted to dance and I live for the competitions,’ he says.

Meanwhile, Lauren thinks she got it from her mum, a baton-twirler who competed for England. ‘She was really good!’

For Oskar it was more of a slow burner. While he never really fancied the actual dancing itself — ‘it looked a bit daunting’ — he loved the idea of doing the lifts.

Sadly, aged 13, he joined the wrong dance class and he was told there would never be any lifts but, regardless, has been hooked ever since. Now, every minute he isn’t working is dedicated to dancing, training, weights, cardio and running.

‘It’s not too difficult to find a balance,’ he says. ‘I’m very organised.’

Even so, all have paid for their passion over the years. 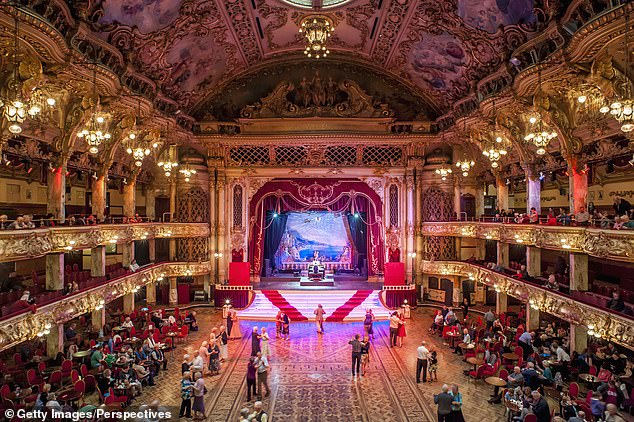 Blackpool Tower Ballroom. In Blackpool’s Dance Fever, we see it all. Everything from the highly-polished chandeliers hanging from the ornate ceiling, to the crisp white dinner jackets of the Empress Orchestra

Not just with injuries — strains, sprains, ligament damage, ruined hips and, in Rebecca’s case, a broken nose when Lloyd accidentally smashed her in the face with his elbow (‘Of course we danced on!’ she laughs).

On top of all that, many of them were teased at school for their rather niche passion.

Lauren was called ‘orange’ for her competition-ready fake tan.

Lloyd was ribbed rotten by his schoolmates. Oskar has always felt the odd one out being one of the few black ballroom dancers in Britain.

But this is a tight, friendly community where everyone knows everyone, support is strong and, more importantly, Strictly has changed everything.

‘Suddenly people are much more interested,’ says Rebecca. ‘Going to ballroom dancing classes is now the number one social thing for couples to do together.’ 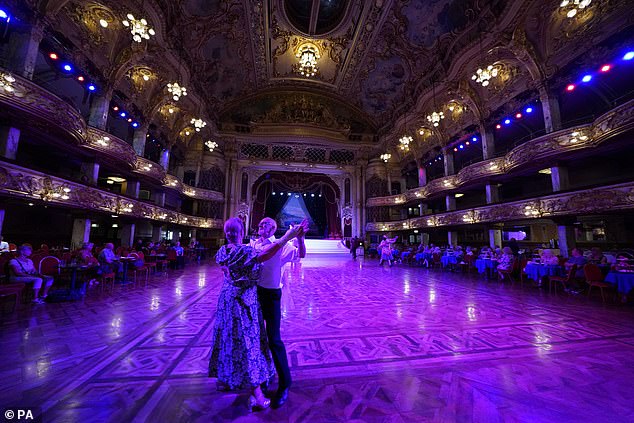 This is a tight, friendly community where everyone knows everyone, support is strong and, more importantly, Strictly has changed everything

No wonder. As well as strength, balance, mobility and flexibility, ballroom and Latin dancing can also improve your cognitive abilities and mental agility.

Not that this lot need to worry about any of this. They’re elite athletes — young and lithe and beautiful and fit.

Which is a good thing, because the commitment required is extraordinary. There’s little time left for anything other than work or dancing. Lord knows how their partners cope. We all know about the ‘Strictly curse’.

Lauren’s long-term boyfriend Joe is a train engineer and can’t dance for toffee. ‘He’s got two left feet,’ she jokes. ‘He doesn’t love it, but he’s always been so supportive.’

Amateurs Lloyd, who runs a social media marketing company, and Rebecca, a dance teacher, have been dancing together since they were 13, despite living more than two hours apart in Wales and Solihull. They have won pretty much every major tournament going, other than Blackpool.

‘I know her inside out. It just works,’ says Lloyd. ‘But a dancing partnership is like a marriage or any relationship: you have to work hard at it to keep it going.’

Rebecca says they are telepathic: ‘I know what he’s going to do before he does it! it comes from years of constantly having to move in synchronisation.’

Amazingly, what with their training, competing, and day-time jobs, they’ve both found time for long-term partners, both of whom are ‘really understanding’.

Which isn’t always how it pans out on Strictly — but perhaps truly committed dancers can tell the difference between physical proximity and lust.

It’s a very punchy competition calendar, with each contest preceded by weeks of last-minute rehearsing of four, separate, perfect dances — the cha-cha-cha, the samba, the rumba and the paso doble. 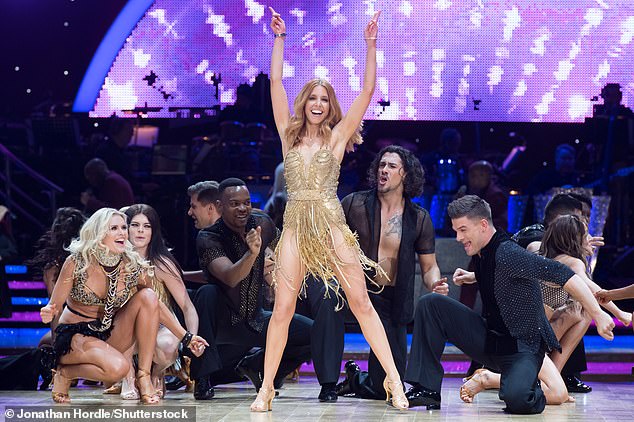 Amateur dancer Lauren Claydon doesn’t have a dress sponsor, so gets hers second-hand. Often they are cast-offs from Strictly

There’s also endless primping and preening and, ideally, the sourcing of a new dress, which can cost thousands. (Lauren doesn’t have a dress sponsor, so gets hers second-hand. Often, like the neon-yellow feather concoction she’s wearing in this contest, a cast-off from Strictly.)

So, after all that, it can be very hard when, suddenly, you’re not called back for the next round and are left to watch from the sidelines, in all your glittering finery.

‘That’s the worst part — you just want to keep dancing, but you can’t,’ says Oskar. ‘It can be very hard.’

I’m not going to tell you how they all fared this year. If you’re desperate to know, you can look it up, but I wouldn’t.

Because this programme isn’t about the winners and losers, it’s about an extraordinary world of hard graft, sacrifice, blisters, joy, commitment and partnership — all driven by hope, love and dreams.

Oskar explains it well: ‘Walking out in Blackpool is like walking into a completely new kingdom. Just like a fairy tale — it inspires you to dance your heart out, to be your best.’

And if it doesn’t work out, it will presumably inspire you to dig deep, do another thousand hours of training, and come back again next year.

Blackpool’s Dance Fever is on BBC1, Monday night at 8pm and is then on iPlayer.