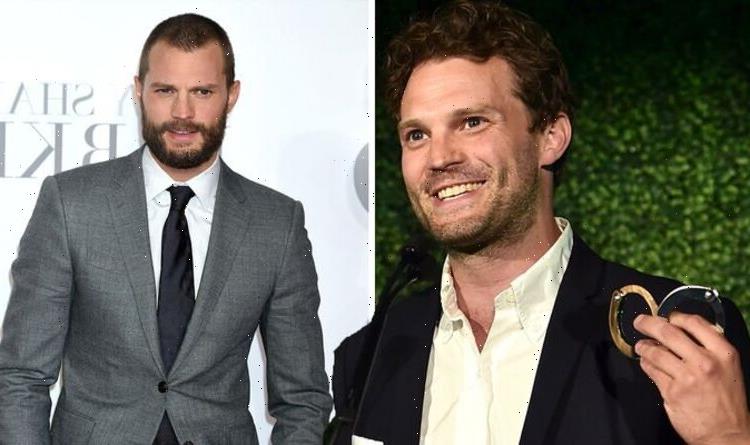 Jamie Dornan, 39, was one of the stars honoured at the annual Oscar Wilde Awards yesterday. When he took to the stage to give a speech, he made a cheeky quip about playing Christian Grey in the raunchy 50 Shades of Grey films.

Jamie and his Belfast co-stars were among the nominees at the awards which celebrate the US-Ireland Alliance.

Taking place at The Ebell Club in Los Angeles last night, Jamie won for his role in the Kenneth Branagh film.

In this, he played Pa in the semi-autobiographical film from the director.

Jamie made a joke about not having a reel of his past roles when he took to the stage.

According to PEOPLE, he was forced to “improvise” as he pulled out some handcuffs.

He said: “In the absence of a reel, I’m just going to act out my entire career.

“Only the things you know best.

“I’m going to need a participant from the audience.”

Jamie attended the awards with his wife Amelia Warner.

However, Kenneth could not attend because he had tested positive for Covid.

Jamie opened up about the success of the film following the win.

He said: “I’m trying to enjoy the moment, but it’s been a long moment, from Telluride in September when it was just Ken and I out there, now it’s been months.

“I think I’ll look back on it and it will have even more resonance of how special it’s been to be a part of this movie.

“The fact it’s resonated so much around the world is absolutely class.

“But it really mattered to us that people at home got it, were proud of it and could stand by it,” he added to BBC News Northern Ireland.

Belfast is up for six awards at the Oscars on Sunday night.

The film is also up for Best Picture at the glitzy awards, which will be taking place on Sunday.

It’s not certain yet if Kenneth and actor Ciarán Hinds, who is nominated for Best Supporting Actor, will be able to attend.

This is because they both tested positive for Covid last week and are now isolating.