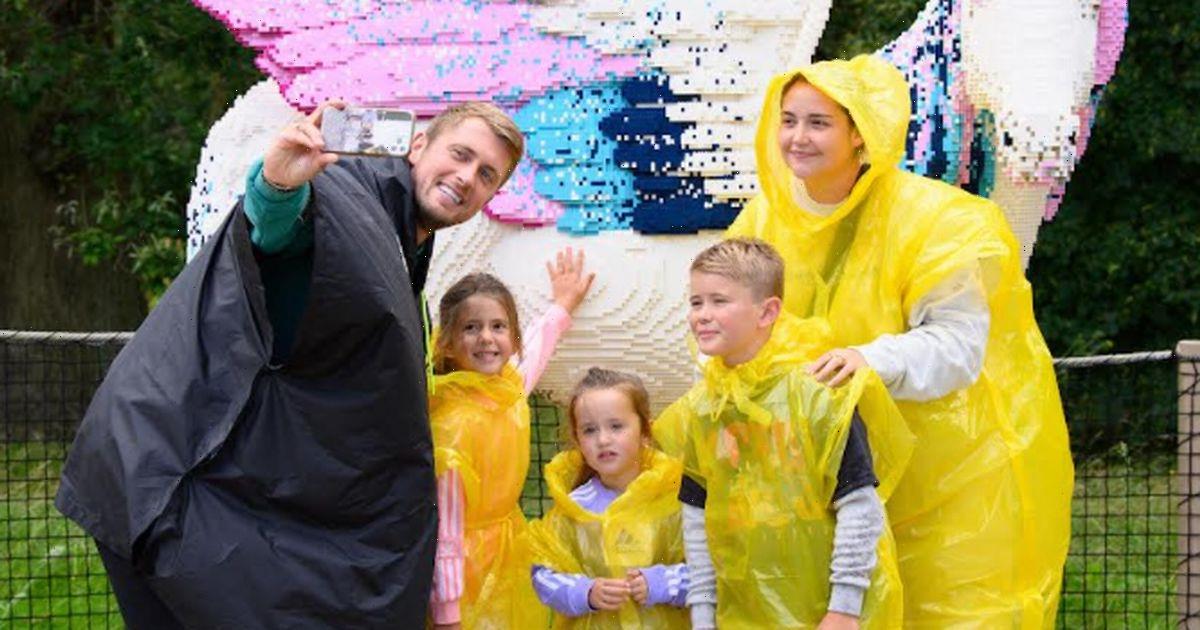 It was smiles and laughter all the way for Jacqueline Jossa, 27, and husband Dan Osborne, 30, as they treated the children to a fun-filled day out at Legoland Windsor on Friday 30 July.

The pair grinned in their yellow ponchos as they enjoyed their time at Legoland with their two daughters Ella, six, and Mia, three.

Dan’s son Teddy, eight, from a previous relationship also joined them on their family day out at the Windsor resort.

The famous family were not put off by the rain and everyone, other than Dan, wore a yellow poncho to keep them dry while Dan chose an oversized black Nike puffer jacket to protect himself from the elements.

Little Mia was pictured looking a tad scared as she joined her mum on the tower drop ride at the resort.

The mum of two looked gorgeous as she went make up free for the family fun day and her long brunette hair was tied back.

She opted for comfort in white trainers and a light tracksuit for the day of memory-making with her family.

As they were kitted out for all weathers, the family opted for a water ride and the Queen of the Jungle and her eldest daughter Ella could be seen looking a little taken aback by the splashing as they held onto the ride.

Before heading home the family took a cute selfie in front of the unicorn made entirely of Lego to mark the memories they had made.

The celeb couple have also been making time for themselves as they were pictured looking 'very loved up' on rare night out without kids recently.

Onlookers said the former EastEnders actress and her hubby were "playfully teasing" one another, laughing and cuddling as they enjoyed a night on the town to attend the swanky launch of TOCA Social in London which was held to celebrate the opening of the UK’s first football-based social entertainment and dining venue at London's O2.

And once there, the couple playfully unleashed their completive sides, by going up against one another on the venue's immersive football game, something Dan was a bit of an old pro at.

It comes as the couple have not ruled out having more children.

A source told OK!: “Jac and Dan haven’t ruled out having more children and they both love being parents. They're in their new house and have plenty of room now, and have had their fresh start, so now would be the right sort of time for that.”

To read more about Jacqueline Jossa sign up for OK!'s daily newsletter here.