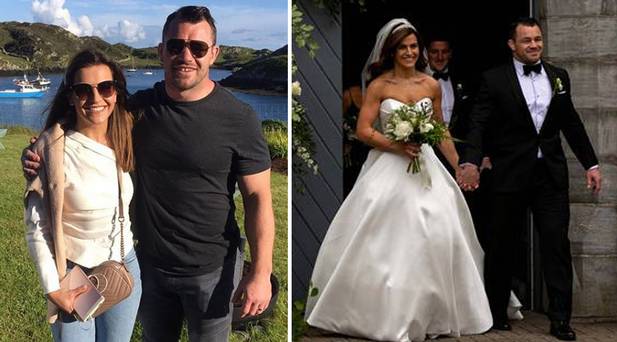 Ireland rugby star Cian Healy has said that married life is “brilliant”, but has put his honeymoon on the backburner this summer.

Healy wed teenage sweetheart Laura Smith in Galway last month in what was one of the biggest celebrity weddings of the year.

The couple spared no expense in renting the entire property at plush Ballinahinch Castle in Galway to celebrate their nuptials with family and close friends, including a number of Cian’s Leinster and Ireland teammates. But it was back to business almost straight away for training.

“One difference is that I’ve been living in hotel rooms with the Irish team for most of it, so I’ve only been at home a total of two and a half weeks,” he told Independent.ie Style. “I didn’t expect that!” He is currently in the middle of pre-season training with Ireland’s World Cup squad in what will be his third time on the team as loosehead prop. For now, the newlyweds’ honeymoon plans have been shelved and they’re open to all sorts of adventure when it comes to their once-in-a-lifetime trip in 2020.

“The honeymoon has been put on the backburner, probably until next summer,” he said.

There are changes aplenty in the Healy-Smith household as they are also building their ‘forever home’, which they hope to move into by the end of September.

The Clontarf native also spoke about his pre-season training for Japan, which has been reported to be among the toughest ever that coach Schmidt has enforced.

“It’s going well, training is testing everyone. We’re getting fitter and stronger, but there’s a nice mix of time off and getting to know each other well,” he said.

“It’s been pretty tough. That’s what’s meant to happen during pre-season. There’s a reason why every player across the world says it’s hell.”

Cian also says that, despite the hype surrounding Ireland’s chances in the World Cup, the team “don’t hear a lot of outside pressure”.

“The only pressure we feel is within the team. There’s no external pressures. But there’s definitely a pressure to perform.”

Cian was speaking at the launch of Bull’s-Eye’s BBQ sauce in Ireland.