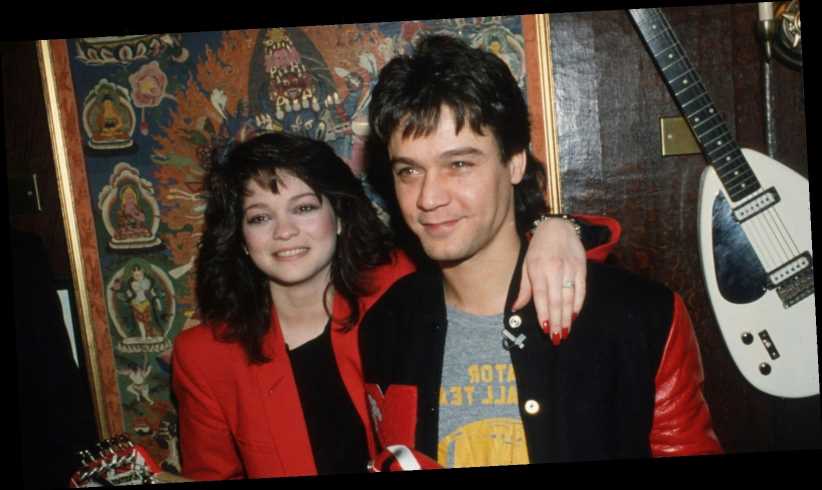 When Wolfgang Van Halen announced the death of his father, rock star Eddie Van Halen, on Twitter, one of the first responses came from a woman near and dear to them both. Actress Valerie Bertinelli tweeted a string of broken heart emojis in response. Bertinelli and Eddie Van Halen were married for twenty years, and raised their son Wolfgang together (via Oprah). Bertinelli and Van Halen separated in 2001 and divorced in 2007. However, the two remained friends, even after their relationship ended.

When Bertinelli and Van Halen started dating, their relationship was puzzling to some. What did the good girl sitcom star see in the bad boy rocker? At first, she just thought he was cute. After her brothers invited her to a Van Halen show, Bertinelli wasn’t sure whether to join them…until she saw a photo of the band. “I took a look at the 8-track cassette that was in the back of my Corvette … and I saw a picture of Ed, and I went, ‘Oh, yeah, I’ll be going. He’s a cutie,'” she told Oprah.

When Valerie Bertinelli arranged a backstage introduction to Eddie Van Halen, the chemistry was immediately apparent. Van Halen’s manager, Noel E. Monk, remembers their meeting in his book, Runnin’ with the Devil. “It was kind of cute to see them together— they were both clearly nervous and somewhat reticent,” Monk wrote. “This struck me as a sign of genuine chemistry. After all, Valerie had spent most of her life in front of a camera or audience; she was completely comfortable with all manner of public interaction. And yet, here she was, stammering and blushing like a schoolgirl in the presence of the captain of the football team” (via Country Living).

For his part, Van Halen was equally smitten. In spite of his rock star persona, Monk reports that “In the presence of this young woman, however, the rock star facade melted away.” Despite their immediate connection, their relationship soon became troubled.

A quick wedding and trouble with drugs

Van Halen and Bertinelli set a wedding date for 1981, just a few months after they’d met (via Oprah). However, problems soon arose. A groupie accused Van Halen of fathering her child, though a paternity test eventually proved negative (via Daily Mail). Monk reported in Runnin’ With the Devil that the morning of their wedding day, Van Halen was so drunk that his bride held back his hair in her wedding dress as he threw up (via Country Living).

Bertinelli insists Van Halen’s behavior wasn’t the only issue. In her memoir, Losing It, she wrote, “The priest we tapped to perform the ceremony gave us questionnaires so he could get to know us better and offer more personal words. As we filled out the forms at home, we each held a little vial of cocaine. Now, if you ask me, those are not two people who should be making decisions about the rest of their lives” (via Oprah).

Bertinelli and Van Halen’s marriage didn’t get any easier over time. When she wasn’t filming One Day at a Time, Bertinelli tried to keep up with her husband’s rock star lifestyle with limited success (via Oprah). Though Bertinelli eventually gave up partying, Van Halen continued to struggle with cocaine addiction (via Today). Beyond the drugs, they had trouble connecting as they both fulfilled their work obligations, sometimes apart. “He had his responsibilities of what he had to do, and I had my responsibilities,” she told Oprah. “And we thought if you just live in the same house there would be a connection, but no.” Infidelity also played a part, on both sides.

In 2001, the pair separated. Bertinelli says her motivation was her son. “One of the many reasons that Ed and I split up is to give Wolfie a better vision of what two people who are supposedly in love treat each other like. Ed and I weren’t treating each other like two people that loved each other, and that’s what Wolfie was seeing,” she told Oprah.

Not everyone would feel comfortable inviting their celebrity ex to their wedding. But after their divorce, Eddie Van Halen and Valerie Bertinelli wrote their own rules. In 2009, Van Halen wed Janie Liszewski, with Wolfgang serving as best man and Bertinelli in attendance (via People). In 2011, when Bertinelli wed Tom Vitale, Van Halen brought Liszewski to watch the ceremony (via People). They still had fun together, which was clear in a photo of the two goofing around with their son on Wolfgang’s Instagram.

The pair didn’t just support each other through the good times. Bertinelli made sure to visit Van Halen while he was in treatment for cancer (via Vancouver Sun). Bertinelli reportedly fussed over Van Halen’s hair and tried to make sure he was comfortable. Being there for each other even after you’ve broken up? That’s real love.