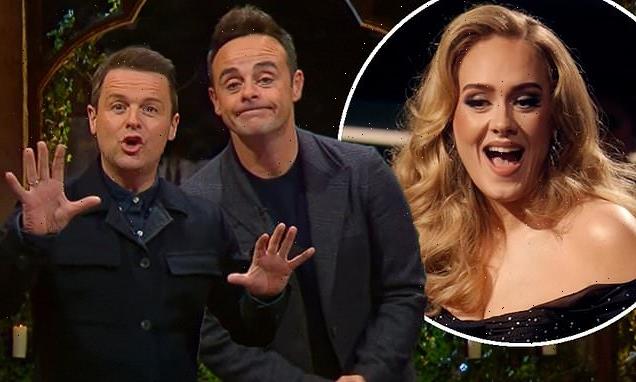 I’m A Celebrity’s launch saw a plummet in viewers by nearly 2million, with a peak of 9million tuning in – in comparison to last year’s 10.9million viewers.

The 21st season of the ITV show kicked off in Wales’ Gwrych Castle on Sunday evening and numbers from overnights.tv, show a peak audience on 9m – a fall of nearly 2m on last year’s debut, which aired on 15 November 2020.

Despite the fall in numbers, the show, which aired from 9pm-10.40pm, remained the channel’s most-watched programme of the weekend, a year on from scoring historic numbers for the launch night in peak lockdown.

ITV scored its biggest Sunday night of the year thanks to the episode and An Audience With Adele which accrued a peak of 5.4million viewers, the third highest rated show of the night – with each show scoring 1m streams at time of publication. 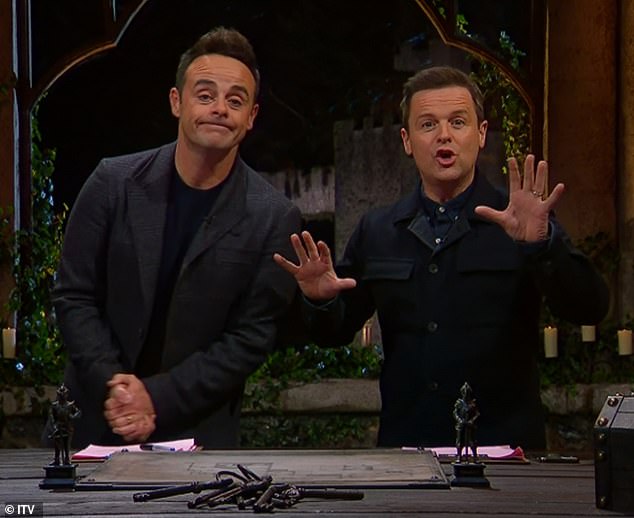 Gruelling: I’m A Celebrity’s launch saw a plummet in viewers, with a peak of 9million tuning in – in comparison to last year’s 10.9million viewers

The peak of viewers last night stood at 9million, following last year’s dizzying numbers, which were no doubt aided by the countrywide lockdown.

Next to a peak of 9m, the brand new series achieved an average of 8million viewers and a 46% share of TV viewing. The launch show was a hit with younger viewers, with a massive 73% share of all 16-34 year olds watching TV at that time.

Last year, an ITV press release detailed the show’s success, reading: ‘The new series of I’m A Celebrity Get Me Out Of Here has broken the record for the number of viewers for the launch, with 14.3 million watching the show’s first episode.

‘The show reached an audience of 13.8 million TV viewers over the first seven days of its availability, with a 52% audience share. An additional 0.5 million viewers also watched via non-TV devices taking the total to 14.3 million viewers.’ 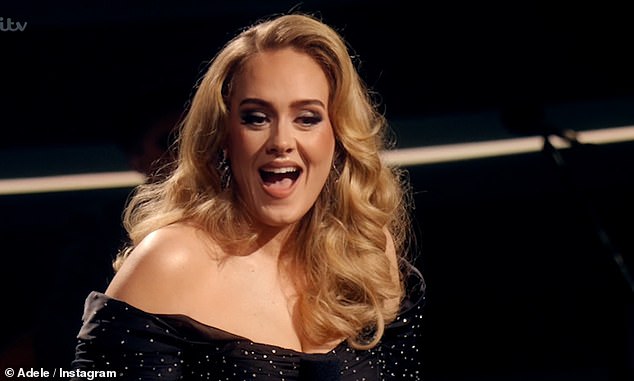 Starring role: ITV scored its biggest Sunday night of the year thanks to the episode and An Audience With Adele which accrued a peak of 5.4million viewers

The first instalment of the 21st series as not short of jaw-dropping challenges as ten new celebrities threw themselves into the gruelling experience.

Filmed for the second consecutive year at Gwrych Castle the campmates’ previous life of luxury soon became a distant memory as they braced themselves for up for up to three weeks of castle surroundings and Welsh countryside. 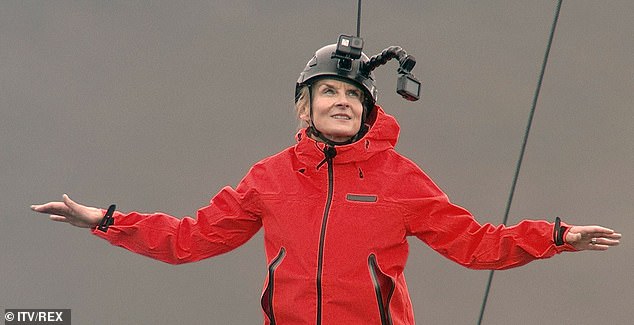 The opening challenge saw Danny Miller thrown from a cliff when the first challenge of the series, Walk The Plank, was introduced after the first group – Louise , producer Naughty Boy, DJ Snoochie Shy and Danny – landed in a helicopter.

Ant said: ‘This year is going to be tougher than ever, all the celebrities will face gruelling challenges on their way to the Castle to win the keys to the Castle’, while the other option was the stars headed to the ghastly Clink.

After a slew of tasks, the stars were split into their groups and made their way to their respective camps. 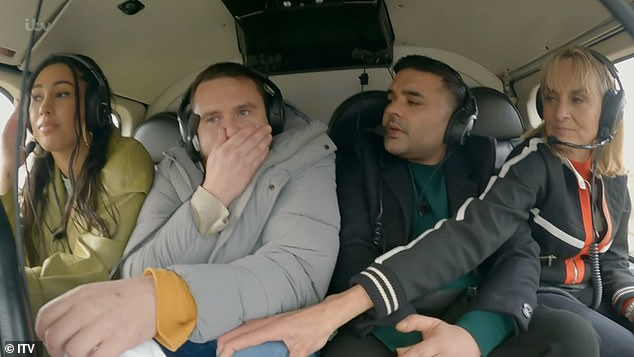 Unwell: Danny held back a bout of sickness as they rode in a helicopter

BIGGEST MISCONCEPTION TO DISPEL IN THE CASTLE: It’s nice to be able to show the fun side of me rather than the serious news presenter.

PHOBIAS: The idea of small, enclosed spaces with cockroaches and spiders is horrific!

ROLE IN THE CAMP: I will give out hugs and make the food more edible!

MISS MOST: My comfortable bed and lovely bath.

DREAM CAMPER: Angelina Jolie and Daniel Craig – we wouldn’t have a problem getting stars if he were in the Castle.

BIGGEST MISCONCEPTION TO DISPEL IN THE CASTLE: People always see me as very composed and serious on the diving board. This will be a nice opportunity to let people get to know me better.

ROLE IN THE CAMP: I don’t mind helping out with cleaning.

MISS MOST: My bed!

BIGGEST MISCONCEPTION TO DISPEL IN THE CASTLE: People know me as a very bubbly person but when I am outside of my comfort zone, I can be shy.

ROLE IN THE CAMP: I love twerking on a Friday night and I’m going to teach everyone how to do it in the Castle!

MISS MOST: My cat and lip gloss.

BIGGEST MISCONCEPTION TO DISPEL IN THE CASTLE: Nothing. I don’t worry about what people think.

PHOBIAS: Heights. I’m not sure how I will feel if I have to walk across a plank very high up!

ROLE IN THE CAMP: Cook and interviewer. I love finding out about people’s lives.

MISS MOST: Aside from Judy and my family, not knowing what is happening in the news. I am a news junkie.

DREAM CAMPER:  The late Jimmy Greaves. I would have loved to chat about goal scoring in the Castle with him.

BIGGEST MISCONCEPTION TO DISPEL IN THE CASTLE: People don’t really know the real me at home and I’d like to show people the motherly side, the side my family sees.

PHOBIAS: I am hoping I will overcome my fears to take part in the Trials!

ROLE IN THE CAMP: Mum and to organise some fun dance routines!

MISS MOST: My notepad and pencil –I am known for always having to write down ideas.

DREAM CAMPER: Giovanna Fletcher –she is such a lovely, warm person.

BIGGEST MISCONCEPTION TO DISPEL IN THE CASTLE: People don’t know the real me and I want everyone to get to know me.

PHOBIAS: Confined spaces and heights but I want to give the Trials a go to bring back some stars.

ROLE IN THE CAMP: Castle chef and someone who everyone can confide in.

MISS MOST: My mum. I live with her and it’s going to be hard being away from her.

BIGGEST MISCONCEPTION TO DISPEL IN THE CASTLE: Great to be able to show people with all disabilities they can try different things in life.

ROLE IN THE CAMP: Chef – so long as there isn’t too much pressure to make the food interesting!

MISS MOST: TikTok, my mum and dog.

BIGGEST MISCONCEPTION TO DISPEL IN THE CASTLE: None because I never hide behind a false image. What you see is what you get.

PHOBIAS: I am going to tell you when I am in the Castle!

ROLE IN THE CAMP: Chef. I enjoy cooking at home and I will be hoping to add some garlic and rosemary to the food.

MISS MOST: My partner and my little girl. It’s going to be tough.

CLAIM TO FAME: The Saturdays star

BIGGEST MISCONCEPTION TO DISPEL IN THE CASTLE: People think if you are in a pop group, you lead a glamorous lifestyle and won’t get stuck in, but I’m determined to muck in with all the chores.

ROLE IN THE CAMP: The serial hugger.

MISS MOST: Wayne and my boys.

BIGGEST MISCONCEPTION TO DISPEL IN THE CASTLE: None but I would like to show everyone what I am like in real life rather than my soap character, Aaron Dingle.

PHOBIAS: I am absolutely dreading the eating Trials! I fear I will gag!

ROLE IN THE CAMP: A shoulder to cry on and a person everyone can come to if they have a problem.

MISS MOST: My fiancée, Steph, and our new baby.

DREAM CAMPER:  Fred Sirieix or any ex football player. I won’t be able to leave them alone asking lots of questions!