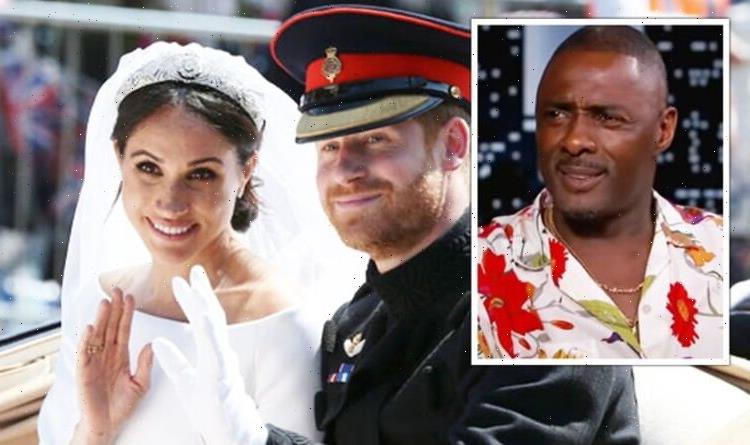 Meghan Markle and Prince Harry tied the knot at St George’s Chapel in Windsor Castle in May 2018 and the couple will be celebrating their fourth wedding anniversary next month. Actor Idris Elba, who acted as the DJ at their royal wedding, confirmed that his sweet gesture was purely a gift and he had no intention of being paid.

His comment comes after the Luther star was quizzed about his appearance at the star-studded event which made global headlines.

The 49-year-old attended the occasion alongside his wife Sabrina Dhowre Elba and the couple was among the celebrity guest list that included George and Amal Clooney, David and Victoria Beckham, Serena Williams and Oprah Winfrey.

Speaking on Jimmy Kimmel Live, the Wire actor opened up about the couple’s nuptials and gave an insight into the big event in a candid interview last week (April 6).

Jimmy asked: “You’ve talked about this before. You DJ’d at the royal wedding?

“Did you get paid for that?”

Idris sported a stunned expression on his face as the actor shook his head.

“What? Nothing?” Jimmy quizzed further.

Idris chuckled: “No. It was a gift to my friends.”

The on-screen star has a close relationship with the Duke and Duchess of Sussex and he has been friends with Prince Harry for a number of years.

He went on to joke that he couldn’t afford a decent gift so asked the couple if he could entertain guests with his musical tastes.

“I’ll play anything that they want.”

Jimmy nodded as he remarked on what guests could possibly buy a royal couple.

The film star recently revealed the song which Meghan asked him to perform at her wedding.

The star said he was asked to play a song by rapper Dr. Dre when he spun records.

The star said that Meghan made a special request for Still Dre, a 1999 hit song featuring Snoop Dogg.

Alongside his acting work, Idris also performs as a DJ.

He starred in the Netflix show, Turn Up Charlie, in which he played a struggling DJ trying to rebuild his career.